Singapore-based social media agency GOODSTUPH, a sponsor for Pink Dot for three consecutive years, has produced merchandise for Pride Month for the first time. Limited edition t-shirts and a limited run of risograph prints are sold at its online retail arm THE DAMN GOOD SHOP, and all profits will be donated to Pink Dot.

The design adapts the GOODSTUPH communist-inspired brand DNA, featuring a pun on the Chinese words “同志们”, which means comrades in English, as well as a slang to describe homosexuals. The risograph prints are produced by local print studio, Knuckles & Notch.

“We hope to sell out. At this point, we have sold 50% of our stock within the last 24 hours since launch, so it looks promising,” said GOODSTUPH founder Pat Law. In a statement, the social media agency said it remains “committed” to being a sponsor for Pink Dot for as long as it can. 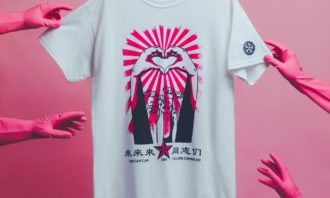 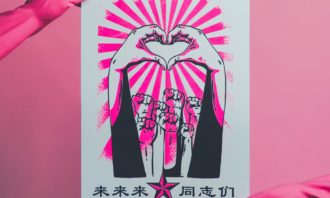 GOODSTUPH has done work for the community in the past. They include production of Mambo Jambo tees in partnership with Zouk for its last party at Jiak Kim Street and launch of a donation campaign for the Cat Welfare Society. It also helped spread awareness about refugees in Malaysia through a pro-bono film featuring social enterprise PichaEats.

For its 11th edition, last month Pink Dot SG launched a social media campaign  to raise awareness on pertinent issues that impact the daily lives of LGBTQ people. It currently has over 60 businesses which have pledged to support the movement. These range from ad agencies TSLA, GOVT as well as eateries Bollywood Veggies, Straits Clan and automotive company Alfa Romeo. The movement is led by Kathy Teo, founder and managing director of Xpointo Media, John Chen, co-founder of Aloha Poké, Goh Shu Fen, co-founder and principal of R3 who is sponsoring via nowyourmind, and Tracy Phillips, director of PPurpose.

However, a day after Pink Dot SG unveiled its new ambassadors, Ah Boys to Men actor and local rapper Tosh Rock copped flak from netizens for his past derogatory comments against homosexuals. Through an Instagram post, Tosh apologised for his remarks which were made over a decade ago and shortly after, stepped down as an ambassador for Pink Dot SG. Nonetheless, over the years Tosh persistently also pushed for LGBTQ rights in Singapore, standing against the legislation of Section 377A of the Penal Code in Singapore, and has constantly voiced his stance in equality for the LGBTQ individuals.

Which marketing functions are likely to be affected by in-housing?

This marks the debut of the DoubleTree by Hilton brand in Suzhou City. ..

How can e-commerce players guard themselves against fake reviews? ..

Marketers, are you tracking your content the right way?

"If you are growing a brand, you don't want to be the guy spending money but not getting anywhere." ..