Meanwhile, WhatsApp and Lazada came in second and third with a score of 49.4 and 45.6 respectively. Electronics manufacturer Huawei also made it into the top ten, placing itself in the eighth place with a score of 41.0. Overall, YouGov said digital brands have a strong presence in Malaysia, with  closely behind. 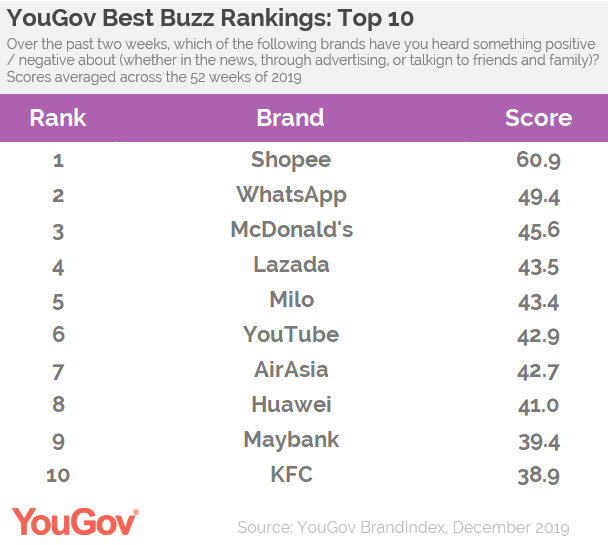 Payment service providers such PayPal and Visa made into the top ten as well, having an improvement score of 3.5 and 1.8 respectively. Other brands that saw an improvement in their Buzz scores were Sephora, Safi, Samsung, Similac, and Etiqa. 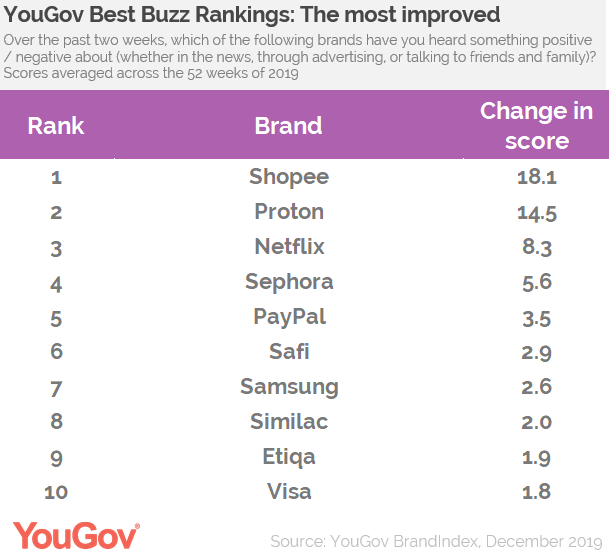 Ervin Ha, head of data products said Shopee’s high scores reflect its brand health. “Shopee has clearly done a fantastic job in getting people talking about the brand, taking the top spot for the first time, and rising fast in the rankings. Its clever localised ads and persistent marketing across the nation have worked well,” he added.

YouGov BrandIndex measures the public’s perception of brands on a daily basis across a range of measures. The annual rankings are compiled using Buzz scores from across all 52 weeks of last year. Buzz scores measure whether people have heard anything good or bad about a brand during the previous two weeks.

OYO partners OOH firm Rodeo to spice up its rooms

The digital canteen is a mobile kiosk comprising a tablet listing a wide array of healthy food choices, including vegetarian and l..

Apple is headed for a likely showdown over some not so subtle changes it is asking publishers and brands to comply with it - or el..

Done in partnership with Entropia Rouge, the videos have amassed close to 10 million views since its launch in September...

Malaysia Airlines described the superimposed images to be done "in bad taste". ..

It aims to quadruple its Originals slate by year end 2019, adding at least 12 original television series and 30 movies. ..