Circles.Life does it again, but this time with a breakup letter on Australian The Courier Mail newspaper. The Singapore-grown telco Circles.Life, known for its cheeky ads and marketing stunts, revealed that it orchestrated a “heartbroken Charlotte” letter on The Courier Mail newspaper to call out toxic relationships with telcos (not a move completely unfamiliar to our Singapore readers).

According to the telco, through garnering feedback, it noticed that Australians have been unhappy in their relationships with their telcos. Circles.Life turned these complaints into an advertisement disguised as a breakup letter by an allegedly heartbroken lady called ‘Charlotte’.

Circles.Life first launched an unbranded ad in The Courier Mail, which was disguised as a breakup letter written by Charlotte, to her then-partner, “T”. 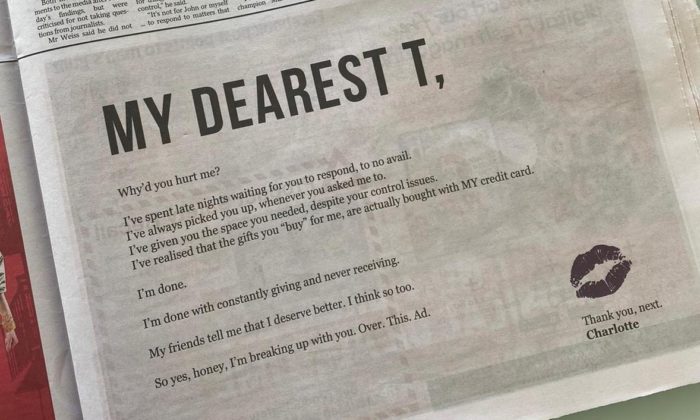 The telco said it followed online conversations and noticed that readers and netizens were "intrigued by the bold move" on Charlotte’s part, and she was the topic of the day. The next day, Circles.Life launched a “response” (pictured below) to Charlotte’s breakup letter in the same paper. It also empowered Telstra and Vodaphone customers to break up with their telcos with the promo code “BUHBYE”. 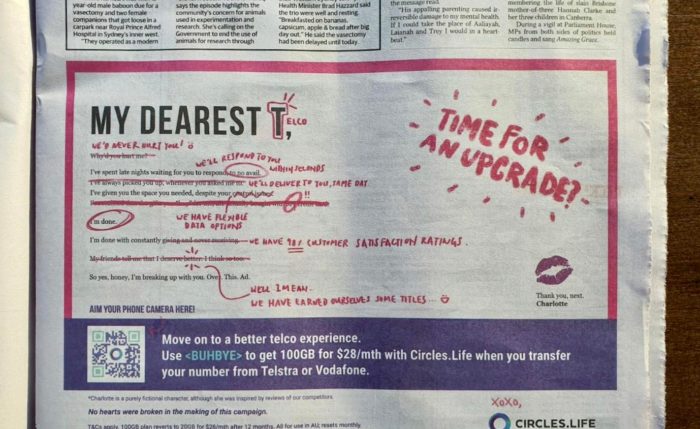 The telco which launched in Australia in September last year, took this move to highlight how the Australian telco experience is likened to an unhappy relationship and Circles.Life's promise of being a better telco experience for all. The campaign was conceptualised in-house.

A Circles.Life spokesperson said to Marketing that its data showed that there has been complaints from consumers regarding delays/action in resolving phone or internet issues (34.1%); disputed charges or fees (25.5%); and delays connecting or changing service providers (12.8%).

"Yet, despite that, many consumers still stick to their telco providers," a Circles.Life spokesperson added.

Delbert Ty, head of marketing, Circles.Life said: “We wanted to show Australians that it’s as toxic as a relationship and nudge them into taking the step towards being with a telco that will never let you down."

The witty ad comes not long after Circles.Life bagged an undisclosed amount of funding from private equity firm Warburg Pincus to grow and become cash-flow positive in existing markets Taiwan and Australia. A Circles.Life spokesperson told Marketing then through this funding, the telco aims to scale its personalised digital services vertical to increase customer engagement.

The telco was birthed out of frustrated Singaporeans Rameez Ansar, Adeel Najam and Abhishek Gupta who claimed that they faced lock-in contracts, poor customer service and rigid mobile plans just like the rest of Singaporeans. The telco which entered the Singapore market three years ago, has constantly banked on giving freedom back to consumers.

The brand is also known for its tongue-in-cheek stunts and audacious on-ground activities, and has over the years grown in prominence. Last week, it released a "cat" onto the streets and public transport around Singapore to test out its 4G+ coverage. This came as part of an ad on The Straits Times, which was addressed to fellow telco friends. The ad read: “Our customers are the best. We’re grateful and humble to have each and every one of them in our experience. Thanks Singapore for continually ranking us #1. Must be all that ‘power to the people’.”

Circles.Life also made headlines for its open letter to big boy competitors Singtel and StarHub accusing the two of mimicking its plans and products. This saw the brand then receive a taste of its own medicine when fellow challenger telco Zero Mobile took shots back at it.