The strength of the Halal market has been discussed at length and more brands are now trying to find ways to tap into the market. In a latest attempt to decipher the market, JWT has zoomed into the young Muslim women in Malaysia and Indonesia to understand their views on brands.

Labelling these young women as “Muslimah”, JWT’s report classifies the Muslimahs as more cosmopolitan in outlook as consumers, compared to older generations of female Muslims. Yet, they are also more religiously observant (as seen by increased adoption of the hijab, or Muslim headscarf).

When it comes to showing preference for a brand, these women are found to think most highly of Japanese brands - ahead of European, Korean and American labels. Approximately 48% describe Japanese brands as “excellent,” followed at a distance by European (29%), Korean (26%), and American brands (23%).

Moreover, Japanese brands are “banking on their cachet in Southeast Asia, and not just in the traditional categories of electronics and cars”, said the report. Last year, Fukusa launched a hijabi fashion line in Indonesia which uses silk kimono fabric. The company said it hoped to reinvigorate the Japanese kimono industry while building bridges with Muslim countries. Another brand that has banked on this trend is Japanese company Shiseido which recently created products in its Za cosmetics brand certified as halal. 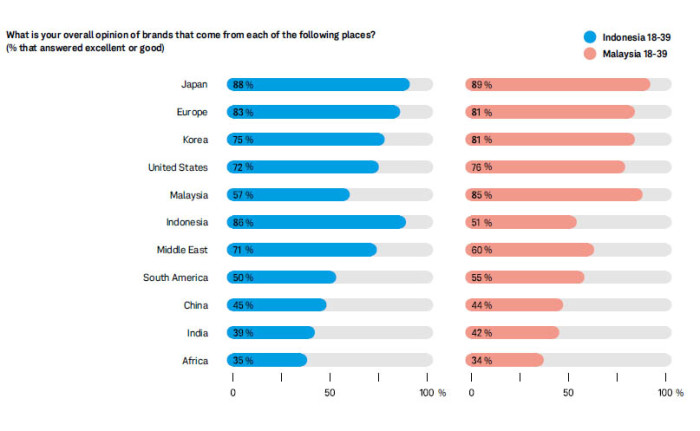 Meanwhile, global giants such as Unilever also introduced a line of Sunsilk Hijab shampoos and conditioners, formulated to help tackle issues associated with wearing a head covering, such as sweaty hair and an oily scalp, as well as to prevent hair loss.

The study also said that while both Indonesia and Malaysia share many new and emerging attitudes and behaviours, they are by no means homogeneous.  For example, while 82% of young Muslim women in Indonesia think ads reflect reality, only 56% of young Malaysian Muslimah feel the same.

The study adds that the halal logo from regulators is increasingly important when it comes to buying decisions. This is not the only consideration, however, as organic and natural products are also popular. Young Muslim women have different levels of halal adherence and what constitutes halal is itself being constantly negotiated. It has now moved beyond the traditional realm of food. 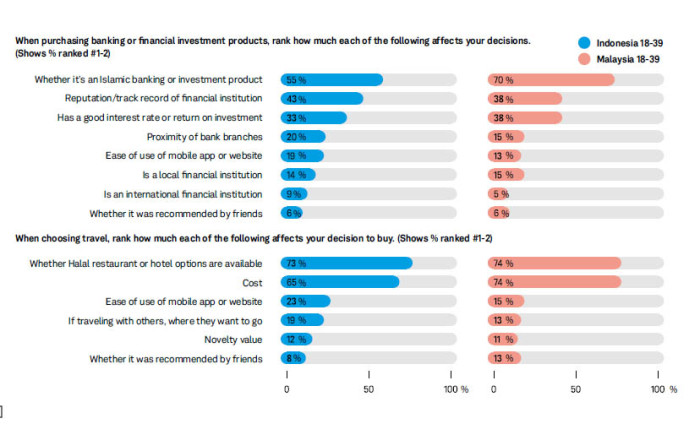 Halal products now encompass personal care and, to a lesser but still significant degree, travel, banking and other services.

Many of these women are also shopping online with 31% of women in Indonesia and 24% in Malaysia making online purchases at least once a week. About 75% in Indonesia and 58% in Malaysia shop online at least once a month. Popular items they would hunt for online are clothing and beauty products, followed by technology, travel and groceries. One third of women use payment apps, mostly Google Wallet or Samsung Pay. 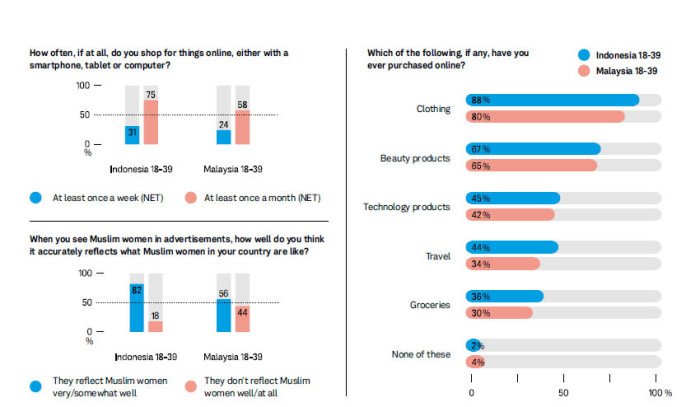 All of these women currently own a cell phone or smartphone. Samsung is the leading brand, with 51% of young women in Indonesia and 35% in Malaysia owning a Samsung phone. The next most popular brand is the iPhone —14% of young women own an iPhone in Indonesia and 17% in Malaysia. WhatsApp, Facebook, and Instagram are the most popular social media tools they use on a daily basis. 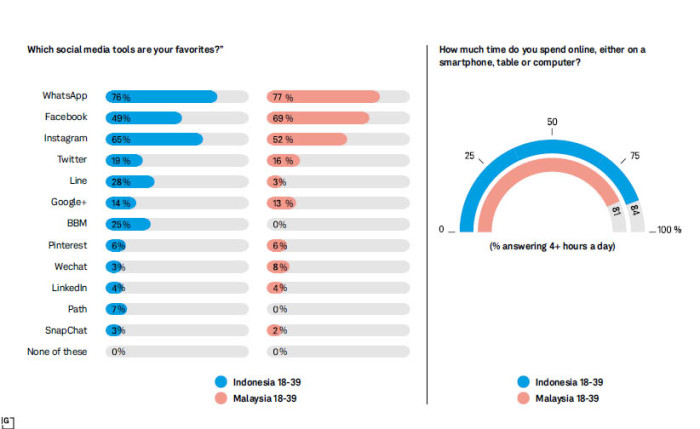 “The two trends [of being] more Islamic and more global have created a space of conflict, negotiation, adaptation and innovation that’s playing out across sectors,” Chen May Yee, APAC director of JWT Innovation Group, explained. Currently, almost all the women surveyed feel there are now more opportunities for women. Yet many also feel young women should have more freedoms than they do currently, as well as a stronger voice in their community and in government.

About one third of women travel outside their country at least once a year. Favourite destinations for Indonesians include Asia (Japan, Singapore, Korea, Thailand) and Europe; Malaysians favour Asia (Indonesia, Japan, Korea, Thailand), Australia and New Zealand; and Korea is a more popular destination for younger women than older women. When selecting a destination, women factor in cost and the country’s friendliness towards Muslims (people and government).

Halal is a top priority when buying food - nine out of 10 women say it is "very important." It is also very important when purchasing personal care products such as shampoo (66%), clothing (42%) and travel (34%).

Worldwide, the Muslim market was estimated to be worth US$1.9 trillion in 2015 and is now expected to grow to US$3 trillion by 2021. But more importantly to marketers is how the nature of the market is changing. This pretty untapped market per se is lucrative, with 40% of some 240 million of Southeast Asia’s population being Muslim.

“The New Muslimah” report examines young Muslimah in Malaysia and Indonesia and how they are driving an explosion in halal fashion, beauty, technology and food. It includes a survey of 500 Muslim women in Indonesia and 500 Muslim women in Malaysia in August 2017, as well as interviews with media influencers and researchers and original case studies.

The majority of the participants were Millennials, with 77% of women surveyed aged 18 to 39 and 23% aged 40 and over. About 90% of those surveyed were urban or suburban and concentrated in Java, Indonesia and the central region of Malaysia. On average, 68% were employed full-time, with 7% employed part-time and 8% self-employed. The women surveyed were highly educated, with 66% of Indonesians and 56% of Malaysians having completed an undergraduate degree. 60% were married.