Southeast Asian eCommerce platform Shopee has emerged top in YouGov’s annual BrandIndex Buzz Rankings in Indonesia, making it the most talked about brand of the country in 2019. With a buzz score of 59.6, Shopee takes over the four-year defending champion, Garuda Indonesia, who landed on the fifth place with a score of 54.6 this year. It is Shopee's first time topping the charts, according to YouGov.

Digital brands seem to be talk of the town, with WhatsApp, YouTube, eCommerce site Tokopedia, digital wallet GO-PAY, Samsung, and digital payment platform OVO dominating the top ten rankings. WhatsApp lands itself in second place with a Buzz score of 57.5, YouTube in fourth place with 55.4, Tokopedia and GO-PAY tying in sixth place with the same 54.1 Buzz score, and OVO in ninth place with 51.6. 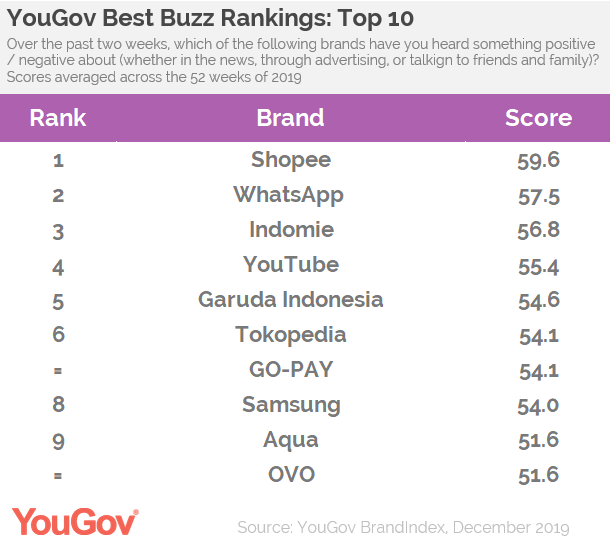 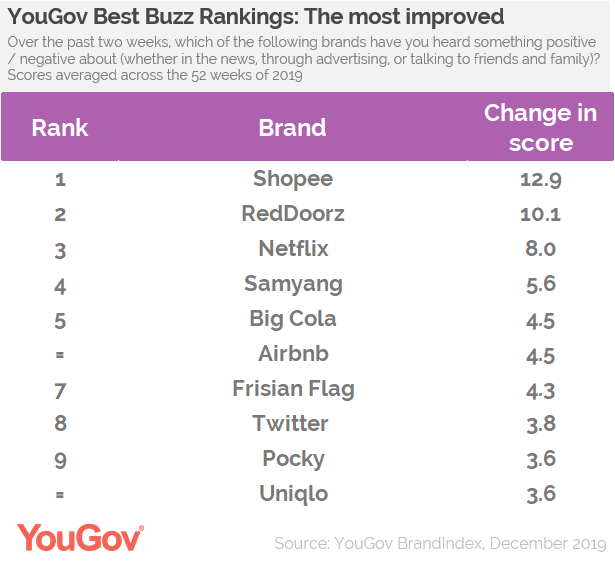 Ervin Ha, head of data products, said that Shopee has not only topped the charts to be the most positively talked about eCommerce brand in an "increasingly crowded" eCommerce space, but also the "overall brand in the nation". He added that Shopee has "effectively won over Indonesia", and it may be due to its innovative campaigns or its global ambassador.

YouGov BrandIndex measures the public’s perception of brands on a daily basis across a range of measures. The annual rankings are compiled using buzz scores from across all 52 weeks of last year. buzz scores measure whether people have heard anything good or bad about a brand during the previous two weeks.

Shopee has been doing well in similar rankings in Malaysia. In the same ranking system, Shopee also topped the charts to be the most positively discussed brand in Malaysia in 2019. Last year in a similar YouGov report, the eCommerce platform ranked highest advocated brand in Malaysia for the second year in a row as well.