According to Zenith’s Programmatic Marketing Forecasts (2019), an estimated US $98 billion of digital advertising budgets will be spent on programmatic media buying in 2020. Is this digital trading convenience limited to digital inventory, or can these benefits extend to traditional media too?

Print publishers, TV channels, and other traditional media owners are facing multiple challenges. Not only must they keep up with their traditional competition, they must do so in shrinking markets being cannibalised by newer media classes.

Their fundamental problems are the inability to transact natively with buyers in the language of audiences rather than just inventory spots, the lack of access to relatively frictionless electronic channels, technical constraints stemming from antiquated back-end systems, and the shrinking margins imposed by the pincer effect of declining revenues and the high cost of traditional organisational structures and processes.

Media buyers too face structural and systemic challenges. Communication with suppliers is conducted over relatively unstructured channels such as email and phone calls. Negotiations are time-consuming and susceptible to misinterpretation and dispute. It is hard to assess the performance of media campaigns and implement mid-course corrections. The availability of inventory is not immediately ascertainable. It is difficult to keep track of changing portfolios of media owners, and complex sets of negotiated rate contracts.

On both sides, systems have to be manually updated by the respective counter-parties to a trade, and the absence of a single source of truth leads to costly post-booking disputes and resolution processes.

The solution to the traditional media market's problems comprises a few interdependent elements.

To be successful, a solution must be accepted by all major players in the media industry, and a basic pre-requisite is that the platform is not controlled by any one of them. An industry platform has to be operated by a neutral and trusted provider that guarantees a level playing field for all.

An industry platform should also standardise or harmonise elements, such as ad sizes in print, and program lengths in broadcast media. These need to be expressed in units that are uniform and intelligible to media buyers. Media owner portfolios, inventory holdings, contracted rates, etc., need to be held in a single trusted repository, a "source of truth", that both counter-parties to a transaction can rely on.

Buyers and sellers not only need a structured medium where all communication may be found in one place, but also one that is legally binding and logistically simple. With media transacting, every significant event (bookings, amendments, cancellations) is a legal contract, which means that both counter-parties to an agreement must commit to it willingly and unambiguously before it can be formalised.

A transacting platform must therefore implement a two-way handshake protocol that solicits the explicit agreement of both counter-parties, and unambiguously signals to both of them whenever a trade is concluded, amended or cancelled.

Such an architecture should also be agnostic to the media class being traded. It should be extensible to support transacting in composite bundles of inventory of more than one media type, e.g., print, outdoor, digital and broadcast media, and should support additional non-inventory elements such as production costs.

Buy on Platform (BOP), a product of the Australian media market, was developed with the initial goal of making print inventory easier for agencies to buy. But from the very beginning, BOP has consciously implemented the three elements listed above, in order to provide a more generic media transacting platform.

BOP is controlled by neither media owners nor buyers. The platform provider (Publisher's Internationalé) is a neutral market player with an established reputation. The platform itself is designed and operated to be fair, secure and confidential, and it is periodically audited to the satisfaction of all players. Its database acts as a single source of truth to all parties.

BOP implements a two-way handshake protocol to formalise any media booking, amendment or cancellation. Further, it provides an in-built communication channel that captures all negotiations in a single place, and maintains a non-repudiable audit trail of all decisions and agreements, as a means to avoid future disputes. A system of email notifications on all significant events completes the set of mechanisms that make transacting seamless and foolproof.

BOP's extensible architecture enables it to trade all formats of print inventory today, such as display ads, inserts and classifieds, while positioning it to support other media types (e.g., radio, TV, outdoor and digital) in the near future.

What’s the status of BOP?

The promised benefits from these features may seem too good to be true, but BOP is now flushed with success after two high-profile, live campaign trials in the Australian market. Two reputed media agencies (Universal McCann and The Media Store) have put BOP through its paces for their flagship clients (the Australian Federal Government and Toyota Motor Corporation Australia, respectively).

Both agencies describe the platform in superlatives.

Simon Grace, UM’s Head of Government Partnerships says, "We see that the trial has been extremely successful and we see BOP as a great tool for transacting in the purchase of print media for the Australian Government and potentially other clients. Key benefits of BOP include: 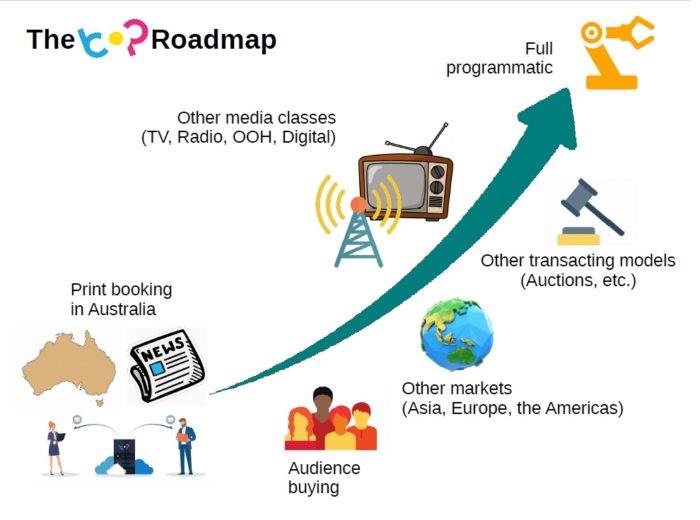 "At a minimum, we believe that BOP would save 50% in time required to book, confirm, check and load a campaign […] And with more bookings and our templates developed within BOP, we see this saving growing over time," he adds.

David Lodge, Group Head Toyota at The Media Store, says, "The promise of BOP is to deliver greater efficiencies, not only for agencies but also for our Publisher partners. We at The Media Store were excited to trial BOP and have that promise realised. We have seen firsthand that BOP truly improves the print buying process for Agencies."

The Media Federation of Australia, a consortium of media buyers, says in a statement, "BOP makes print much easier and efficient to deal with, and zero account queries."

Peter Miller, CEO of TheNewsMediaworks, a publisher consortium, says, "The team behind BOP has developed an intimate understanding of the complexities of print media transaction. It has been demonstrated that these processes at the buying end of the process, primarily within media agencies, can be streamlined by the platform."

What BOP means for traditional media

BOP has already demonstrated dramatic ease-of-transacting efficiencies and reduction in account queries in the print media campaigns it has executed for UM and The Media Store.

Publisher's Internationalé Australia chief executive Charlton D'Silva says, "BOP is a world first, as it is the first platform to bring end-to-end automation to traditional media, with detailed support for all the elements of tradecraft from brief/proposal creation to creative management to billing systems integration. Print was the low-hanging fruit that we tackled first, but other traditional media are not far behind on the BOP roadmap."

Revenues of traditional media are under pressure from the shift of audiences to digital. D'Silva says BOP could be used to reverse ad sales declines. "I would expect at least 10 per cent growth (from using the platform). Frictionless trading means ease of doing business, which means greater share of deployable budgets." he says.

He estimates BOP could cut sales costs for media owners by more than 30 per cent.

The team behind BOP is not content to rest on its laurels. After the enthusiastic reception to its debut in the Australian print market, BOP is gearing up to exploit its extensible architecture to conquer new horizons.

CTO Ganesh Prasad perceives print as just a starting point for BOP. He says, "We have had diligence meetings with several TV, radio and outdoor companies, locally and internationally. BOP can be readily adapted to meet their needs. We will enhance the platform in tune with market demand. Localising the platform to deploy in another country should take no longer than 3 months (a quarter), so we can make a real and immediate difference to a market.

Prasad adds, "BOP is not just a system to help buyers request bookings from media owners. It has been designed to handle a number of current and future trading situations. Full programmatic capability is just a screwdriver turn away."

The market for traditional media worldwide looks set for a revolution. This is a space to be keenly watched.

The article first appeared on the September 2019 issue of Marketing Magazine.