Southeast Asian consumer confidence continued its steady rise in the first quarter of 2015, reaching the highest level recorded to date, according to the latest Nielsen Global Survey of Consumer Confidence and Spending Intentions.

Underlying the results were consumers’ strengthening confidence in the state of their personal finances and a growing willingness to spend.

The survey of more than 30,000 online consumers in 60 countries ranked consumers in Indonesia, the Philippines, Thailand and Vietnam among the most optimistic consumers in the world.

In Singapore, consumer confidence was steady at 100 points.

In Malaysia, consumer confidence rebounded by five points to 94 in Q1 2015. However, uncertainty surrounding the introduction of a goods and services tax saw close to one third of consumers (31%) flag the economy as their greatest concern. 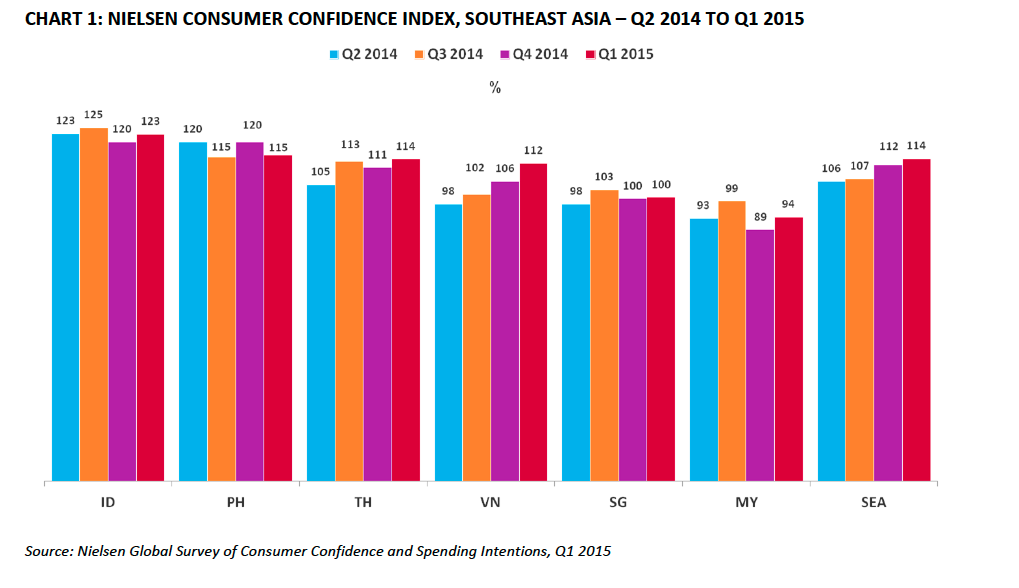 A score above and below a baseline of 100 indicates the degree of optimism or pessimism. There were 14 countries that scored 100 points or more.

Consumers are also feeling positive about their personal finances, and by extension disposable income, which is helping to drive overall sentiment and highlights potential increases in consumer spending, Upadhyay added.

More than two-thirds of Southeast Asian consumers (68%) hold a positive view of local job prospects over the coming 12 months, with the outlook strongest in Indonesia (74%) and the Philippines (73%), compared to 50% globally.

Malaysia was the only country in Southeast Asia that returned a score beneath the global averages for job prospects and personal financial outlook over the next 12 months.

Attitudes on saving vs spending 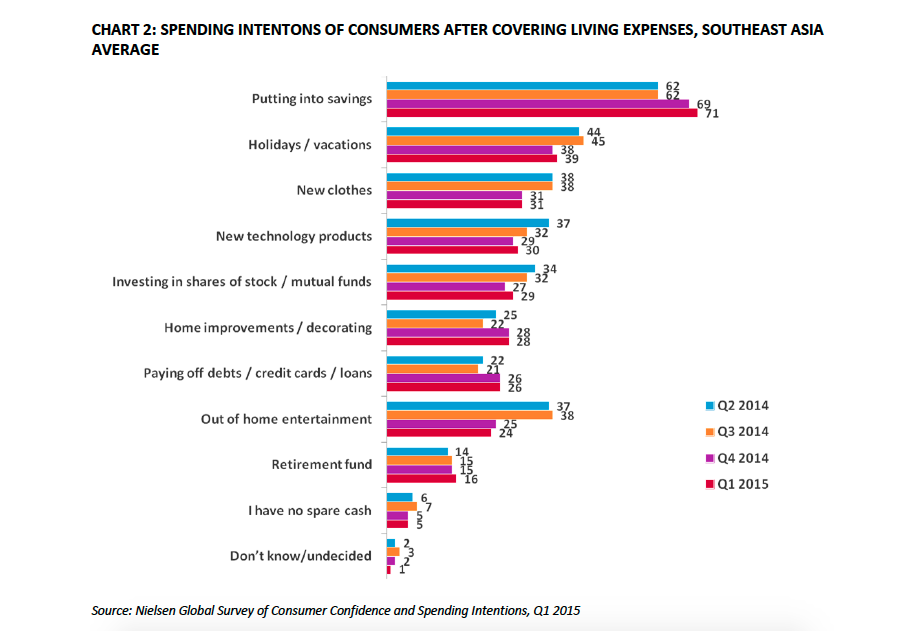 Outside of building their savings accounts, the most common item consumers purchase with their spare cash is holidays – close to two fifths of Southeast Asian consumers (39%) spend their spare cash on holidays, particularly Singaporeans (48%) and Thais (45%).

“Consumers in Southeast Asia remain diligent with their savings, but they are balancing out their nest egg contributions with spending on holidays and vacations,” Upadhyay said. Consequently, travel is a growing segment which represents ample opportunities, he added.