Staying true to its sustainability concept of "Be better, together - For the planet and the people", the Tokyo 2020 Olympic Games will feature bed frames made of cardboard at the Athletes Village. According to the Associated Press (AP), the frames are created by Japanese mattress company and Olympic sponsor Airweave Inc, and they will be recycled into paper products after the games, while the mattress components will be recycled into plastic products. The mattresses are not made of cardboard.

AP added that the concept behind this was to use materials which could be recycled after the Olympics and Paralympics. Quoting GM of the Athletes Village, Takashi Kitajima, AP said the bed came up as one of the ideas when the organising committee were brainstorming about recyclable items. It is reportedly the first time the beds and bedding in the Athletes Villages have been made of renewable materials.

Besides a cardboard bed frame, the games will also feature podiums made from recycled plastic waste collected from local households or the ocean. Last year, the organising committee said it is working with Japanese retail chain AEON and P&G to collect boxes of discarded plastic at over 2,000 retail outlets. The plastics will then be forwarded to P&G to manufacture podiums with the plastic and plastic waste collected from the ocean using its advanced recycle technology.

Graphic designer Goo Choki Par created a Paralympic poster featuring an abstract form of an individual moving forward.“The work pays homage to what each and every athlete has achieved, and to the history of human endeavour and progress,” he said. 12 posters are based on the Olympic theme and eight on Paralympics Games. 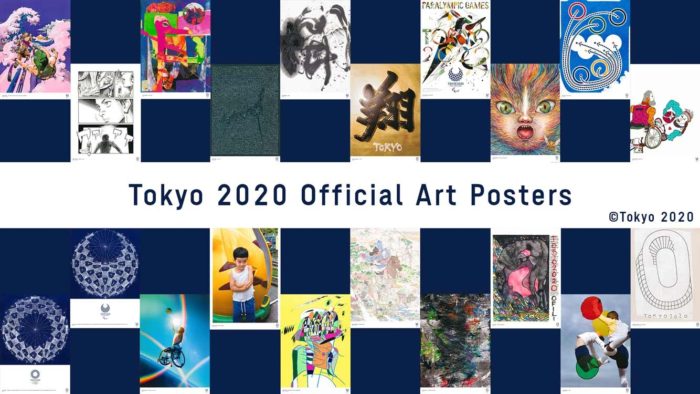 From 7 January to 16 February, the posters can be viewed at the Museum of Contemporary Art Tokyo which is one of the top museums in the country. It is hosted by Tokyo Metropolitan Government, the Tokyo Metropolitan Foundation for History and Culture and Tokyo 2020. The art posters will also be presented to the public across the capital to signal the fast approaching Tokyo 2020 Olympic and Paralympic Games and they will feature in the range of official licensed merchandise.