In January 2017, the Indonesian Ministry of Security made a surprising announcement. It was forming a special cyber agency to battle fake online and digital stories, such as false online claims, which spread like wildfire, of China waging biological warfare against the country using contaminated chilli seeds.

Quite frankly, I’m surprised it is a government leading the charge for a change, and not a commercial organisation. This development is actually an admission, at a national level, of how severe the situation really is.

While Singapore has yet to follow suit, though I suspect we are not too far from a similar situation.

The issue of using fake digital news (and content) to manipulate perceptions is not isolated to just a select few countries. Instead, it has become a global problem.

In the 2016 American presidential elections, Russia was suspected to have a significant role spreading fake news about Clinton. The Russian intent was allegedly to interfere with the election, swing votes, and aid Trump’s path to presidential victory.

According to Malaysian Communi­cations and Multimedia Commission (MCMC), Malaysia had to cope with online rumors involving MH370 as most can’t tell the difference between what’s real or fake. Even Singapore’s main press, The Straits Times, had their headline of an online article of President Tony Tan maliciously altered to read as follows: 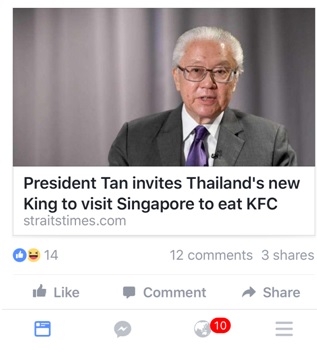 What is scary about spreading fake news online is that it requires no sophisticated technologies to do so.

The barrier to entry is actually much lower than learning to code or hacking. All that is required is a computing terminal, basic internet access, and a whole lot of human creativity.

Battling fake digital content is much like facing a black swan event or an alien invasion. We've never encountered such an enemy, nor are we faintly prepared to do so. Our traditional news channels, which we used to rely on for credible sources of information, are fast deteriorating as significant influence sources and simply can’t help us deal with this new challenge.

The future needs a new (and different) team of heroes to do unconventional battle.

Drawing from several sources of inspiration, especially those involving earthlings battling aliens and supernatural foes, we need to form a league of extraordinary persons. This force will call on the best to withstand malicious organizations that operate much like the villainous Hydra organisation, or whatever comes next.

I'm not going to list the names of persons I have in mind to form this league for Singapore, but bear in mind - they already exist!They are the best in their respective fields, and most are not publicly-known figures. When the need arises, they just need to be "recruited".

So to “protect and safeguard” their identity for now, I’ve just limited to simply describe their key roles instead:

The above will form the anchor members for this league. Do you also happen to know someone who sounds eerily familiar to the job descriptions listed above? Perhaps someone who is a good job fit to the descriptions shared?

Then I am just a short social media message away.

The writer is Ryan Lim, founder of QED Consulting.