Image-based social platform Pinterest has launched a “Try On” feature on its mobile app, allowing users to try on different lipstick shades through augmented reality (AR). Powered by Pinterest’s visual search function Lens, a “try on” button will also appear on select products, as well as in search with related terms such as “matte lipstick” or “red lips”.

Users will be able to browse through various shades from brands such as Estée Lauder, Sephora, bareMinerals, Neutrogena, and L’Oreal brands NYX Professional Makeup, YSL Beauté, Lancôme, and Urban Decay. 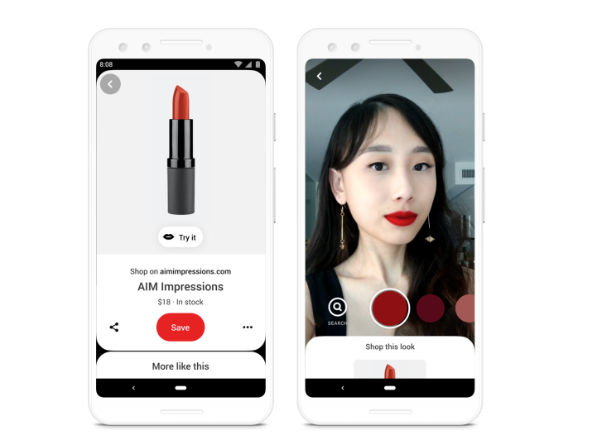 As users try on new lip shades, a “more like this” feature will include pins with related looks and allow users to try on a similar shade by clicking "see similar looks”. According to Pinterest, “Pinners” were keen on trying on new looks for happier purchases they will not want to return while mobile shopping. Pinners also requested to be able to explore looks without the anxiety that may come with trying something new at a store or buying a new product online they have not tried before.

In addition, the “Try On” feature has been integrated with the skin tone range feature on the platform to allow users to view similar lip shades on skin tones that match their own. According to Pinterest, the AR tech will not include any skin smoothing or image altering effects for users to avoid augmenting an individual’s skin tone. This comes as Pinterest looks to focus on building inclusive products for users on its platform.

The “Try On” feature for lipstick will be rolling out to Pinners in the US, with more AR categories to come. Marketing has reached out to Pinterest to find out if the feature will be available in its Asia counterparts.

Meanwhile, L’Oreal’s AI and AR company, ModiFace, recently tied up with Amazon to enable consumers to use the front-facing camera on their mobile phones to digitally try on different shades of lipstick in a live video of themselves or on a selfie. In a latest effort to revolutionise the retail and beauty scene, with this partnership, retailers will be able to incorporate virtual try-on experiences for an unlimited amount of products.

This comes a few months after it announced a virtual makeup try-on service #ColourMe for Watsons’ mobile apps in Malaysia, Singapore, Thailand and Taiwan. Done in partnership with A.S. Watson Group, #ColourMe enables shoppers to virtually try on 300 makeup products including lipsticks, mascara, eyeshadow, brow colouring, and foundation for its L’Oreal Paris and Maybelline brands. ASW said it will consider extending the collaboration to other brands and markets across its portfolio in Asia and Europe in the future.