Hong Kong’s retail sector continued to recover steadily in 2017. It is expected to improve further in 2018 on the back of a bullish economic outlook, both globally and in China, according to PwC.

Retail sales in Hong Kong for the first 11 months of 2017 increased 1.8% over the same period in 2016. Given the traditional shopping spree towards year-end, the full year increase could reach 3% year-on-year (HKSAR government retail sales figures will be released on 1 Feb).

Despite some store consolidation and a retreat from main street locations, luxury goods, especially jewellery and watches, was one of the best-performing sectors in 2017 and is expected to further recover in 2018, contributing to a further improvement in the overall retail sales in Hong Kong for this year and onwards. 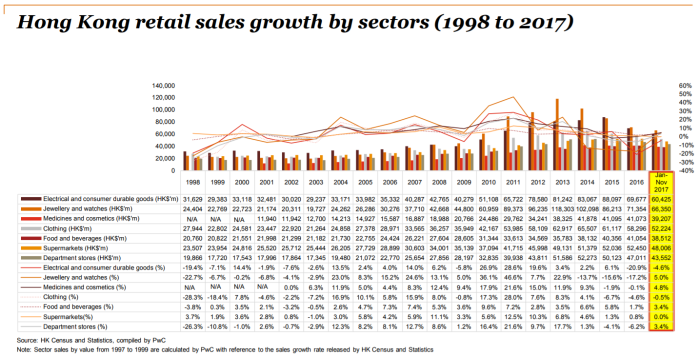 Hong Kong’s retail sector could enjoy growth between 4% to 6% in 2018, which is equivalent to approximately HK$465 to 480 billion, with a positive outlook for the next five years.

“In addition, tourist arrival numbers in Hong Kong, particularly from China, have been encouraging and recovering steadily in 2017 under the much better and stabler political and social environment. Combined with low jobless rate and a recent weakening US Dollar against major currencies, Hong Kong’s retail sector should be recovering well in the medium term and exceed the all-time high in 2013 within the next 5 years.”

However, the sector is still very much dependent on tourism – particularly from China. From January to November, Mainland Chinese tourist numbers increased 3.6% year-on-year, compared to 3.1% for all tourists.

The Chinese government recently slashed tariffs on 187 imported consumer goods, including wines and spirits, pharmaceuticals, and food. While PwC believes this policy will strengthen domestic consumption in China, it also argues that it will have only a modest effect on Hong Kong retail.

“This encourages legal imports and reduces the attractiveness of purchases made through irregular channels, thus bringing long-term benefits to both Hong Kong and the Mainland retail sectors, as well as to promote consumption upgrade in the Mainland.”

For Hong Kong and even global retailers to win over the longer term, they need to be a game changer within their industry.

To conclude, Cheng said, “Retailers need to transform themselves: from being disrupted to be a disruptor. Embracing technology and data in order to provide unique customer experiences through diversified platforms and logistics networks are the keys to success.”