Technology marketers are no strangers to disruption. Tried and tested methods are becoming harder and harder to pull off thanks to an increasingly discerning consumer base coupled with rapid advancements in technology platforms and systems.

For any tech company in 2019, navigating disruption is one of the keys to remaining relevant, creative and human in today’s age of automation, big data and technological advancements.

These issues were put front and centre at #Emerge2019, a forum that brought thought leadership and expertise to tech marketers in the region.

Arvinder Gujral (pictured), managing director of Southeast Asia at Twitter, set the stage with four key observations on the state of tech marketing. First, a convergence was happening between B2B and B2C audiences, which played to his second point; audiences need to be reached through their hearts (emotive cognition) and their minds (rational cognition), not one or the other. The other two observations Gujral shared were to focus more on usage rather than users, and to employ a feedback loop with hardcore users and early adopters, so that you can update your strategy to keep up with the pace of change. 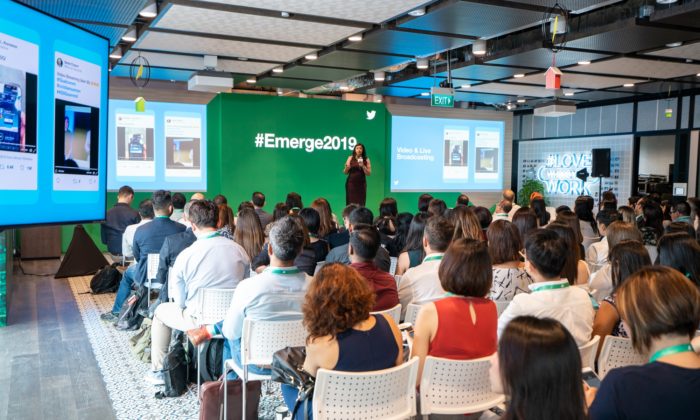 Maya Hari, vice president of Asia Pacific at Twitter, walked marketers through several trends and technologies that are already disrupting the industry, or likely will in the future. These trends include 5G, which has the potential to revolutionise storytelling and data-driven creativity by enabling immersive or augmented video formats and high quality live broadcasting; the next phase for Commerce, where e-tailers will compete to be even more seamless, and create experiences that are as memorable as those that can be found offline; and facial recognition, which could dramatically change the way consumers interact with a wide range of industries and services.

Hari outlined four main implications posed by these trends, two of which were that tech marketers need to place greater emphasis on brand strategy and trust. “Trust is the new oil. After GDPR, it’s no longer data.” She also said it was imperative for tech marketers to be data-driven and creative simultaneously, and learn how to not compromise on either. The last point Hari had for tech marketers was to build seamless experiences that delight customers in both the worlds they live in, online and offline

Making disruption work for you

In a conversation between Cheryl Goh, group vice president of marketing at Grab, and Sarah Personette, vice president, global client solutions at Twitter, Goh opened up about the challenges and milestones she overcame and achieved as one of the first members of the tech company, which now has more than 6000 employees worldwide. This included having to make very hard rebranding and business objective decisions early on in order to remain viable.

On the approach to breaking into new markets, Goh advised attendees to unlearn everything they know and experiment, even if that means breaking traditional rules of marketing. Citing Grab’s early days in Indonesia as an example, Goh said the team decided to use billboards as its primary medium to target specific regions where the service was available. Even though such a medium is traditionally not used to get a direct response, the team put up billboard advertisements with promotional codes for every expansion over one year.

She also warned that scalability is not always the most important feature. “Sometimes, you just need to do something that you know won’t scale, because it helps you understand the market much better,” said Goh. “When we were trying to attract Grab drivers in Singapore, it was a challenge reaching out to them as they are very busy and always in their cars. So, we went to Changi Airport where cabs were lined up, and we would talk to the drivers before they reached the front of the queue in under a minute. It’s not the most scalable way, but it helped.” 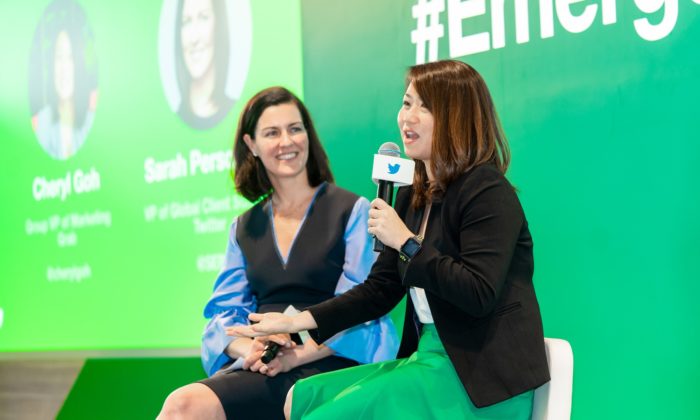 GrabTaxi rebranded to Grab in 2016, but not many people knew of the major disruption the company had to go through before that. Faced with competition from Uber, Grab was forced to challenge its deeply-entrenched belief that private cars would not take off in the region. To fully embrace the new norm company-wide and drive real change, Grab overhauled its organisational structure, and had someone lead cars as a standalone portfolio. “We needed the mindset of being ready to be disrupted. Change is never comfortable, but we are still around because we embraced it,” shared Goh. Today, Grab continues to disrupt itself through GrabPlatform, and is behind new offerings such as e-scooters and hotel bookings.

When asked what she thought of Grab’s story compared to other tech start-ups around the world, Personette remarked that one of the things they did well early on was brand building. “In many parts of the world, disruptors are so busy building their user base that they forget to build their brand at the same time. So at first they scale really quickly, but then hit a point where they have to go back and establish strong relationships with their customers in order to continue growing.”

Another area that Personette suggested marketers to look into is the “URL-to-IRL” (in real life) transition. “We have to push the dynamics across every single point where you use data and signals to make the online experience better, and then push it into real life to make touchable experience even better as well. We as marketers can continue to evolve in that space and I think we have only just begun to see what it is going to look like in the future,” she explained.

#Emerge2019 concluded with a panel of senior marketing leaders discussing everything including mapping the customer experience in 2019, trends and cross learnings from B2B and B2C marketing, technological changes that are impacting go-to-market strategies, staying authentic and relevant, and the role of genuine human connection, creativity and brand purpose amidst a constant backdrop of disruption. 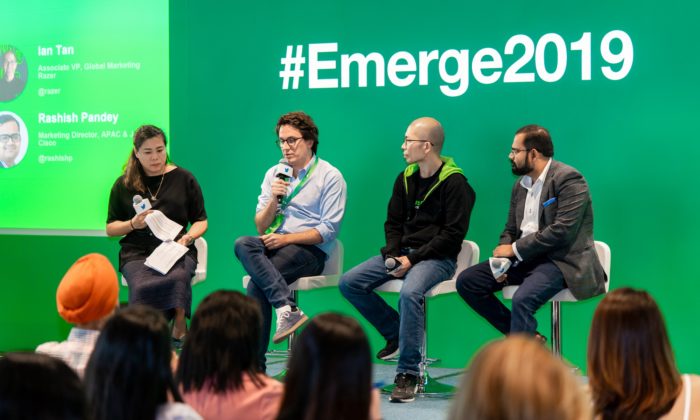 Rashish Pandey, director of marketing Asia Pacific and Japan at Cisco Systems, shared some of his challenges his team faced in rethinking their event strategy. “We knew we needed to transform our legacy functions to much more modern ones. For the events we choose to do, we transform event experiences and make them bigger and bolder. At the same time, we leverage digital platforms to drive webinars so we don’t miss a beat on engagement, results and pipeline,” he said.

On the same note of globalisation, Razer’s associate vice-president of global marketing Ian Tan added that localisation for each market is still necessary when reaching international audiences.

“If you want to go global, make sure you are very local in your executions, and that your core message and values are universal, and can resonate with anyone, anywhere.” On live-streaming, Jean Thomas, chief marketing officer at Lazada (Singapore) and Redmart, said the feature is a consumer-facing one that resonates with younger generations in Southeast Asia.

“It can tell stories so much better, and the engagement level is so much higher. It helps us connect people’s shopping experience with entertainment, and make it part of their journey,” Thomas said.

Pandey echoed Thomas’ sentiment on the power of storytelling, saying that tech marketers today have to change their storytelling and content to suit the market’s consumption habits. “If they don’t like your story, they tune out, as simple as that. That’s why creativity, data-driven or otherwise, is so important for us,” he said.