Surya Citra Media-owned Indonesian media streaming platform Vidio has reported a 225% growth in consumption amid the COVID-19 pandemic. According to a report titled "Southeast Asia Online Video Consumer Insights and Analytics: A Definitive Study by Media Partners Asia", total online video weekly streaming minutes on mobile grew 60% in aggregate across Indonesia, Malaysia, the Philippines and Singapore between 20 January to 11 April 2020.

The report also added that with the disruption and subsequent lockdown measures enforced during the COVID-19 pandemic, total online video streaming weekly consumption reached 58 billion minutes on mobile by 11 April, as opposed to 36.4 billion on 20 January 2020.

In Indonesia, Vidio dominated across freemium segments, while iWant and meWatch were top players in Philippines and Singapore respectively. iWant saw a 30% jump, while Mediacorp-owned meWatch secured a 97% increase in online video consumption.

Meanwhile, in Thailand, Line TV saw a 107% jump. Mobile video platforms such as AISPlay and TrueID also continued to grow consumption in Thailand. In addition, China's leading online video platform iQiyi has also begun to gain traction in Southeast Asia. The video streaming platform launched in Southeast Asia starting of the year, and has reported over 500% uptick in consumption across Indonesia, Philippines, Singapore and Thailand.

According to the chart below, another regional player Viu was also reaping the benefits of increase in online streaming. Viu has seen a 274% increase amid the COVID-19 period. Malaysian subscription video on demand service iflix too has recorded a 118% growth in consumption.

Among the local and regional players, global streaming platform Netflix was also listed as one of the top streaming platforms. Netflix has seen a 115% jump across Indonesia, the Philippines, Singapore and Thailand.

Marketing Interactive's Content 360 conference is going virtual, and will bring together industry leaders to discuss challenges and share insights on future content marketing trends, as well as successful strategies to help tackle the complex marketing landscape. Sign up here! 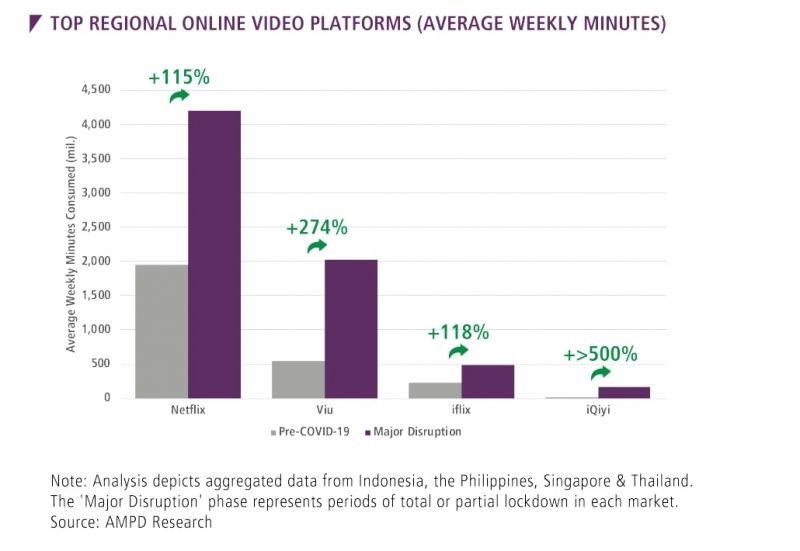 MPA executive director Vivek Couto said the penetration of streaming video is expected to increase during this pandemic as millions have been forced to operate from home. He added that the focus now for streaming platforms is to successfully retain newly acquired customers in the second half of 2020.

In addition, he explained that advertisement-based video-on-demand platforms should also explore ways to capitalise on the expanded reach. Through the study, the analysis indicated that the four markets (Indonesia, Malaysia, the Philippines and Singapore) had a combined seven million paying online video or OTT customers at end-March 2020, accounting for US$350 million in annual consumer spend.

“Key local players should be encouraged by increasing consumption and in certain cases, monetisation, in the surveyed markets as they look to invest in scaling their offerings and managing the transition from broadcast to digital video. The onus is now on more robust aggregator offerings from traditional pay-TV platforms and new mobile and virtual operators,” Couto said.

This comes following a Nielsen study that revealed a new digital norm has emerged in Indonesia. Indonesians were shifting from offline to online, and will continue to do so even after the pandemic. The report added that online entertainment activities have also become more popular. About 40% were tuning into online video streaming, followed by 27% playing more online games and another 27% keeping engaged via radio programs or music streaming platforms.

This is evident not just in Indonesia but several parts of the world. Recently, Netflix resolved to reduced streaming quality in Europe and in Malaysia by about 25% to ensure the system does not collapse, while still allowing users to access and watch content on its platform amid the increase in streaming.