As far as YouTube celebrities go, Casey Neistat had it made.

Since starting his daily vlog in March 2015, Casey amassed a massive follower base of 5.9 million subscribers and received more than one billion views on his videos. He’s one of the platforms most successful content creators and his profile seemed to be on a perpetual rise.

But he did something pretty extraordinary. He decided to walk away from it all – his vlog, his community and the money.

Why? Because he'd made it. He'd achieved success and was afraid of creatively going stale.

"I think the typical lifespan of most YouTubers is that they find a degree of success, and once they find that success, they stop innovating creatively because there's a fear that if you change what you're doing, the audience is going to stop watching," he said.

According to Casey, success on the platform had become too easy and he wanted a new challenge.

To many in his community, it was a strange, perhaps even crazy, move. He’d found the secret sauce that so many content creators chase and he just walked away from it at the top of his game.

But, is that really the full story?

The fact that he alluded to achieving all he could in terms of success on the platform perhaps highlights another reason why he stopped vlogging.

A couple of days after Casey announced that he was ending the vlog, news broke that CNN had just purchased his app company, Beme, for US$25 million dollars. Word has it that CNN didn't buy the app for the tech (indeed, they are folding the company); they bought it for the content creation talent – aka Casey and his team.

Coincidence? Or is quitting the vlog related to the Beme acquisition? It’s likely the two are linked. It’s possible that the vlog was a well thought out content marketing strategy to increase the value of the Beme brand – priming it for acquisition.

I'll admit that evidence is light on the ground to support this theory. There’s no doubt, however, that Casey’s excellent YouTube content played a role in growing the appeal of his brand and profile, making an acquisition of Beme more likely.

Casey's story is a great example of how treating content like a product can create new revenue streams.

Casey is one of the few YouTubers that chased more than 'subscribers' and revenue on the platform. Perhaps his goal was to use those subscribers to build a better brand and to sell an asset. His execution essentially followed the content marketing funnel (below), including the following three steps: 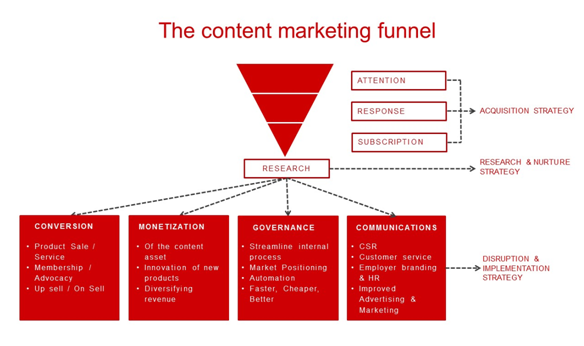 From the beginning, Casey created content that had not been seen on the platform before. In essence, his vlogs are the epitome of the 10x content that content marketers so ritually preach. 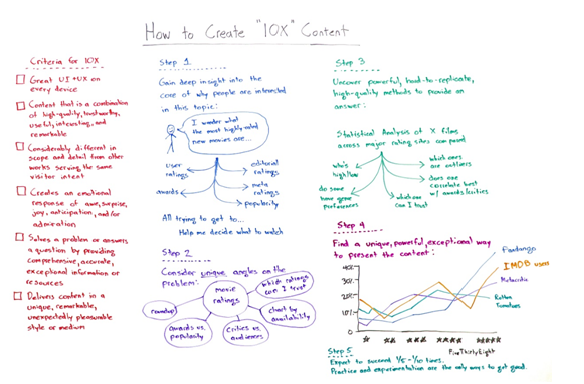 His videos attracted an audience because they did three things really well:

Quality. His vlog posts were of an insanely high quality, unmatched by any other YouTuber on the platform. The editing was brilliant, the music perfectly suited, the content uplifting and entertaining. This made his vlogs more valuable than anybody else's content.

Passion. Casey had a reputation for working harder and longer than any other YouTuber. His passion for the medium is what drove him to not let the cadence or quality dip. This meant that every time you clicked on his videos, you could be sure that you were about to watch something special.

Unique. Everything from his sunglasses, to his hair, his drones and Boosted Boards were uniquely Casey. Likewise, his editing was unique, his photography was unique, his story was unique. He had carved out a unique place for himself that could not be replicated by any other competitor.

In the past Casey has said, "what this vlog is for me is a way for me to share my ideas and perspectives... it's a forum for me. It's not a journal."

He makes it pretty clear that the goal for the vlog was never meant to document his life. However, along with being a creative outlet, the vlog was also able to act as a tool to research an audience for future projects. A stepping stone towards greater things.

When we look at his content through this lens, we can see that Casey used it to test different ideas and products to see what sticks. He wasn't afraid to create controversial content that his subscribers wouldn't like because he wasn't chasing 'likes'. His content had a higher purpose.

A famous example of this was around the US presidential election when he openly declared that he was voting for Hillary Clinton at the risk of alienating a large chunk of his subscriber audience. He called other YouTubers to do the same, but few had the courage to follow suit.

Such videos highlight Casey's priorities. He viewed his subscribers as commodity for research. He was not afraid to lose subscribers (aka ad revenue) because he knew that the insight he would get from such videos would allow him to create better content and more opportunities.

Casey managed to monetise his content in three core ways (though there were likely many others).

While most content creators like Casey are monetising their content creation with advertising, I see few brands doing this on the platform. If you are creating 10x content, you should be monetising it. Doing so creates a reliable revenue stream which you can use to invest in creating better content or branching out into other marketing avenues.

It’s been estimated that Casey’s videos made him nearly $130,000 a month off the pre-roll ad revenue. That's more than the annual marketing budget for a lot of brands. If your content brings in a tenth of that revenue a month, the possibilities of what a brand could do is exciting.

Casey was no doubt in hot demand and would probably have earned a tidy income from appearances and keynote speaking. Likewise, Boosted Boards and others would have paid Casey handsomely to feature their products in his videos. Here he is with his owned ‘influencer' page on the Boosted Boards website:

Brands with an established content asset will be an attractive platform for like-minded personalities and brands. There is no shame in creating bespoke native content partnerships and charging for it. Just make sure you’re upfront with your audience that the content is sponsored.

It looks like the sale of Beme for US$25 million was an end game goal for Casey and spelled the end of the vlog's usefulness.

While he doesn't explicitly say so in his videos, Casey likely saw the potential of building an audience on YouTube to create buzz around himself and his business projects.

Selling Beme off the back of his YouTube success was a golden opportunity. Indeed, when asked about the vlog, Casey said, "I think of it as an orange—you squeeze that opportunity until there's no juice left".

The sale of Beme was that last big opportunity; once that happened the vlog had served its commercial purpose and no longer needed to be a focus. It had made Casey the money he needed for his next creative project.

Perhaps one of the most important lessons from this case study is that Casey's value and the value of his products rose with the rate of his content subscribers.

Having such foresight is usually not a prerequisite for most marketing campaigns. But content marketing is different. If you are going to create content, you need to consider the possibility that you are building an asset that could one day be acquired for a large sum. US$25 million for a social media app is not chump change and would likely not have been possible without the success of Casey's daily vlog content and audience on YouTube.

Casey's story is a great example of the potentially high rates of return from content marketing when you set a long-term goal and see it through. Returns that high are simply not possible with any other form of marketing.

TL/DR – Some key takeaways from this case study:

The writer is Daniel Hochuli, head of strategy in Asia at King Content.