The consumer-brand relationship no longer depends solely on the brand appealing to consumers’ values. In fact, consumers are now expecting brands to take a stand on issues close to their hearts.

This might be a tricky situation for brands who are hesitant about getting involved in any social or political issues for fear of backlash, and those that have been unwillingly dragged into a political conversation.

According to the 2017 Edelman Earned Brand Study, 50% of consumers worldwide consider themselves to be belief-driven buyers and expect a brand to speak out on an issue they care about, such as immigration and gender equality. Brands are also expected to take a stand on issues that are authentic to them, by addressing how they affect aspects such as customers, employees and the brand’s core values.

More than half of the 14,000 individuals surveyed (57%) across 14 countries including Singapore, China, Japan and the US, will purchase or boycott a brand solely because of its position on a social or political issue. The study also indicated that 30% of consumers made belief-driven purchase decisions more than they did three years back.

More than two-thirds (67%) of consumers surveyed purchased a brand for the first time because they agreed with its position on a controversial topic, while 65% refuse to buy a brand when it remains silent on an issue it is obliged to address. If a brand speaks out on an issue and shares a similar stance as belief-driven buyers, it will gain brand loyalty among 51% of those surveyed, and 48% will advocate for and defend the brand as well as criticise its competitors.

These numbers show that consumers increasingly expect brands to help solve societal problems, which is something companies should note in order to gain new customers and build stronger consumer relationships quickly. 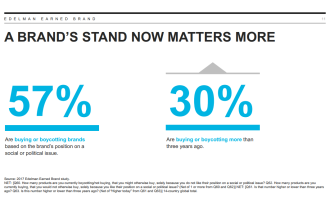 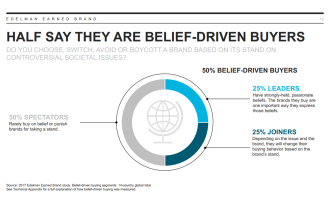 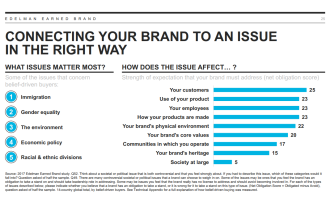 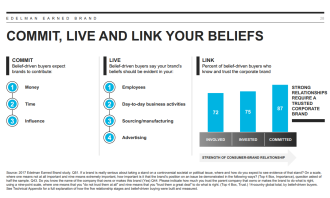 “Belief-driven consumers will leave behind those that fail to take a stand on issues they care about, but they will reward those that align with their views through increased spending and advocacy,” Richard Edelman, president and CEO of Edelman, said.

“This means there is a real possibility of consumer commitment well beyond the classic purchase funnel, because active partnership with a brand gets customers invested as advocates and loyalists,” he added.

The study also showed that consumers view peer-driven conversations (89%) as more credible than statements by celebrity spokespeople (69%). They also depend on conversations with family and friends (31%) more than advertising (21%) to learn about the actions that brands take.

Additionally, belief-driven buyers expect a brand to commit time (72%), money (70%) and influence (68%) to the cause it stands for. Companies are to also express their beliefs in diverse ways, with employees being the most important channel and advertising being the least.

Brands that fail to answer the call of belief-driven consumers risk ending up in “No Brand’s Land”.

“To win with these valuable customers, brands must fundamentally rethink their strategies and move beyond simply co-opting culture or stating their position to finding a true calling and acting on it. Brands that live their beliefs in all that they do, and invite consumers to take action with them, will be rewarded with more conversation, more conversion, and ultimately, more commitment,” Renshaw added.

Central to the study is the Edelman Brand Relationship Index, which annually measures the overall strength of the consumer-brand relationship. There are four different stages in the brand relationship index – Indifferent, Interested, Involved, Invested and Committed.

The global index for belief-driven buyers is 46 out of 100, placing them in the Invested stage. According to the study, this shows that buyers are already deeply connected to brands that support their causes, and are more willing to buy first, remain loyal to, advocate for and defend a brand, as compared to the average customer.

Majority of the belief-driven buyers are Millennials (60%), and they are most active in developing countries such as China (73%) and India (65).

Qoo10 works with brands to crack down on counterfeit products

Under Qoo10's Brand Protection Programme, businesses and brands can work with the platform to remove infringing listings...

The programme is organised by Brand New Media, and is supported by the Infocomm Media Development Authority, Singapore Press Holdi..

EDB on the hunt for social media agency

The appointment is for a year with the option to extend for another...

This comes days after Gardens by the Bay appointed a media agency. ..

HERA is also known for its brand ambassadorship with Hallyu star Jun Ji Hyun, who caused several HERA lipsticks to sell out after ..