Durex Singapore and Coffee Meets Bagel (CMB) have partnered to shed light on the topics of sex and dating. In a video that is nearly three minutes long, both teams got six singles to share their views on who should initiate the topic of sex, how many dates one should go on before bringing up sex, and tips for bringing up sex. The singles also shared ways to make the dating scene in Singapore better.

CMB is said to have begun work on this campaign in May as MARKETING-INTERACTIVE received a notification on the app asking users if they wanted to star in a CMB campaign. “We are working on an exciting campaign for CMB Daters in Singapore – and you could be part of it! Tell us about you and we’ll reach out if you’re the right fit,” the notification said. 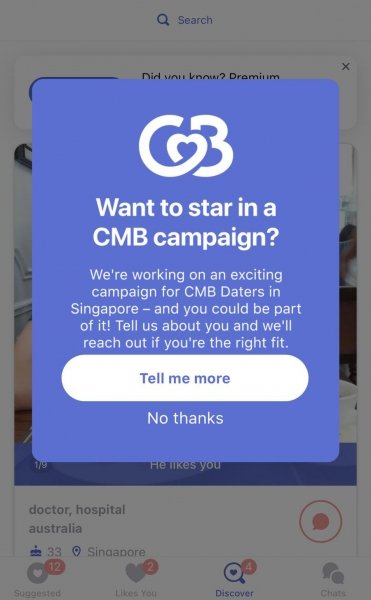 Justin Lee, marketing director at Durex’s parent company, Reckitt, told MARKETING-INTERACTIVE that it chose to work with CMB as both brands are fully aware of the complexities surrounding navigating the topic of sex during dating. He added that both brands are “committed to equipping Singaporean daters with the confidence and tools they need to talk about sex without feeling uncomfortable and initimidated”.

According to him, the campaign’s objective to normalise conversations around safe sex among Singaporeans was in line with Durex’s global initiative of “Let’s not go back to normal”, launched during May last year. Lee said that the campaign aims to equip Singaporeans with the necessary tools to navigate tricky situations and have authentic conversations about sex when dating, instead of assuming each others’ intentions which was the “old normal”.

Lee added that the initiative is currently being executed locally, but hopes that the key message of the campaign, normalising conversations around sex, will resonate well with the regional audience.

According to research by Durex and Coffee Meets Bagel which surveyed 1,123 Singaporean daters, 54% of them think it is important to talk about sex with their dates and only 23% bring up the bedroom conversation. Despite the majority of daters being keen to find out what sex means to their date (63%) and their views on the appropriate timing for sex (59%), the research found that the taboo nature of the topic is silencing some important conversations around intimacy, safe sex and connection.

The research also found that 40% of Singaporean daters are simply too uncomfortable broaching the subject of sex, with the top three reasons being not wanting to seem promiscuous (51%), being unsure of how to approach the subject since they have never talked about it (39%), and viewing it as too embarrassing (38%).

At the same time, there is also a “stark gender divide” in how men and women perceive sex and what they want from conversations around the topic. When asked what daters were interested in learning more about, men expressed interest in finding out how to bring up the topic of sex, while women wanted to discuss setting boundaries.

Women were also more focused on health and safe sex, with more women interested in knowing their dates’ STD history and latest test date (59% versus 34%) and their dates’ view on contraception (49% vs 33%) as compared to men. Wearing a condom during sex was also hugely important for more women than men, with 70% of women ranking it “very important” as compared to 36% of men.

Lee said it is clear that men and women have very different expectations. “But just because it is the norm in Singapore to shy away from talking about sex, doesn’t mean we should continue doing it. Instead, let’s aim for honest, authentic conversations about sex, especially when dating, so both partners get on the same page, and nurture intimacy, safe sex and connection,” he added. Lee also hopes that its partnership with CMB will prompt Singaporeans to start taking the right action.

Meanwhile, CMB’s co-founder and chief dating officer, Dawoon Kang, said it is so easy to assume both individuals are seeking the same thing when it comes to sex and intimacy, but this often leads to confusion and hurt. While talking about sex can be daunting, Kang said if individuals can learn to talk openly about sex with their dates, they can talk through just about anything. Separately, Durex is currently working with AKA Asia for PR and social media duties in Singapore.

Separately, Durex is unapologetically bold and witty when it comes to marketing and trendjacking. Recently, it pushed out a post celebrating SAF Day featuring the phrase "Weapon loaded, ready, safe". It also urged consumers to tag their favourite soldier to thank them. It has also launched condoms in local flavours ahead of April Fool's and unveiled a new font titled "One Night Sans" as part of a wider brand repositioning that aims to challenge sexual norms and “sexpectations”.

In the meantime, its parent company, Reckitt, underwent a rebranding in March this year from its previous name Reckitt Benckiser. Done in partnership with Havas' branding agency Conran Design Group, the rebranding also comprised a new logo and colour palette, bespoke typography and photography.