The delayed launch of the BTS meal in Singapore has been making headlines and is clearly a meal many fans have long been waiting to get their hands on.  A quick search by MARKETING-INTERACTIVE found that various items from the BTS meal are currently being sold on Carousell, with listed items including the BTS meal packaging, the sauces that came with the meal, and the entire meal itself. The prices for the items ranged from SG$6 to SG$100,000.

A spokesperson from McDonald's Singapore told MARKETING-INTERACTIVE that the fast food joint does not encourage customers to purchase the BTS meal for resale.

"Our intention is for the BTS Meal to be enjoyed by as many customers as possible," the spokesperson added.

A spokesperson from Carousell also spoke to MARKETING-INTERACTIVE with regards to the issue. "While we are an open marketplace and understand the appeal of reselling exclusive merchandise, we do not encourage scalping or profiteering," the spokesperson said. Pre-empting such a situation, Carousell also warned its users last month asking them not to overprice their listings.

After the launch, Carousell also shared another post on its Instagram page to reiterate its stance, with the caption reading "Don't sell so ex pls... let’s be fair to all fellow ARMYs". 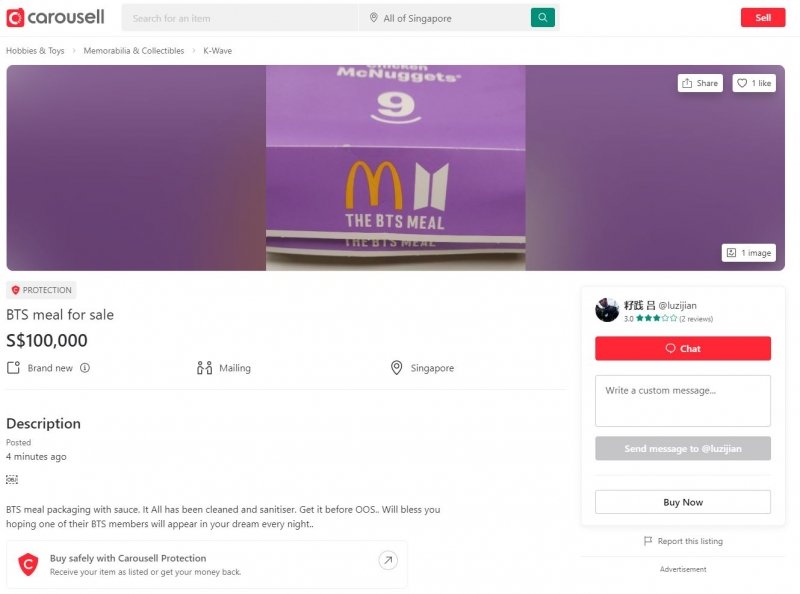 Meanwhile, McDonald's Singapore recently distributed 2,000 BTS Meals to Changi Airport employees yesterday, as a gesture of appreciation to the frontline employees working in Zone 1 of the airport, which is deemed the highest-risk zone according to its press release. The BTS Meal launched in Singapore on 21 June as part of its one-of-a-kind menu “tour” in collaboration with 21st century global pop icons, BTS. Its initial launch date on 27 May this year was postponed in view of Phase 2 (‘Heightened Alert’) in Singapore in May.

The 2000 BTS meals were prepared in McDonald’s restaurant at Changi Airport Terminal 3 and were delivered to the employees with safety measures in food delivery being observed.

“We would like to spare a thought for our Changi Airport community who have displayed admirable grit and dedication in keeping the airport running 24/7 in this current climate. We salute these everyday heroes and understand it has not been easy for them," Benjamin Boh, general manager, McDonald’s Singapore, said. Boh added that the delivery of the meals was done to spread cheer and encouragement and for the frontliners to enjoy a meal on them.

Albert Lim, senior vice president of airport operations management, Changi Airport Group, said: “We would like to extend our heartfelt thanks to McDonald’s for its support and care for the airport community." Lim also added that they were encouraged by the spirit of togetherness and unity that was displayed.

Moreover, the BTS collaboration with McDonald's has moved beyond just a meal to merchandise line, with its Melting Collection and Saucy Collection. The first collection flows in line with BTS' latest single "Butter" while the latter includes hand-painted artwork created by BTS members imprinted on the merchandise. Both collections are available on the Weverse Shop, an official eCommerce platform for fans around the world of various artistes.

Recently, McDonald's Indonesia also made the news for a frenzy caused by the launch of the BTS meal. According to a statement on its website, the Jakarta Metro Police had asked McDonald's Indonesia earlier this month to discontinue its BTS Meal after 32 outlets were found to have violated health protocols.

According to multiple media reports including Reuters, New York Times and BBC, the limited-edition meal by the K-pop group resulted in a buying frenzy among fans. Images online showed numerous delivery riders gathering outside McDonald's outlets, sparking concerns about COVID-19 clusters in the country. The one-of-a-kind menu "tour" hit the shores of Indonesia on 26 May, following the announcement of McDonald's partnership with BTS in April.