Dentsu is restructuring its business and reducing its headcount by about 11% in seven markets - Singapore (including regional headquarters), Australia, Brazil, China, France, Germany and the UK (including the global headquarters of the international business). This represents a reduction of 3% of the total headcount of the international business, as well as property rationalisation and other related impacts. Meanwhile, Dentsu said its Japan business "has been in line with its expectations".

It is also structuring its international business into three lines - creative, CRM, and media. Dentsu said these lines of business have been designed around client needs and will ensure it is set up to help clients win, keep and grow their best customers by being data-driven, tech-enabled and idea-led.

"This will accelerate our ability to deliver integrated solutions to our clients and ensure our services are easier to navigate and set up for success in the mid-long term," Dentsu said in the statement. Dentsu added the restructuring will "accelerate the implementation of the new business model and deliver improvements and efficiencies for its business and its clients". 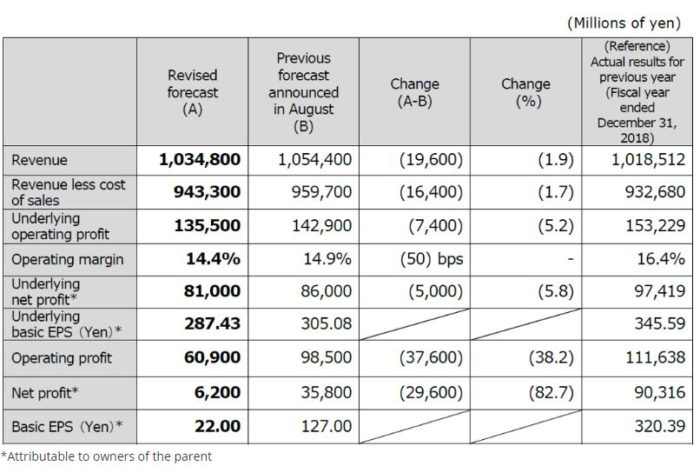 Total restructuring costs is estimated to be about US$238 million. Dentsu added that more than US$133 million of headcount-related costs are expected to be saved on an annual basis. This comes as "a small number of large, complex and challenged markets" within Dentsu's international business have reported ongoing under performance over recent quarters. According to Dentsu, this trend has continued into the fourth quarter, resulting in a downward revision of its full-year performance expectations. Dentsu also slashed its latest forecast of financial results for the financial year ending 31 December 2019. It now expects a profit of US$57 million compared with its previous forecast of US$327 million.

Separately, in a statement to Marketing,  Dentsu Aegis Network said it is closing its global data innovation centre (GDIC), which was first launched in Singapore in 2016 and supported by the EDB at the end of the year.  The spokesperson added that  the products of the global data innovation centre "have been transferred to several markets" for continuation in their respective markets or regions. The GDIC was responsible for developing and producing innovative applications, and serving as a hub for data scientists and technology talent for the entire network globally.

Dentsu Aegis Network told Marketing that it is deeply appreciative of its collaboration with EDB and will continue to focus its efforts and investment in areas of high growth. She added that the network has had "several successful projects" out of its two Centres of Excellence (CoEs) and the projects have since concluded in accordance with the tenure of the grants.  Its CoEs focused on real-time media analytics and creative technology innovation in an effort to service growing demand for sophisticated marketing capabilities, and to capture the emerging opportunities in Asia.

Dentsu has seen many notable departures in recent times. Just today, news broke that Dentsu Asia Pacific’s chief creative officer, Ted Lim, would be leaving the network after seven years. Lim joined Dentsu in 2013 to lead its creative offering across Southeast Asia, and subsequently took on an expanded remit for Asia Pacific outside of Japan. DAN’s spokesperson told Marketing that there is no immediate replacement for Lim’s role.

Last month, Dick van Motman, left his role as Dentsu Aegis Network’s (DAN) global CEO, creative and content to become an advisor to executive chairman and CEO Tim Andree. Jean Lin, DAN’s global CEO, customer experience and commerce, took over the role. Van Motman will aid with the transition in the meantime before leaving DAN at the end of the year. According to DAN, van Motman’s tenure has seen hallmark acquisitions as well as the hiring of strategic talent that helped the agency group to diversify and accelerate business growth.