Coca-Cola and Campbell Soup Company have made a move into the non-fungible token (NFT) scene, joining brands such as Budweiser, Dole, P&G and Warner Bros, among others. Ahead of International Friendship Day on 30 July, Coca-Cola is auctioning a set of four collectible NFTs. The "Friendship Box" was inspired by video-game loot boxes, playing on the popular video game feature involving sealed mystery “boxes”.

The collection comprises some of Coca-Cola’s reimagined iconic assets, with each NFT inspired by shared moments of friendship. According to Coca-Cola, the digital collectibles were created in partnership with developer Tafi, creator of custom 3D content for avatar and emoji systems, with the initial concept developed by Vice Media's VIRTUE. The four pieces are namely the Friendship Box itself, which takes the form of a 1956 vintage vending machine, a custom Coca-Cola bubble jacket wearable which is a subtle nod to Coke's delivery uniforms, the reimagined 1940 friendship trading cards, as well as a sound visualiser which captures the sound of opening a coca-cola. Taking reference from loot boxes, there will also be hidden surprises that would only be revealed when the Friendship Box is digitally opened by the winning bidder. The auction will be held on NFT marketplace OpenSea. All the proceeds from the auction will be donated to Special Olympics International, which has partnered with Coca-Cola for 53 years.

Selman Careaga, president, global Coca-Cola Trademark, said that Coca-Cola has "shared its rich heritage with consumers through simple moments of joy for decades,” adding that it is excited to share its first NFTs with the metaverse, where new friendships are being forged in new ways in new worlds, as well as to support Special Olympics International. "Each NFT was created to celebrate elements that are core to the Coca-Cola brand, reinterpreted for a virtual world in new and exciting ways,” said Careaga.

Meanwhile, Campbell recently celebrated its a design refresh with an NFT collection titled  “AmeriCANa — SOPHIA CHANG X CAMPBELL’S”. comprising 100 Campbell’s authenticated NFT art pieces. The food company collaborated with street-style artist and illustrator Sophia Chang, whose multimedia artwork “puts a twist on classic American art styles through her unique visual storytelling”, said the press release. The company also added that this was to “build on its legacy of inspiring artists”. 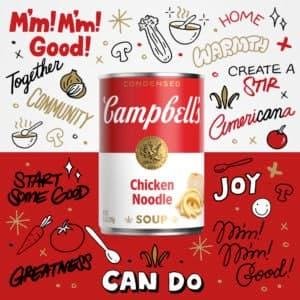 Campbell will be donating all proceeds for the Campbell NFTs to Feeding America, a long-standing partner with Campbell in fighting food insecurity. This NFT is also a “tribute to Campbell’s continued evolution shown through the iconic designs it has produced throughout the years”. Additionally, as part of Campbell’s commitment to sustainability, the brand said it will work with NTWRK and Aerial to offset the carbon footprint of the NFT.

The brand refreshed its iconic red and white design and the new design features several new elements to contemporise the brand while respecting its heritage. This included a modernised logo scripture based on founder Joseph Campbell’s original signature. According to Campbell, the refreshed label still evokes the same sense of comfort, goodness and Americana. To build on its legacy of inspiring artists, Campbell’s partnered with Sophia Chang whose multimedia artwork puts a twist on classic American art styles through her unique visual storytelling.

Campbell explained that Chang’s storytelling approach to her art and passion to empower communities is woven into her interpretation of the beloved nostalgia of the famed can while creating space for a modern interpretation of the brand today. This NFT is a tribute to Campbell’s continued evolution shown through the iconic designs it has produced throughout the years.

Linda Lee, CMO, meals and beverages, Campbell Soup Company, said that Chang was a “natural choice given her street art sensibility and her love of the Campbell’s brand and its connection to the art world”. Lee also added that the company has been on a journey to reimagine its iconic brand and appeal to new generations of consumers who are cooking at home more than ever, while still honoring its rich history. “The commissioning of our first-ever NFT art piece pays tribute to our place in art and pop culture, while celebrating in the most modern art medium to date,” said Lee.

(Read also: Analysis: What exactly are NFTs and why it's relevant to marketing)

Meanwhile, president of eCommerce platform Shopify, Harley Finkelstein, announced on Twitter recently that it was making it easier for merchants to sell NFTs directly through their store.

“Before Shopify offered this capability, merchants would have to sell through a third-party marketplace, also known as less control of the sale and customer relationship. Once again we are putting the power back into the hands of merchants and meeting customers how and where they want to buy,” wrote Finkelstein. The first client to come on board was the basketball team, Chicago Bulls, which has launched its officially licensed NFT collection titled “Bulls Legacy Collection”.

The Chicago Bulls' new collection will feature six unique token designs in three distinct tiers of rarity and will be available to purchase from 26 July to 31 July, said the Bulls on its website. ​​Minted on blockchain in limited supply, collectors will also get the opportunity to turn their collection into one-of-a kind experiences and other prizes. Fans may also have the opportunity to purchase an NFT beginning with the 1991 Championship Ring.  Each NFT purchase will result in receiving a random serial number and rarity level that won’t be revealed until the NFT is opened. According to the basketball team's website, there will be limited tokens minted for each championship year – 91 for the 1991 title, 92 for the 1992 title, and so on.

Chicago Bulls joins the league of sports teams with NFT tokens, with the most recent being Arsenal FC $AFC Fan Token on sports and entertainment industry blockchain provider Chiliz’s Socios.com mobile app. Socios.com will become a digital meeting place for Arsenal’s international fanbase, along with other notable sports entities on the platform such as UFC, Barcelona, Valencia CF, Paris Saint-Germain, Aston Martin Cognizant, and Roush Fenway, among others.