NFTs, also known as non-fungible tokens, have gained traction online recently after it grabbed the attention of Twitter CEO Jack Dorsey and American rock band Kings of Leon. Dorsey, for instance, tweeted a link to a platform named Valuables, putting his 21 March 2006 tweet up for bid. According to the website, CEO of Bridge Oracle, Sina Estavi was the highest bidder, placing an offer of US$2.9 million for Dorsey's first tweet: "just setting up my twttr". Dorsey said proceeds from the sale will go to Give Direct to fund COVID-19 relief.

On the entertainment front, American rock band Kings of Leon sold its album package comprising a vinyl and digital download in the form of an NFT priced at US$50. According to CNBC, the album was only available for two weeks and thereafter, no more albums will be made.

NFTs have also taken the sporting world by storm and the National Basketball Association (NBA), for example, tied up with Canadian-based Dapper Labs to create a virtual trading card marketplace. Each collectible is associated to a blockchain and can be bought as an NFT, CNBC said. As of now, a highlight of Los Angeles Lakers player LeBron James dunking has sold for over US$200,000 via NBA Top Shot, while an autographed NBA rookie trading card by Dallas Mavericks player, Luka Doncic, was sold for US$4.6 million, the article reported.

What exactly is an NFT?

According to the Wall Street Journal which quoted research by NonFungible.com and L’Atelier, the first NFTs surfaced in late 2017. There are several more examples of NFTs coming to play, such as the Nyan Cat meme creator selling an NFT for an equivalent of close to US$600,000 in February; artist Mike Winkelmann, also known as Beeple, selling a digital image at British auction house Christie's for US$69.3 million; and TikTok skater Nathan Apodaca selling a viral video of his as an NFT for at least US$500,000. But what exactly is an NFT?

A fungible asset is something with units that can be readily interchanged, such as money, CEO of Aqilliz Gowthaman Ragothaman said. For example, two US$5 notes carry the same value as one US$10. A non-fungible asset, however, is neither replaceable nor divisible, he said.

While NFTs can be traded just like any other asset class, every single token is unique, rare, and indivisible.

By minting these assets on the blockchain, Ragothaman explained that individuals also have assurances of its provenance with a clear, transparent record of all past owners of the asset and what the terms of ownership entail as determined by the author of the NFT itself. "The tokens are a unique identification code, built on the blockchain and cannot be duplicated or copied; hence can be used as an authentic proof of ownership of the assets," he added.

Meanwhile, Ramakrishnan C.N., partner at Entropia Group and head of Entropia Extended Reality, said the mutual agreement and the expert validated authenticity is what NFT provides for in the virtual world. Citing an example of Leonardo da Vinci's Mona Lisa painting at the Louvre, Ramakrishnan said if the Italian painter were to create a digital Mona Lisa on an iPad today, it could be easily copied without anybody knowing which one is the original. However, with NFT associated with the original artwork, there would only be one clear owner of the original at a time.

"The title can be sold or bought, just like an actual physical painting. The ownership chain is also visible to everyone on the network, and the value of NFT may change depending on who previously owned it," Ramakrishnan explained.

How is NFT relevant to marketing and advertising?

While NFTs have gained popularity in the entertainment, arts and sports scene, the digital currency can also be beneficial to the marketing and advertising industry. In the case of loyalty programmes, Aqilliz's Ragothaman said NFTs could be encoded with insights informed by CRM data - be it age, demographics, spending habits, and other traits that share insights into a consumer’s preferences. NFTs can be personalised by encoding relevant features such as free gifts and vouchers or even access to a VIP programme tailored to the specific individual.

"This gives brands the opportunity to enrich the brand-customer experience, changing the way brands engage their customers. As NFTs can go on to be resold on secondary markets, this also allows consumers to maximise the value derived from their relationship with a brand," he explained.

Citing American fast food chain Taco Bell as an example, Ragothaman said it recently sold its own taco-themed GIFs and images on an NFT marketplace known as Rarible. Proceeds from the sales of the NFTs were donated to the chain's Live Más Scholarship through the Taco Bell Foundation, while the original owner of the NFT would also receive an electronic Taco Bell gift card valued at US$500. Ragothaman said:

The virality and easily transmittable nature of NFTs in an increasingly socially and digitally-driven environment means that they can be used across multiple areas of a brand.

Besides being used in loyalty programmes, NFTs is also expected to transform how data will be monetised. PropertyGuru Malaysia's head of consumer marketing Ryan Thoo told MARKETING-INTERACTIVE that in future, it is possible where every individual would own a digital manifestation of themselves and have full control of their digital assets, including personal data.

"Now imagine being able to price your own data to advertisers. This puts power back into the hands of users in way that could never be imagined before," he said.

Thoo, who will be taking on the new role of PropertyGuru's director of consumer marketing on 1 April 2021, added that consumers should even be rewarded more if their behavioural data better matches the advertisers’ targeting, and brands will also benefit from improved accuracy. With NFTs, there is a possibility for everyone to be incentivised, he said.

At the same time, NFTs are also marketing tools themselves. With NBA's crypto-collectible NBA Top Shot, Thoo said the association has "effectively increased its customer lifetime value" and expanded its total addressable market beyond the existing basketball community. As of 24 February, NBA Top Shot has surpassed US$200 million in sales with more than 65,000 buyers involved, Turner's Bleacher Report said.

Transparency is also another advantage that NFT offers. According to Thoo, NFTs allow advertisers access to the source and "history" of every communication made, allowing for better attribution and reduced fraud. On the same thread, Entropia's Ramakrishnan said:

Intellectual property is something that is a massive contention in the marketing and advertising industry, and there could be a future where all concepts are NFT attached.

"The original can be traced back for the record at any given point to prove ownership," he added.

Interestingly, creators also stand a chance to benefit from the NFT hype. Currently, the most common way for content creators to monetise their skill is to work for a brand or use the intermediaries such as Facebook or YouTube. With NFT-based transactions, Ramakrishnan explained they now have an alternative to create and monetise without any dependencies. This would potentially impact the relationship between creators and advertisers, and content platforms, he added.

What type of brands would NFTs work best for?

Taco Bell is not the only brand to have leveraged NFTs in recent times. P&G's toilet paper brand Charmin released its own NFT - three original pieces of digital toilet paper art celebrating its mission to help everyone "Enjoy the Go" both in real life and virtually. Known as NFT(P), the art will be auctioned off and will come with a physical display so people can hang their NFT(P) in their bathroom alongside real rolls.

Meanwhile, TIME Magazine designed its first-ever cover exclusively as an NFT, accompanied by the title "Is Fiat Dead?" According to Yahoo! Finance, it plays tribute to the iconic design for its "Is God Dead?" and "Is Truth Dead?" editions launched on 8 April 1966 and 3 April 2017 respectively. The three covers will be auctioned on SuperRare, which Yahoo! Finance described as "a marketplace for digital artworks tokenised as crypto-collectible digital items to be owned and traded". In an added push into the digital currency space, TIME is also accepting cryptocurrencies for digital subscriptions, president Keith Grossman said in a tweet. In 2019, Nike also allegedly patented shoes in the form of NFT on the blockchain of Ethereum, blockchain publication The Crypto Updates reported. 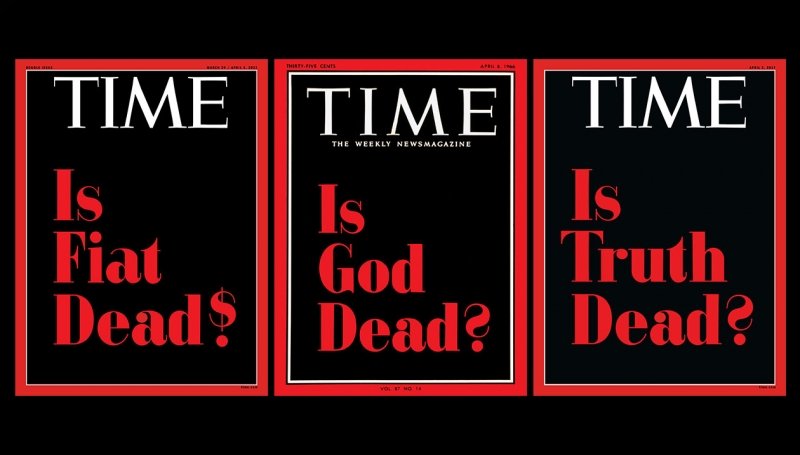 Entropia's Ramakrishnan is of the view that the first entry point for most brands with NFTs would be in limited-edition or digital collectibles. Also, gaming, fashion, shoes and loyalty-driven luxury brands will potentially be the first adopters of NFT for their campaigns.

"Brands can now worry less about losing ownership of their content due to fan-made alternations that keep spawning and have an unambiguous record of original versus altered versions," he explained. That said, it is not cheap to generate NFTs and the fee to enable the network transactions can also vary significantly, which in many cases is much higher than the value of the NFT that was created, Ramakrishnan said. Hence, while the costs become much clearer, he added that the entry point for a brand to use NFT at scale will be limited for now.

Established firms looking to jump on the bandwagon can get involved in NFTs for charitable purposes, such as Twitter and Taco Bell. Aqilliz's Ragothaman said any organisation can create an NFT, what matters is what it will represent and what it enables the owner to do.

"The blockchain industry has long espoused an open-source ethos when it comes to experimentation. In light of that, implementation is actually very straightforward as there exists a range of different NFT marketplaces that are already built to allow users to easily buy, create, and 'mint' their NFTs," he explained.

According to him, many of these marketplaces are built with an easy user interface in mind so that no technical knowledge or even an understanding of blockchain, for that matter, is required. In many ways, the experience is quite similar to creating any kind of listing on a peer-to-peer marketplace such as Carousell or eBay. As a whole, Ragothaman said NFTs are designed to be easily displayed on existing applications and websites, adding:

The issue is not so much that of implementation, but strong creatives to translate your idea in a visually engaging manner along with an underlying customer engagement strategy that will shape what the NFT itself represents and is used for.

Safe to say, the concept of NFTs is still new to many companies and naturally, this digital currency will work best with brands that are willing to disrupt their status quo. PropertyGuru's Thoo said brands that "get pumped from reimagining their own future will be the ones ready to embrace this new technology". To do so, companies need to have the right talent in place to capture the perspective of the digital asset community.

This can be done by working with partners that already specialise in the space or on board a special team comprising of native users. "Organisations then need to prepare themselves to be open minded about working with a much younger demographic who were born and raised in an environment that inspire completely new methods," he said.