Cafe de Coral confirmed to Marketing that the fast food chain is currently closing all its eastern China stores to "put a focus on the southern China market".

The Hong Kong fast food chain, which currently operates 359 chains in Hong Kong and 99 restaurants on the mainland as of March, will close its restaurants in Shanghai, Nanjing and Wuxi by late October. It first announced its news on its official WeChat account, according to South China Morning Post, advising members to cancel their membership and get a refund.

The closure of the eastern China stores is a "short term strategic adjustment" to put a focus on the southern China business, and the closure in Shanghai, Nanjing and Wuxi is temporary, its spokesperson said.

"We are performing well in the southern China market, and generally in mainland China we achieve positive growth," she added.

Earlier this March, the company said in its 2017 annual report that competition is likely to remain keen in Mainland China, but it's optimistic about the prospects in the country due to its "long history and strong foundation", and that the Mainland China operations achieved satisfactory same store sales growth and an improvement in profit margin.

"This will involve building our brand presence in strategic locations of core cities in Southern China, increasing our brand penetration in second and third tier cities, enhancing brand loyalty and winning over new customers," said the report.

As of March, the Group’s revenue by business division is set out below: 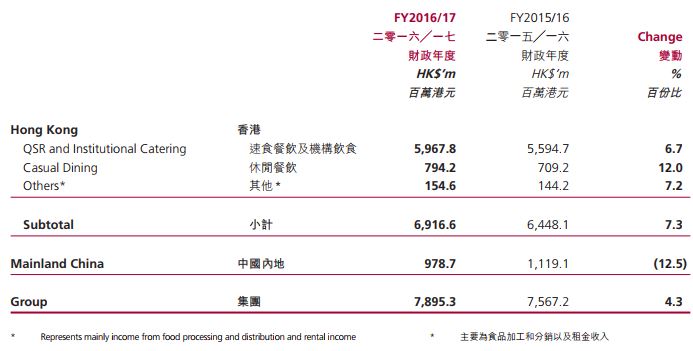 "Café de Coral competes in a segment which is very competitive. You can find Cafe de Coral type dishes in street shops at very low prices in China. This is different for western fast food chains that did not have to compete as much with low priced local equivalents," explained Pascal Martin, partner, OC&C Strategy Consultants.

Adding that the Cafe de Coral sit-down operating model requires expensive space, Martin said it seems likely that the productivity of the space in some of the Cafe de Coral restaurants may not have been high enough to pay the rent. In this case, Martin suggested that Cafe de Coral’s might take the consumers' changing habits with the growth of online ordering and take-out into account more fully in the future.

Another issue is that the brand in China may not have as much power as in Hong Kong yet.

"Insufficient investment in marketing (particularly online marketing in China) and lack of brand recognition may not have achieved the level of traffic needed to operate the restaurants successfully," he said.