Consumers in Asia want brands that engage in social issues – provided these are the causes that matter to them personally. According to Purpose in Asia, a new report from Kantar, 90% of consumers in the region and 86% in Singapore want brands to get involved in the issues they care about, meaning that an authentic brand purpose is now an expectation as opposed to a bonus.

Aligning with the issues that matter to consumers also makes business sense. 53% of people questioned in Singapore said they were more likely to buy brands aligned with their views, and a similar number (48%) said they would be happy to pay ‘a little more’ for brands with sustainability credentials.

The study also revealed a disconnect between the causes that dominate global media and international brand campaigns, and the issues that matter to consumers in Asia. While climate change and gender equality were the two high-profile issues most likely to be seen by people in Asia, causes closer to home mattered most to them personally, such as health and well-being or ending poverty. 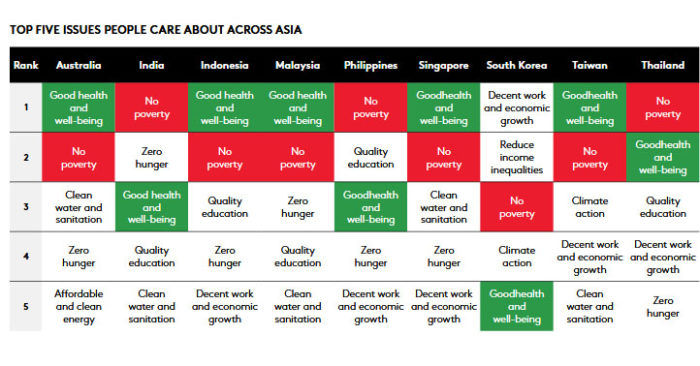 Social media analysis revealed the complex, interconnected landscape of  social issues that are being discussed  across markets, with topics taking on  different nuances depending on the country. The results did not differ hugely by gender or age. Good health and well-being was equally important to both genders across  all markets. Men were more likely to select poverty and hunger, while women were more likely to select education and gender equality, but only marginally. Younger people were more passionate about issues surrounding health, poverty, education and hunger whilst older generations were more concerned with decent work and economic growth, clean water, and affordable energy.

The study added that

Developed markets were more focused on the issue of decent work and economic growth.

This is especially where stagnating growth put the spotlight on rising unemployment rates and costs outpacing wages. Both Singapore and Taiwan saw common  themes around using foreign talent to rejuvenate the economy, with a sense of pessimism over whether it was possible for government action to improve wage or some issues, there was also a notable difference between what mattered to consumers in emerging and developed markets.

Quality education emerges as an important issue for all of the developing markets in the study – India, Indonesia, Malaysia, Thailand and the  Philippines – where it is seen as a stepping stone out of poverty. Across many of these markets there was harsh criticism levelled at a dissatisfactory public education system, which was often blamed as a root cause of the poverty cycle. The seriousness of the dissatisfaction ranged from angry to hopeful: in the Philippines, many different social hashtags abounded as a rallying point for furious college students protesting for better tuition fees.

In Malaysia, netizens shared positive and inspirational stories of local educators who had gone beyond the call of duty to teach their students.

The results of the study highlight the role of social media in circulating information about causes. 41% of people in Singapore said that they had liked posts on social media around an issue they cared about, and 34% have shared a post or article.

TV was still the channel where most people heard about social issues, however, the rise of social media in many countries in Asia is facilitating a more active form of participation.

Social media was also seen to be impacting behaviours with 55% of people in Singapore saying that they were more conscious of an issue in day-to-day life after seeing a post about it on social media, whilst 23% said they have changed their behaviour as a result.

Overall across Asia, 72% of people reported to have heard about climate action on TV and results showed that the exposure to issues on TV was highest in emerging markets like Thailand, where three-quarters (77%) of people received news around SDG issues from TV, followed closely by Indonesia (75%). India was the only country in the study where TV did not dominate – in its place, social media was the leading platform for conversations around these topics.

Online news channels and social media take up the secondary role in propagating news about issues, with gender being the top topic that was covered here – 56% of people said they had seen discussions Facebook is the most popular social media site generally, used by 85% of people across the region. It was also the channel that was most likely to be used to discuss the social issues that people care about.

This was followed by WhatsApp, which despite being a private forum, was a popular place for people to engage in debate on these topics. However, Instagram is also very prevalent across the region and its visual currency working well to propagate issues. Good health and well-being was a particular topic that was discussed across channels, with a high level on Instagram and Twitter.

Traditional forms of media such as newspapers, radio and magazines were not as central to the circulation of news about these issues. However, they were consistently cited – between a quarter to a third of people (depending on the issue) said that they hear information through these channels, demonstrating their continued importance within the media mix.

Some of the most important issues for people in Asia, such as well-being and education, were also the likely to be discussed amongst friends and family. In fact, one in three people across Asia said they do not like engaging with issues online and would prefer to take the conversations offline.

In terms of how brands should engage with issues, authenticity was key. Consumers were quick to challenge brands that outwardly supported a cause, but at the same time had problems with their own business practices, or brands that misjudged the tone needed to engage in emotionally-charged issues.

Only 33% of Australians felt that brands were able to authentically engage with issues, in comparison to India where 74% perceived it as trustworthy brand activity. Consumers believe that brands have a key role to play in advancing the issues that matter to people. Educating consumers about an issue was the top activity cited, followed by initiating and funding programmes to support the issue, and then funding organisations directly.

Joy Lee, regional digital consultant for Kantar’s Insights Division said: “Brands have understood the power of purpose for a number of years now. However, the challenge lies in identifying what resonates across the diverse landscape of Asia, and then engaging in an authentic way. Brands now have permission to get involved and make a difference. The good news is that this isn’t necessarily about making a lot of noise on the global stage. It can also be about supporting local initiatives and driving small but meaningful change where it matters most to people.”

SPH taps on to McD's network to grow newspaper readers

"We are the only full-fledged advertising platform that marries an extensive on-ground fleet of vehicles with rich digital presenc..

The only way to survive the zombie epidemic is to stay entertained...

Last month saw ad spend in Hong Kong slump for the first time in four years, according to admanGo. ..