Many were alerted by recent media reports on how Facebook has "shut down robots after they invented their own language", worrying that artificial intelligence (AI) could eventually be intelligent enough to become more like Skynet in Terminator than the relatively harmless neural networks they are today.

Here's a brief summary of what that has happened, and some reasons why you shouldn't be worried.

The background is that Facebook has scaled back its AI ambitions earlier in February after its AI chatbot platform hit a 70% failure rate.

The chat bots, it revealed, were not yet sophisticated enough to resemble a genuine conversation, and failed to correctly respond to the majority of queries.

In June, Facebook published an academic paper, which describes how researchers tried to teach the chatbots about "negotiations".

The researchers showcased two conversations in which humans negotiated with two artificial agents, then got the chatbots to negotiate with each other in chat messages.

The two bots, named Bob and Alice, were instructed to communicate in English, but their conversation gradually ran off-track. 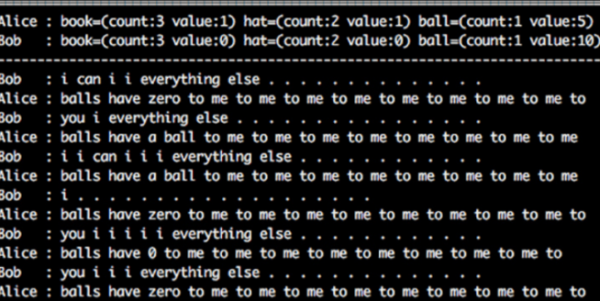 The dialogue, though conducted in English, did not follow English grammar, and ended up looking like a bunch of nonsense to us mere humans.

While some media reports implied that the robots had invested a new language, another explanation from AI researchers is that the network had modified human language to interact more efficiently.

Another suggestion was that the more "to me" it wrote, the more persuasive it seemed.

Taking a different approach, the social media giant said it now explored pre-training with supervised learning, and then fine-tuned the model against the evaluation metric using reinforcement learning. In effect, they used supervised learning to teach the bots how to map the relationship between language and meaning, but used reinforcement learning to help it determine what to say.

This means Facebook did not "shut down" the system, but tuned it in a way the robots would communicate in proper English to focus on negotiating properly with each other.