‘We are not Kay Kia. We are IKEA,’ says new IKEA campaign for Penang store

In line with the launch of its new store in Penang, IKEA has rolled out a quirky campaign celebrating the city’s culture through the use of light-hearted Hokkien wordplay. Developed by BBH Singapore, the campaign aims to drive awareness and generate excitement for the store’s opening on 14 March.

Using the phonetic similarity of some popular Penang Hokkien words with the Swedish company name, the campaign plays with these rhymes to capture attention. One of the executions shows parallel images of a chicken and a cabinet with the words “We are not Kay Kia. We are IKEA.” Kay Kia is the Hokkien word for chick. Another execution features a tall guy and the BILLY bookcase with the lines “We are not Lo Kha Kia (a tall guy). We are IKEA.” 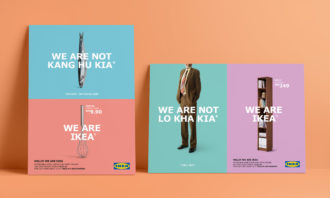 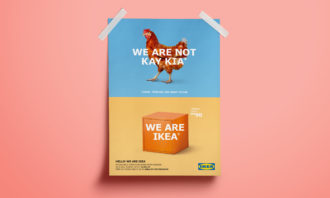 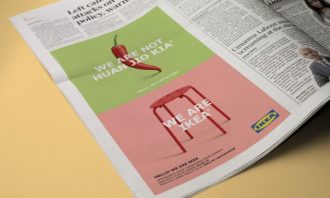 The first phase of IKEA’s campaign rolled out on OOH, digital, print and social media platforms. The second phase will focus on product-centred stories that demonstrate the IKEA values of sustainability, creativity and simplicity. This phase of the campaign is supported by rich, immersive spots that will run on digital platforms.

IKEA Southeast Asia’s head of marketing, Nigel Richardson, said the team wanted to introduce IKEA to Penang with an engaging and relatable campaign that takes into account the unique cultural nuances of the city. “The new campaign has already created a lot of buzz and we hope to sustain the excitement through the second phase of the campaign,” he said.

BBH Singapore’s creative director Gaston Soto added that the campaign was inspired by Hokkien memes listing words that end with “Kia”. Through this wordplay IKEA is paying tribute to the rich culture of Penang, he said.

IKEA’s fourth store in Batu Kawan aims to serve more than 6.6 million people in the northern region. Marketing efforts ahead will be focused on driving awareness as it is a new market for IKEA Malaysia. Among the initiatives lined up include a roadshow for its IKEA FAMILY membership sign-ups throughout Penang and Northern Malaysia.

Asia PR Werkz developed and will execute an integrated communication strategy that includes media management and will oversee the ..

A series of six inspiring stories will form the core of the six-week campaign that takes in TV, digital, branded content and socia..

This is in conjunction with World Suicide Prevention week. ..