Warren Buffett is the new face of Cherry Coke in China

Coca-Cola received permission from US billionaire Warren Buffett to put his picture on its newly launched Cherry Coke cans in China. 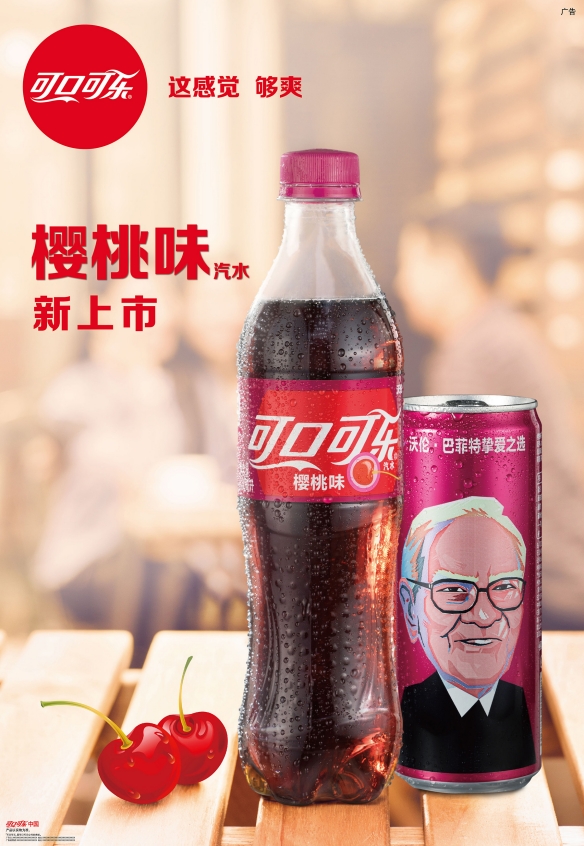 “As we thought of the most creative ways to bring the great taste of Cherry Coke to China, we thought who better to celebrate the launch of this special drink than its best-known fan.

“We honestly were surprised when Mr. Buffett agreed to the idea. But we’re thrilled, and he’s selling well,” Lin continued.

Buffett is frequently pictured in public drinking Cherry Coke, and his investment firm Berkshire Hathaway is Coca-Cola’s biggest shareholder, with nearly 10% of the shares.

Yahoo Finance reported on how this all came about. “Four or five months ago, [Coca-Cola Chairman and CEO] Muhtar [Kent] said they were going to introduce Cherry Coke into China and asked me about putting my picture on the cans and bottles,” Buffett told Yahoo Finance.

“I said it would be fine to do it for the first six months after launching the product. If there are no problems associated with this and he asks me to continue, I will likely say OK. Incidentally, there is no compensation involved.”

For the drawing, Buffett said, “I did not sit down for a portrait. I think Muhtar knew better than to ask for this; I’ve never been keen on that sort of activity.’”

Launched in mainland China on 10 March, Cherry Coke is available in both traditional and modern trade outlets in 330 ml cans and 500 ml PET bottles. Buffett will appear on the special-edition cans for a limited promotional period.

Havas takes 51% stake in a joint venture with GIMC

Hong Kong marketers, are you ready to make better use of data in 2018?

While January is a relatively quiet month in Hong Kong, it is always a good idea to kick start the New Year with momentum...

Advocacy opens its doors in India

Advocacy has launched its India operation with Srikanth Sarathy as COO. ..

The vice president of Twitter, Shailesh Rao, is moving on...

From the war chest: Malaysian marketers on biggest learning moments in 2017

Let's check out what these marketers had to share here. ..

The two carriers expect to begin codeshare and interline agreements that will give customers access to destinations in China, as w..