With Valentine’s Day around the corner, it seems like love is in the air. In terms of romance, the internet love story is plenty promising as 55% of Singaporeans know at least one couple who met online.

Tinder is a clear favourite in Singapore, scoring among the highest for both fame and respectability. 84% of Singaporeans have heard of Tinder and 51% of those who have ever used online dating say it is considered respectable. Just 29% consider to be “not respectable", giving it a net score of +22 – the second most respected platform among all apps featured in the survey. The highest scoring service for reputation is Coffee Meets Bagel, with a score of +23, despite an awareness score almost half of that of Tinder (45%). 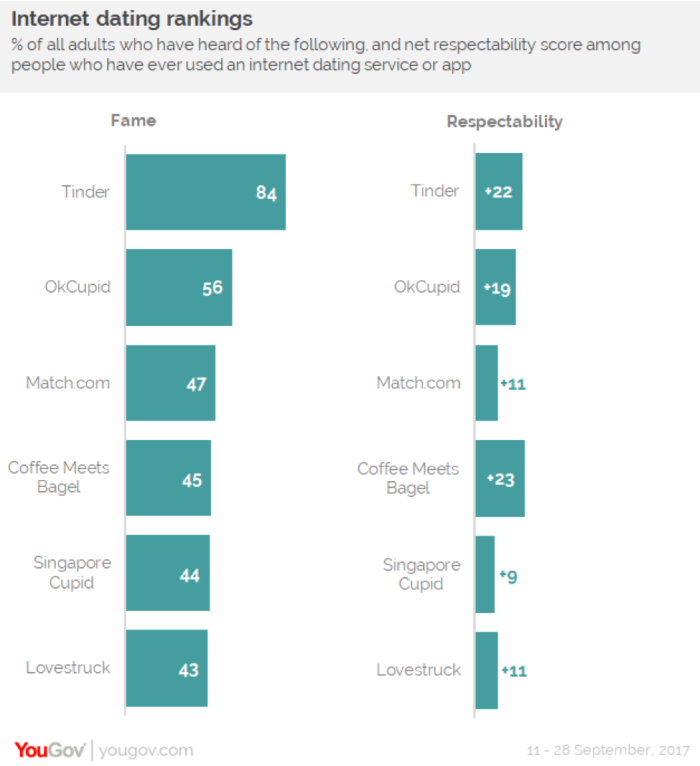 According to a new YouGov research, as many as a third of Singaporeans have used internet and online dating apps. This rises to 43% among Millennials. Yet, a similar proportion of Millennials (47%) also say they would be embarrassed to admit that they had met their partner through online dating/apps. A third (34%) of baby boomers say the same.  However, three-quarters (73%) of Singaporeans say they would not think of a couple that met online any differently.

Meanwhile, according to Picodi.com which surveyed over 5,600 people from 32 different countries (including Europe, Asia, Australia, Africa and both Americas) to find out about the local perception of Valentine’s Day. Singaporeans are generous on Valentine's Day, spending SG$144 on average.

According to the study, Singaporeans tend to enjoy Valentine’s Day. At least almost two thirds of them (precisely 61%). The other 39% refuse any form of celebration. Having pointed that out, these results are most likely good news for all the restaurants, cinemas or gift shop owners, as well as jewellery stores —those are in fact the most popular forms of gifts.

Precisely one third of male Singaporeans will offer their soulmates a romantic date in the restaurant, 29% of men is going to choose jewellery and almost a quarter (24%) prefer cinema as their go-to option. Interestingly, most women will decide for a more personalized approach: handmade gift (33%) or Valentine’s Day card (17%) are among top female choices.

But what about the expectation itself? Which gifts would really win Singaporeans hearts? A date in the restaurant is hands down the most preferable option both for male (63%) and female (55%) part of our respondents. Should we mention that almost half of men (45%) would be over the moon receiving cash? Once again women prefer more romantic approach—travel/trip out of town (35%), cinema/theater (31%) or simply flowers (25%) would do it.

Be sure to avoid giving your beloved girlfriend a plush toy—24% of women hate them.

Want to spice things up instead? Watch out—neither underwear nor sex toys work (22% of women think that’s a terrible idea for a gift). Trying to impress men? Remember that more than a quarter of them (26%) stated that a date in the restaurant is not really what they are looking for on such occasions.