International brands are disproportionately favoured as local labels continue to lose ground to foreign competitors in China, according to OC&C Strategy Consultants' latest study, "The China Apparel Market: Indigo is the new blue".

According to the research, which was launched during March to April 2017, covering 2,450 respondents from different demographic groups across 22 cities in China, among the top 60 brands in China, the combined share of Chinese players has dropped to 59% in 2016, down from 64% in 2011.

Shoppers of international apparel brands rate "better quality" (34%) and "better design" (33%) as the most important reasons for their choice. 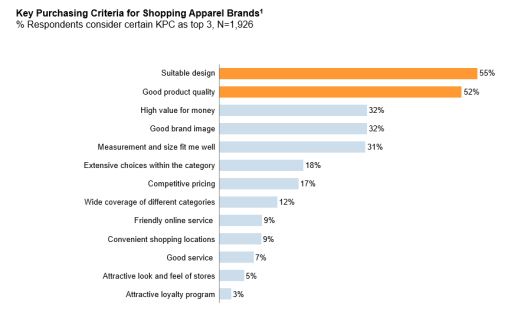 When asked about the reason for not purchasing Chinese apparel brands, "poor design" (37%) ranked top, followed by "insufficient choices within the same category"(22%).

“Patriots” of local brands, on the other hand, are younger and typically come from lower income brackets. They are also frequent and small-ticket shoppers, with a smaller annual spending on apparel.

“Value for money” (40%) and “Chinese elements” (39%) are the top reasons they choose Chinese apparel brands. 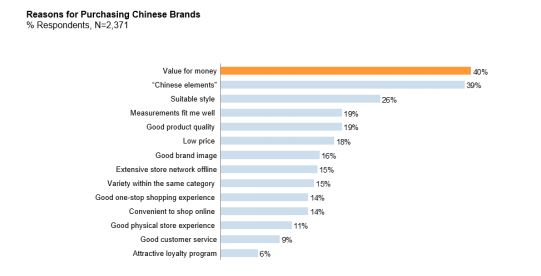 He noted the intense competition for customers, especially female, in their twenties to thirties and that some foreign apparel manufacturers were spending significantly on marketing vs the 2-3% spent by Chinese companies (La Chapelle and Heilan Home).

Despite China’s much publicised move to e-commerce, there is still an over reliance on bricks and mortar distribution in the face of escalating rents. Smart apparel manufacturers will build awareness and use the recognition to distribute through less expensive means, deploying physical retail space more selectively and strategically to reinforce the brand.

Part of the reason why Chinese apparel brands failed to achieve similar level of awareness versus international counterparties is that they tend to distribute through department store boutiques often on upper floors, the research also reveals.

This compares unfavourably with the impact of large storefronts at street level offered by foreign apparel firms such as Zara. 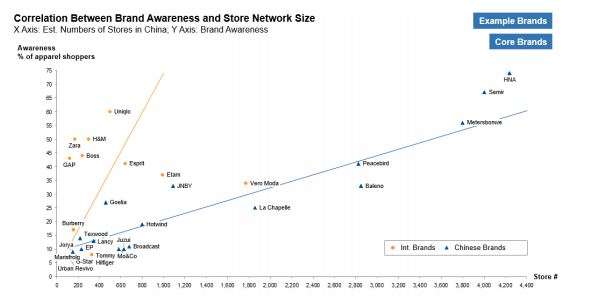 There is also scope to improve inventory control using an agile supply chain based on POS data collection and analysis. Data would support more streamlined product offerings targeted at specific locations. The study showed that inventory book value reached 30+% of annual revenue for some retailers (vs Zara: 11%) and that many are well below the industry standard inventory turnover rate of 2.0.