In the media landscape’s head-to-head race, TV remains the top media channel (92%) in Hong Kong, supported by the emergence of various new TV channels and the maturation of OTT viewership, according to Nielsen’s latest report.

The internet (91%) is quickly catching up to TV and is now the second most popular media channel. Among newspaper consumption, it has been observed that there is a rising trend of readers who consume news via both the printed hardcopies as well as digital version.

It has been a general perception that TV would soon be surpassed by the internet as the most popular media channel in Hong Kong, however, the situation has only slightly changed, driven partly by new TV channels, such as ViuTV, coupled with increasing OTT viewership. 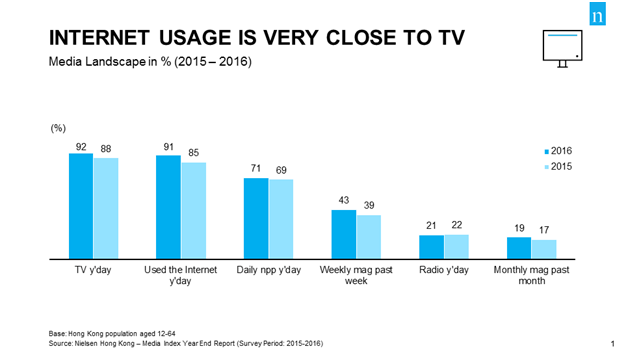 The penetration of television has increased from 88% in 2015 to 92% in 2016, despite fierce competition. The maturation of OTT viewership resulted from rapid technological advancement and has made a significant contribution to the growing TV penetration. Audiences can now watch TV anywhere at any time and on any platform. 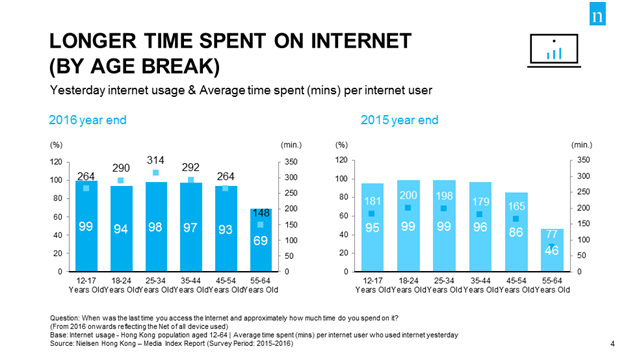 Looking into different age groups, the average time spent on internet has increased among all age groups, among which, the penetration of internet of the silver hair age group, i.e. 55-64 years old, has shown significant increase from 46% in 2015 to 69% in 2016. This change further indicates that the internet reaches across all generations, including the more mature population groups.

In addition to the evolution of the internet, the uprising of the smartphone is happening concurrently with the increase in internet usage. Smartphone ownership has gone from 85% in 2015 to 91% in 2016.

People are more than ever connected to the digital world with the development of the internet. Over 90% of internet users use the internet for instant messaging (96%) and social networking (91%), as another 88% watch videos online while 81% perform information search. Shopping is also emerging as a popular trend, with eight in 10 Hong Kong shoppers having made an online purchase in the past 12 months.

“Following the increasingly wide reach of the internet, marketers looking to engage consumers effectively will need to precisely measure the ROI of their ad investment on both TV and digital screens. The opportunity to reach consumers on a number of channels is growing, so maximizing total ad investment across devices and platforms will be crucial to the success of today’s brands,” said Cherry Lau, senior director, media, Nielsen Hong Kong.

Printed newspapers are now complemented by the digital version

Print media has been facing fierce competition with the rise of different forms of digital content. However, it is worth-noting that while those who read printed newspapers are still keeping their habits, the percentage of people who read both digital and printed version of newspapers has increased from 16% in 2015 to 23% in 2016. This indicates that readers might continue to rely on print versions for in-depth reporting of news stories but they also rely on digital versions for more timely news updates.

With the latest network extension, MTR has surpassed buses and becomes the most popular transportation, an increase from 67% in 2015 to 73% in 2016. With MTR being the most frequently used transportation, the reach of MTR advertisements (71%) also topped the list of outdoor ads seen, followed by bus exterior ads (66%) and bus shelter/ bus-stop ads (62%).

Facebook Indonesia tightens up ad rules ahead of elections

Besides restricting foreign electoral ads and inauthentic information, Facebook is also setting up an operations centre focused on..

TBWA\ and Cooler Lumpur pair up

The festival adopts specific themes each year with the aim to expand the city’s cultural horizons...

Celestial Tiger Entertainment has appointed Brandthink Malaysia as its PR agency on record, putting the agency in charge of new la..

YouTube’s child video exposé: What do local marketers think about it?

A week after the expose, what are local marketers feeling about YouTube’s video platform? ..

The company has since taken employee personnel remedial actions and made improvements to its internal controls to mitigate such ca..