Singapore has possibly garnered SG$767 million in exposure, following the conclusion of the recent historical Peace Summit, which saw the leaders of US and North Korea coming together. The event also saw Singapore footing a bill of SG$20 million, half of which went into security measures. The country also played host to 2,500 media journalists who flew down for the event.

The report captured and analysed mentions of “Trump” or “Kim Jong-un” in relation to Singapore or Sentosa from 1 June to 13 June 2018. The report only monitored global online media, not taking into account local language translations of "Trump", "Kim", "Singapore" or "Sentosa".

Meanwhile, the figure which was calculated by using a reach number provided by SimilarWeb was multiplied by 0.025 (which is the probability that someone will read the article), then multiplied by 0.37. This amounted to the monetary value of someone reading the article, which Meltwater says is a one of the standard industry formulas that the dollar equivalent is equal to around US$0.37 for an article.

The report also did not take into account print, broadcast or social media mentions. Considering the amount of buzz that was generated on this topic in the last 30 days, Meltwater also moderated the figure to an industry standard of 6% that takes the high volume of content into account

"All of the official channels from the Singapore Government used Facebook's streaming video capability to update the world on this historic meeting, showing the power of digital, as well as the importance of social listening,” Mimrah Mahmood, APAC regional director of media solutions, Meltwater, said.

That being said, the report highlighted that while AVEs give a rough gauge to the success of a campaign, it may not be the “most accurate or most definitive way” of measuring the success or ROI of a campaign. This is due to the many variables which go into calculating the figure and the lack of a standard industry formula for ad spend.

“While these formulas can give an approximate idea of the scope of coverage, and potentially ROI, they are generally considered very subjective by professionals in the communication industry,” the report added.

Key conversations surrounding the Trump-Kim summit in Singapore included the costs of hosting the summit, data from Isentia read. The report added that many netizens took to forums to display their disapproval over the high costs that may be accumulated with hosting of the summit. This includes paying for security and various logistics for foreign journalists.

That being said, some netizens also mentioned that these costs were part and parcel of hosting the summit. Another conversation topic was also the potential inconvenience caused during the summit from road closures and tighter security checks. Top channels of conversation according to Isentia include forums, followed by Facebook, then Twitter. 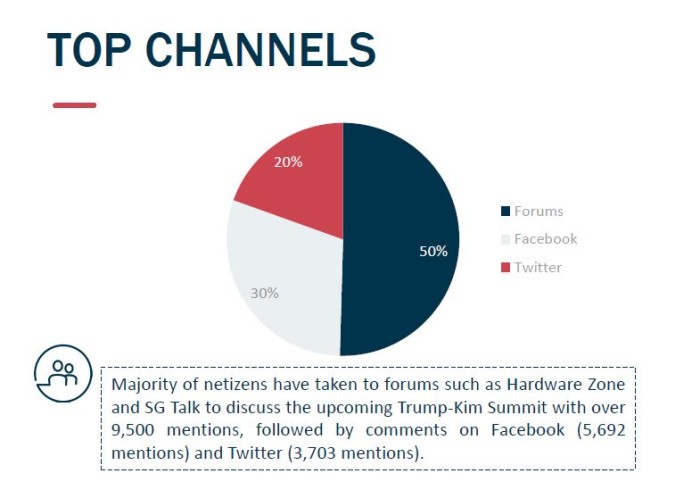 Following the summit, brands in Singapore have garnered attention, including hotels and locations such as Sentosa, Shangri-La Hotel, Capella Singapore and St. Regis, which were touted as possible locations to host the summit.

Meanwhile, F&B outlets and lifestyle brands in Singapore have also risen to the occasion in a bid to snag a bite of the action – creating new food dishes and promotions to commemorate the occasion.  This includes KFC, IKEA, Coca-Cola and Nando’s, to name a few.

Decathlon and NBA team up globally for league-branded merchandise