A day after Pink Dot SG unveiled its new ambassadors for this year’s event, Ah Boys to Men actor and local rapper Tosh Rock copped flak from netizens for his past derogatory comments against homosexuals.

Since then, the rapper has stepped down as an ambassador for Pink Dot SG and through an Instagram post, Tosh apologised for his remarks which were made over a decade ago. He also revealed that he will be taking a break from social media. Nonetheless, over the years Tosh has pushed for LGBTQ rights in Singapore, standing against the legislation of Section 377A of the Penal Code in Singapore, and has constantly voiced his stance in equality for the LGBTQ individuals.

Speaking to Marketing, Wai Yin Ip, director at Golin said it is unfortunate Tosh had to step down due to the backlash online. Ip said the rapper’s growth as someone who owned up to their past mistakes, and is now using what he learned to stand for a worthy cause, “makes for a convincing ambassador with a compelling story to demonstrate that change is possible”.

Meanwhile, Martin Alintuck, managing director at Ruder Finn Asia said given the current social media-crazy world, Tosh had no other choice than to resign. Alintuck also applauded the star for taking a break from social media and said many stars have been down this route:

“Tosh forgot that social media posts including photos and comments never go away. There is always someone willing to dig up dirt from the past,” he said.

I believe he is hoping a break from social media will allow things to cool down and he can come back and re-introduce himself to his fans, and those offended by his past remarks.

However, Alintuck added that the challenge lies in being offered a “do-over” as the world of social media offers few “do-overs” for perceived bad behavior. “We all have said dumb things when we were young we wish we hadn’t. It’s called growing up. But the ability to search the Internet means nothing disappears,” he added.

Alintuck was of the view that as a PR professional, he would have advised Tosh “to get out in front of his past toxic remarks” when engaging with an organisation such as Pink Dot SG. He added that Tosh has to now acknowledge and share how much he has changed and matured as a human being.

Meanwhile, Pink Dot SG has posted a statement around Tosh’s decision to step down as ambassador. On its Facebook page, Pink Dot SG said Tosh’s previous tweets were “deeply distressing” and that the organisation does not condone homophobic and misogynistic speech.

“The hurt and harm that such language can cause is all too familiar to us. Indeed our 2019 campaign is focused on the discrimination our community faces, discrimination that breeds such hurtful words,” the statement read. Pink Dot SG revealed that it has reached out to Tosh for clarity on his stand and to discuss further actions.

“Tosh has since posted a statement, acknowledging that he used to be ignorant to the pain, struggles and discrimination that LGBTQ people faced. He has also apologised and taken responsibility for what he had said. While we fully understand that such hurtful words remain etched in the minds of many in our community, we believe that this is a possible opportunity for genuine dialogue on the discrimination LGBTQ people face in Singapore,” the statement read.

According to Meltwater’s statistics, overall sentiment around Tosh’s situation has been surprisingly positive. Meltwater’s regional director of media solutions, Mimrah Mahmood said while the initial reactions online arose from Tosh’s old social media posts, it is interesting to observe how subsequent conversations have evolved into discussions around privilege and ally-ship.

“Organisations that tap on to deep-seated issues must listen to their audience, who may have differing opinions – especially on social media – so as to better understand their audience and then engage with them with empathy and understanding,” he added.

Some of the widely searched key words include, “tosh zhang”, “pink dot”, “ambassador”, “tweets”, “homophobic” and others. The traffic online surged between the day he was announced as an ambassador and the day he decided to step down from Pink Dot SG. 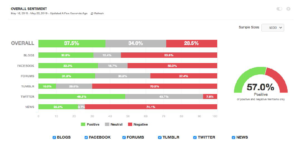 Accenture files motion to dismiss Hertz's lawsuit in its entirety

Prudential has agreed to be the title sponsor for Madison Sports Group’s Hong Kong extension of its international cycling Six Day ..

All Fliggy members will be eligible to become Gold members of the Shangri-La's Golden Circle programme under the collaboration. ..

Chinese internet giants have planned to invest in an Internet-TV startup, according to Xinhua...

The spots were conceptualised and produced by Contract Communications, a subsidiary of J. Walter Thompson Malaysia...