Instead of using push notifications, brands in Asia Pacific region, including Malaysia are increasingly trying to engage consumers using targeted ads . This is a method that reach users at relevant times which help retain them over the long run, said Google’s latest study titled “How APAC and Malaysian consumers are using mobile apps.”

Through the course of the study, Google’s research partner TNS surveyed over 10,000 people across 10 Asian countries to find out what drove consumers to install and engage with mobile apps. In an interview with A+M, Google Malaysia’s head of business intelligence HC Lim shared top five tips for the brands and marketers in Malaysia and some examples of targeted ads for mobile users in Malaysia.

1. Set up deep links: Deep links will take folks directly to the parts of your app where they can easily take action. This reduces friction and increases engagement.

2. Track app engagement: Track what users do in your app after they’ve installed. This informs audience segmentation and campaign optimisation.

3. Drive app engagement with your messaging: Advertise a compelling reason for users to engage with your app. This personalises the ad and improves performance.

4. Drive app engagement using display and search: Create a display app engagement campaign (Android and iOS). This is so you can engage with specific user segments at scale as they’re using other mobile apps across the Google Display Network.

5. Create a search app engagement campaign (Android only): Engage with users in moments of intent as they’re looking for what you offer on Google Search.

For marketers looking for high engagement, reaching users at the right time is key.

Tips aside, Google said one of the reasons why marketers have shifted from their usual push notifications strategy is  because these notifications may prove to be ineffective over time. Malaysia, for instance, is one of the top countries with this phenomenon given that 38% of its mobile users turn off notifications for nearly half their apps.

Meanwhile, the research also said that Asia is one of the world’s leading regions for mobile apps, be it for search, instant messaging, social networks, or gaming.

Apps are the driving force of the mobile phone experience in Asia, with the average Smartphone owner using at least six apps daily. Users in emerging countries have a lower number of total apps on their phones, partly due to the prevalence of affordable, lower capacity phones. However, these countries have a higher proportion of apps that are installed by users themselves rather than those that are pre-installed.

App usage is so prevalent in Asia that in most countries, people turn to apps as often as the mobile web. However, in Malaysia, people still prefer to turn to the mobile web over apps due to relatively good cellular data connectivity. 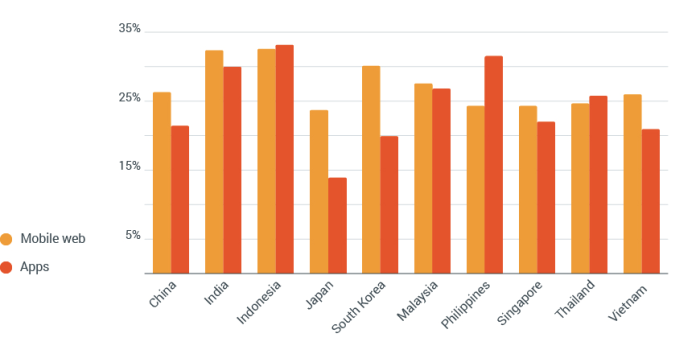 Percentage of total time online spent on mobile vs apps

Search on a web browser is another major source of app discovery, with at least 20% of app users in all Asian countries discovering apps this way. In some countries, this number is much higher: 45% of users in Vietnam discover apps through search, 38% in India, and 31% in Korea.

It’s also good to note that while acquiring new users, it is important for brands, finding the most valuable ones is just as vital. People who make in-app purchases are often the highest value users, with 58% of app users having made an in-app payment via the app store.

There are many reasons why users uninstall apps, but users in Asia commonly delete apps that are no longer relevant. In a market where users’ phones have limited storage but are bursting with apps, it is a challenge to continue engaging users and avoid being uninstalled.

Plus, having an app installed on a user’s phone doesn’t mean they’re actively using it. If an app is seldom used, it’s more likely to be uninstalled to free up storage space.

Fortunately for marketers, the study added that,

The vast majority of app users across Asia say they would likely use apps again if given a reason to do so.

According to Alliance Bank and EcoWorld, this is a creative and innovative way for finalists to improve their chances of being sel..

The themed carnival has decorated the seven-meter-tall archway entrance at Ocean Terminal Forecourt with giant statues of the Toy ..

Addressing the issue of foreign talent in Singapore

"Marketing is driven by talent and great business minds which can come from anywhere, whether here in Singapore or from abroad."..