The Standard Chartered Singapore Marathon (SCSM) organisers, IRONMAN Group, have apologised to members of the public via a Facebook post for the inconvenience over the past few days of the event. This comes after several netizens took to social media channels to voice their frustration over three hour traffic congestion caused by the event.

On the online verse, one particular Facebook user said that closing roads in the CBD, Marina area, Keppel area, and some parts of West Coast and East Coast on a Saturday afternoon was "stupid and selfish".  The netizen added that Christmas is around the corner which may require several to head over to town area for shopping, and asked for the organisers to "have compassion" and not "simply close roads on a Saturday evening as it affects a lot of people – many of whom are working".

The organiser addressed this in the Facebook post, saying that the planning of an inaugual evening marathon was a year in the making, with stakeholder outreach programme which begun in January 2019. According to IRONMAN Group, full traffic studies in consultation with various partners were done prior to the event, with over 230 stakeholders contacted and advised with solutions for alternate routes mapped out for race day.

"Extensive road advisories were disseminated via media outlets alongside SCSM’s digital channels, and roads were reopened progressively to minimise inconvenience caused to road users," the post read. The SCSM has been ongoing for the last 18 years and introduced a new format this year.

The Facebook post comes after the organiser said in an interview with The Straits Times that the marathon garnered positive response overall, but also "could have done better". The organiser explained that it was the first time trying out a new format, and acknowledged that there were issues around it.

Earlier this year, the organisers sent out a media release to inform members of the public and participants that SCSM will be shifted to an evening race, in a three-day event format.

According to the organisers, these steps were taken to further the appeal of the race for participants and spectators and as well as to push the marathon to be inducted into the global Abbott World Marathon Majors. The three-day event included spectator-friendly route through Singapore’s iconic streets to give fans and runners a different perspective, as well as a myriad of lifestyle and entertainment offerings for those who were not participating in the run. 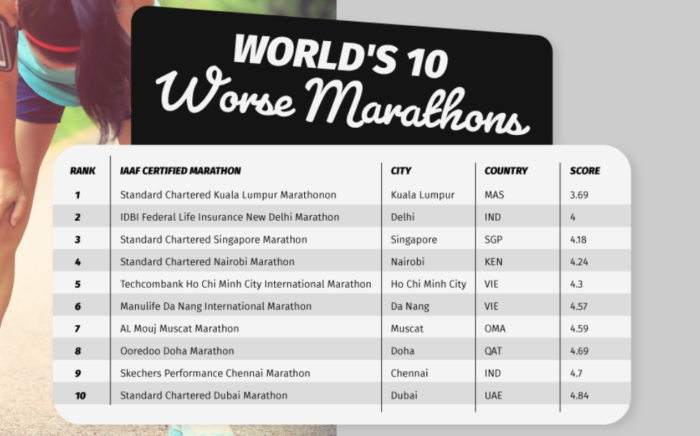 Meanwhile, SCSM was ranked third under world's 10 most worse marathons, according to footwear retailer Sole Suppliers. The company crunched data on the courses such as average finish times, medical stations, toilets, entry fees and how good local hotels are, as well as and environmental conditions for the rankings. The rankings report said the worst marathon in the world is the Standard Chartered Kuala Lumpur Marathon, scoring just 3.69 out of overall. This was let down by the city’s air pollution levels, hot climate, slow average finish time and lack of medical aid along the course. The marathon held in Singapore was not far along, scoring 4.18 out of 10.