Snapchat lures the young in the US, but can it do the same in Southeast Asia?

It seems like Snapchat still has a significant amount of fight left in it as younger users are still using the platform. According to a report by eMarketer in August 2018, Snapchat takes the lead with 16.4 million users aged 12 to 17 on its platform, beating out Instagram at 12.8 million and Facebook at 11.5 million.

Snapchat first surpassed Facebook in 2016 as the most popular social network among US teens and this year’s figure of 11.5 million teen users on the platform is a decline from last year’s figure (12.1m). 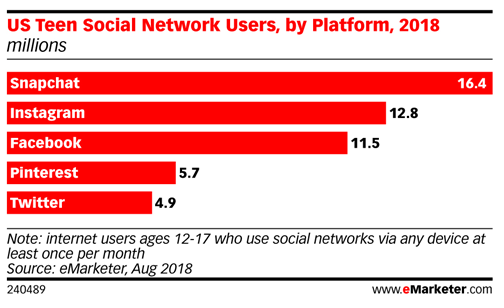 “Snapchat and Instagram are the top social apps for teens, and this year they’ll add nearly the same number of new teen users,” eMarketer senior forecasting analyst Christopher Bendtsen said. Although the stories format is generally a growth driver on social media platform, Facebook has been unable to retain its younger users.

However, the tables were turned in the eMarketer report focusing on Millennial user trends. It highlighted that Facebook holds the top spot with a user base of 58.5 million for social media platforms that Millennials surf on regularly. Instagram comes in second with 43.3 million Millennials preferring its platform. 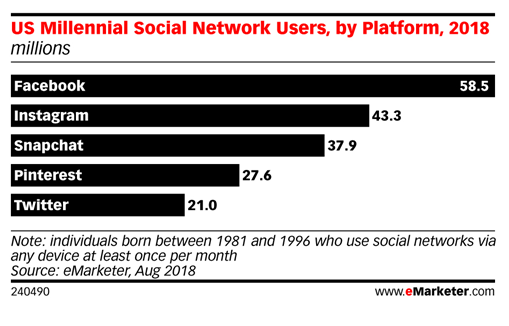 With the statistics above, it was evident younger users in the US chose Snapchat as a go-to app compared to the other two network giants. Speaking to Marketing, Johanan Sen, head of strategy, dentsu X Singapore said that the adoption of Snapchat is fairly low in Southeast Asia as opposed to the data in US. As such, it is unlikely that we will see a similar thing happen in our region.

Jeffrey Lim, general manager of Carbon Interactive echoed the same sentiment that it is unlikely to have Snapchat take over Facebook in Southeast Asia, but added that younger audience have moved away from Facebook nevertheless.

Marketing also had a conversation with Dennis Wong, managing director, Reprise Indonesia who said that in Asia, Snapchat usage will not be overtaken by Facebook.

Highlighting on statistics from Global web index on Indonesia’s social media trends, Wong added that 73% of Indonesians have used Facebook in the last month as opposed to 26.6% who used Snapchat in the same month. He also said that Snapchat has gained traction in the European and US markets, but has yet to gain that popularity in Asia which is an obstacle as more established platforms are preferred here.

Keeping up with change

As trends may seem uncertain and ever-changing, marketers have to reduce risk while increasing effectiveness at the same time, adding that some issues are only resolved when trends hit a certain scale. Marketers have to be regularly updated through research, market visits as well as when consulting marketing service agencies should they stay in touch with their customer’s current lifestyle and the things that influence their behavior, Wong said.

Being in tune with customers today means that trends that affect them will also affect the marketer. In terms of the evolving social media scene, Wong said that social media platforms can be tuned to feed readers with content that reflects their interests, beliefs and values that it is now called the “social media bubble”.

The evolving social media scene has made us as humans more tribal and fragmented than ever.

Lim added that with trends changing frequently, it is vital for marketers to constantly learn to understand the emerging platforms and trends to stay relevant. However, he also said that it is more important for marketers to understand the customer needs and behaviours before “jumping” on trends, which also enables better content, products and services for their customers.

Marketers have to understand the push versus pull marketing tactics to effectively use the digital marketing space.

Lim said that in social media, it is more of a pull marketing tactic where brands and organisations have to curate brand stories for customers to engage and converse. “This will enable brands to grow not just their customer base, but also a tribe of ambassadors to help evangelise for the brands,” he added.

Having said that, Sen added that social media behaviour is changing amongst the younger audiences in Southeast Asia leading to brands realising the importance of keeping track of the one-to-one engagements with consumers. This includes the touchpoints across bought, owned and earned media.

“A people-based and human-centered approach to marketing is key, where there is less of a focus on ecosystems and more on consumer journeys,” Sen said.

The Ministry of Health’s has appointed an agency for its Community Healthcare Assist Scheme...

AKA aims to define the brand’s narrative and drive a meaningful brand story in Singapore through compelling content, targeted at a..

BPA Worldwide has expelled AP Energy Business Publications claiming non-payment but the publisher says it gave up the membership o..