PUMA has unveiled an interactive IG filter where shaking your head will enable you to create your own EDM track. This comes in line with a regional campaign running on social titled "Foot Tapping" and the campaign targets consumers across Singapore, Malaysia, and Indonesia. Working with agency UltraSuperNew Singapore, the campaign is launched to raise awareness of its restyled PUMA Mirage Tech sneaker, and is fronted by a 60-second film with Singaporean actor and musician Tosh Rock. Creating the base beats are also music producers Inquisitive (Singapore), Yusef Kifah (Malaysia) and DJ Kild (Indonesia).

The campaign film features a music video done through foot-tapping (a term coined by PUMA for the creation of music through the tapping of feet). Tosh Rock is seen dancing in the new PUMA Mirage Tech sneaker, with each movement generating audio stems that are layered to create a brand new electronic dance music (EDM) track. His movements are also captured and tracked with a Kinect camera to create neon visual elements. The film will sit on social channels, online, and be played in-store. UltraSuperNew worked with Mischief Makers, an experiential design and production lab, to bring the idea to life.

Besides raising awareness of its restyled Mirage Tech sneakers, PUMA's campaign also aims to bring back EDM festivals that are unavailable currently due to the pandemic. A spokesperson from UltraSuperNew said the campaign's main target audiences are males aged 20 to 30, as well as EDM festivals goers. 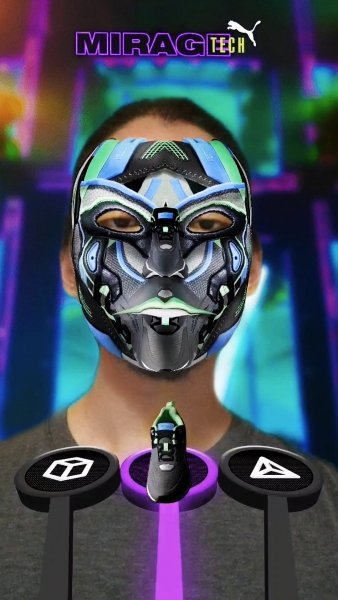 Eleanor Wang, head of marketing for PUMA SEA said: “In the absence of live music in clubs, and festivals we can only reminisce about for now, we wanted to experiment with an innovative way of bringing the spirit of EDM to the Mirage Tech. Working with Tosh Rock and DJs across Southeast Asia let us do just that.”

Daphne Tann, associate creative director at UltraSuperNew added that the agency's ambition was to break down EDM and individually connect the dots between the elements - electronics, dance and music. "We didn't have to look far for a solution, inspired by the 'tech' in Mirage Tech. The end result is a campaign that gives a different meaning to foot tapping," Tann added.

PUMA is no stranger when it comes to campaigns with a virtual twist. Last year, to promote its Future Rider sneakers, PUMA brought onboard virtual influencer Maya as one of its Southeast Asia brand ambassadors. Alongside its other human influencers, Maya aided in the campaign by updating her collaborations with the sportswear brand and also group selfies with the team. Separately in September 2020,

PUMA launched a customised AR face filter, transforming each Instagram user into "PUMAN" for its #PUMANSOFSG campaign. The campaign makes a tongue-in-cheek reference from the Humans of New York movement and sees the sports brand partnering with six influencers, including actors, comedians, a national footballer and a KPOP dancer. Fans were also encouraged to submit Instagram stories with these PUMAN filters and the campaign hashtag to get a discount off PUMA's latest products at its physical retail stores.

MARKETING-INTERACTIVE's Content 360 Week is back from 6 to 8 April this year! Super charge your content production, distribution and monetisation strategies by learning from brands such as NBA Asia, P&G, Malaysia Airlines, and Marriott International, among others. Sign up today!