YouTube has come out on top as not only the most talked about brand online, but also a brand that is widely loved by consumers.

According to the NetBase Industry Report 2018 - Media and Entertainment, which measured brand performance from 1 April 2017 to 1 April 2018 across popular brands within sports, streaming, TV networks and digital media, YouTube has a net sentiment of 44 out of 100 and a brand passion index (BPI) of 48 out of 100. 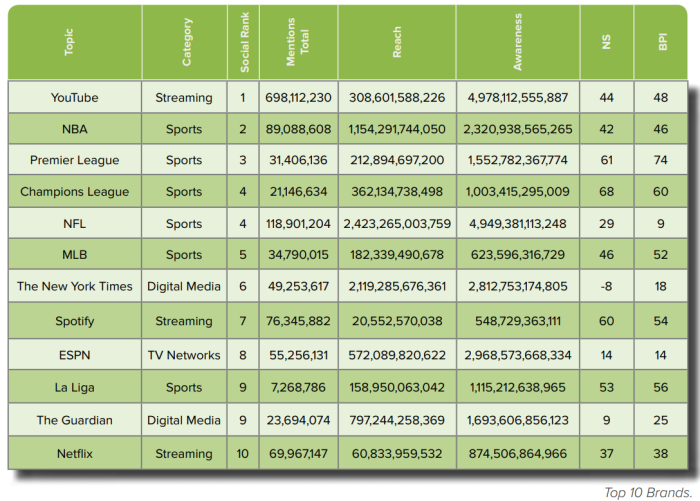 NetBase said streaming brands are more widely distributed across the axes of net sentiment and brand passion, as compared to other categories. This trend indicates that there is plenty of room in the category to work on building engagement and passion for streaming brands.

Meanwhile, the top five ranking is dominated by sports brands, with the National Basketball Association (NBA) coming in second. The NBA has 89,088,608 mentions and a net sentiment of 42 and a BPI of 46. The Premier League and Champions League were ranked third and fourth respectively.

Despite YouTube being widely talked about and loved, it was still outranked by the two sports brands in terms of net sentiment and BPI. The Premier League had a net sentiment of 61 and a BPI of 74, while the Champions League had a net sentiment of 68 and BPI of 60. The top 10 brands accounted for 64% of all mentions in the report, and according to NetBase, this indicates that smaller brands have a hard time cutting through and getting in the conversation, especially for media and entertainment brands that are not a sports brand.

Despite an exciting year, digital media brands only formed 9% of the total conversation for media and entertainment brands on this year's list. The New York Times and The Guardian were ranked sixth and ninth respectively, with the bulk of the rest of the brands including The Washington Post, Teen Vogue and The Wall Street Journal, being ranked among the top half of brands.

NetBase said that although the brands only represent a small amount of the share of voice, they are "certainly" on the top of mind with social users. Meanwhile, digital media brands such as Teen Vogue and GQ also got political over the past year and the move was popular among social media users. Despite covering divisive issues, Teen Vogue and GQ were the most loved digital media brands among consumers. Teen Vogue had a net sentiment of 62 and BPI of 60, while GQ had a net sentiment of 48 and BPI of 60.