After looking over 50 million users who have listened to a whopping 70 billion hours’ worth of music, Spotify found that Ed Sheeran is the most streamed artist for this year.

The UK singer songwriter was listened to over 860 million times this year on Spotify globally. In addition, Sheeran boasts of having the most streamed album for” x”, with over 430 million streams since it was released in June.

The most streamed female artist on Spotify was Katy Perry, taking the crown from Rihanna who held the title for the last two years. Meanwhile, Pharrell Williams and his pop anthem Happy is the most streamed track in the world in 2014 on Spotify, with over 260 million plays.

Without citing figures, iconic Filipino rock band Eraserheads hold the title for the most streamed OPM artist in 2014. The band made a short comeback with the release of two new songs after more than a decade — "Sabado" and "1995" —as part of the September issue of Esquire Philippines.

On the band’s heels are M.Y.M.P., short for Make Your Momma Proud and homegrown pop star Sarah Geronimo in second and third place, respectively. Angeline Quinto places fourth, while Yeng Constantino, who recently launched her newest album All About Love on Spotify through an exclusive pre-stream, completes the top five.

10th October was officially the loudest day of 2014 on Spotify with the most rock and metal played than any other day, while 30th May was the happiest day, with the biggest number of playlists titled ‘happy’ being streamed on repeat.

More than 733 million playlists have been created on Spotify this year, with ‘Today’s Top Hits’ being the most popular with over 2.3 million followers.

“2014 has been a fantastic year for music fans with a vibrant mix of Asian and global artists topping the end-of-year Spotify charts," said Sunita Kaur, Managing Director (Asia), Spotify. “Spotify's Year in Music is a great way for music fans to look back on their favourite tunes of the year and discover new tracks and playlists."

Here’s the list of some of Spotify’s key global figures for 2014. 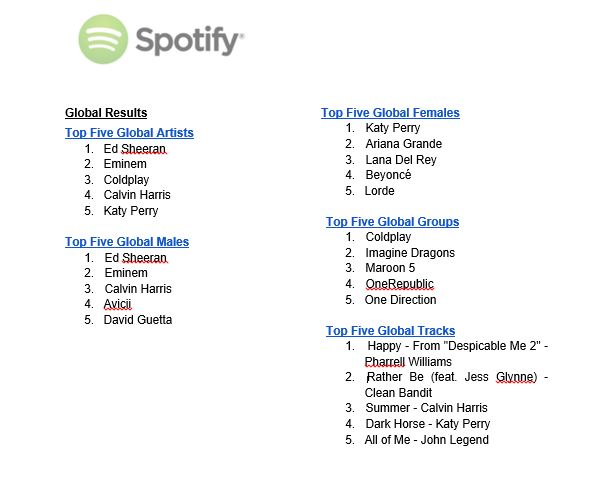 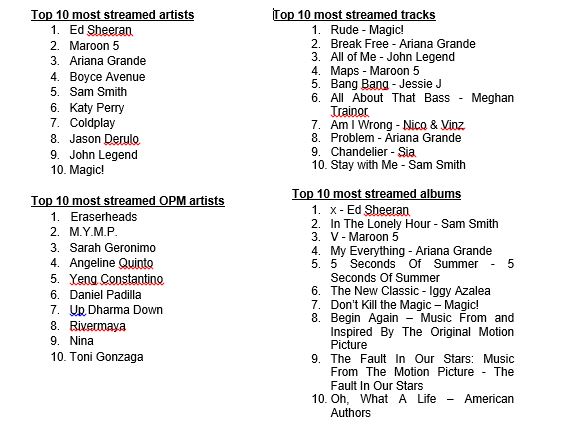