The Ministry of Manpower (MOM) has revealed that top PMET (professionals, managers, executives and technicians) job openings in 2017 included marketing and sales roles such as commercial and marketing sales executives, and sales and marketing manager.

The top three hiring industries for commercial and marketing sales executives were wholesale and Retail Trade (30.8%), financial and insurance services (12.9%) and community, social and personal services (11.8%). Meanwhile, the gross wage that establishments were prepared to pay was between SG$2,800 to SG$4,000, usually requiring diploma and professional qualification.

For sales and marketing managers, the top three hiring industries were wholesale and retail trade (25.4%), financial and insurance services (18.8%) and information and Communications (13.9%). Meanwhile, the gross wage that establishments were prepared to pay was between SG$5,500 to SG$8,000, usually requiring degree and above qualification.

Taking the top spot were occupations such as software, web and multimedia developers, followed by teaching and training professionals which took the second spot. According to MOM, the top PMET job openings were more commonly seen in PMET-dominated sectors such as public administration and education, financial services, professional services and information and communications.

Here is the full ranking: 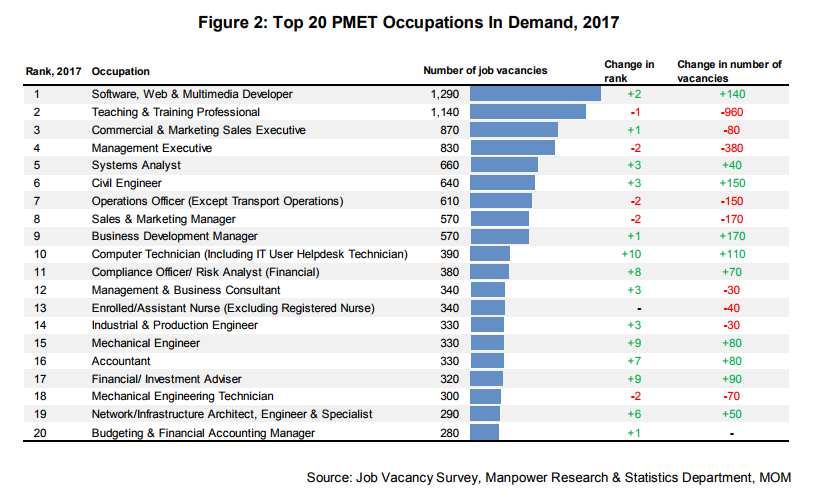 The report added that academic qualifications were not the main consideration for filling 42% of PMET vacancies, as they typically required working experience. These vacancies included commercial and marketing sales executive positions as well, along with others such as civil engineers and software, web and multimedia developers.

The MOM Job Vacancies Survey is released by the Manpower Research and Statistics Department every quarter. This includes data on the trend in the number of job vacancies by broad industry and occupation, and compares the number of vacancies to the pool of unemployed persons in its quarterly Labour Market Reports.

This report also identifies openings that are vacant for at least six months and those which employers report hard to fill by locals. Data is collected through an annual Job Vacancy Survey on private establishments (each with at least 25 employees) and the public sector, pertaining to positions unfilled as at 30 September each year.