By 2020, more than three-quarters of all online display advertising revenue will come from mobile, according to new analysis by IHS Markit. 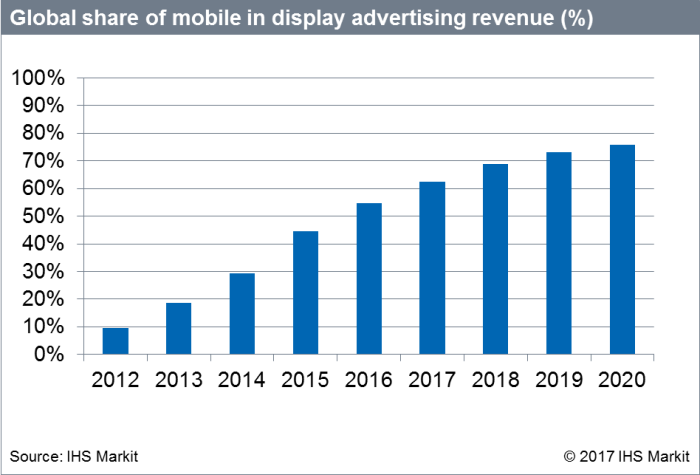 In 2016, worldwide mobile advertising will grow 42%, to $41 billion and for the first time will generate more than half (55%) of all online display advertising revenue, said the latest IHS Markit white paper.

“Mobile advertising has grown stronger than any other medium in the last four years, and now accounts for a significant proportion of online advertising revenue,” said Qingzhen Chen, senior analyst at IHS Markit.

“In 2016, the Chinese online ad market went through some turbulence and reshuffling,” Chen said. “China introduced its first set of online advertising regulations, which in the short term had reduced online advertising revenue, but in the long term, we expect to see a more sustainable online ad ecosystem from this development.”

On the other hand, after a period of rapid growth, TV has entered a third year of consecutive decline with a single-digit contraction. Many people are switching to online for content consumption and seeking wider range of content, from foreign content to user-generated content by popular vloggers. TV in China declined 2.7% in 2016, and IHS Markit expects a 3% drop in 2017. 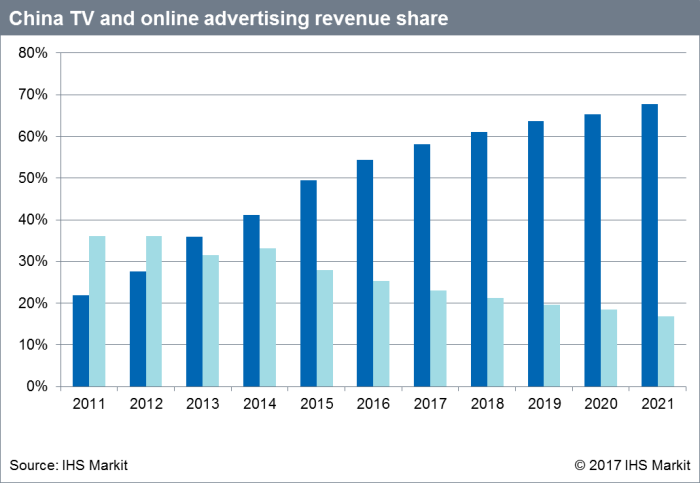 Baidu, Alibaba and Tencent own 36.5% of the total ad market with a total of RMB160 billion ($24 billion) in 2016. “The trio has absorbed large TV brand budgets and online ad budgets, and continues to expand aggressively into digital,” Chen said.

The trio made a total of 262 investments, 27 acquisitions and one joint venture between 2009 and 2016. Mobile app companies received most investments from the trio for that period.

“As Chinese companies go global, investments in nearby countries will increase,” Chen said. “Regions like Southeast Asia are benefiting from the rise of a middle class, consumerism, and a mobile-first young population. The emerging Asian markets present a huge business opportunity for the trio to export its video content, games and e-commerce abroad.”