Nearly half of millennials (47%) believe CEOs have a responsibility to speak up about issues that are important to society, far outpacing the sentiments of Gen Xers and Boomers (28% each).

An even larger six in 10 millennials (56%) say that business leaders have a greater responsibility to speak out now than in years past. 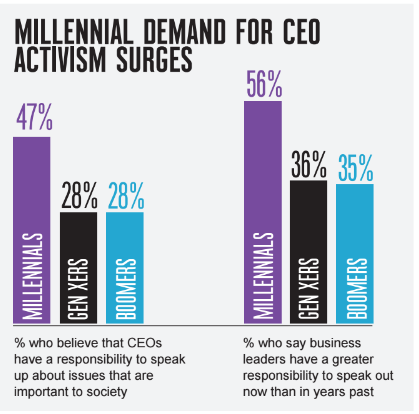 This is according to CEO Activism in 2017: High Noon in the C-Suite, a report commissioned by Weber Shandwick in partnership with KRC Research.

“When dozens of CEOs spoke up about the new administration’s decisions regarding issues like climate change and travel to the US from select countries, for example, social media ignited, protests erupted and media attention exploded. Navigating how to communicate a company’s point of view in this environment is becoming increasingly complex and important. Future generations will only pay closer attention to how companies communicate around their values when it comes to deciding where to work or who to purchase from,” said Andy Polansky, CEO of Weber Shandwick.

CEO activism positively affects millennials’ purchase decisions, according to the survey. Half of millennials (51%) say they would be more likely to buy from a company led by a CEO who speaks out on an issue they agree with. This rate has increased since 2016 (46%). This form of “voting by wallet” is not to be ignored as companies fiercely compete for customers. By comparison, CEO activism is less likely to affect the purchase decisions of Gen Xers and Boomers. 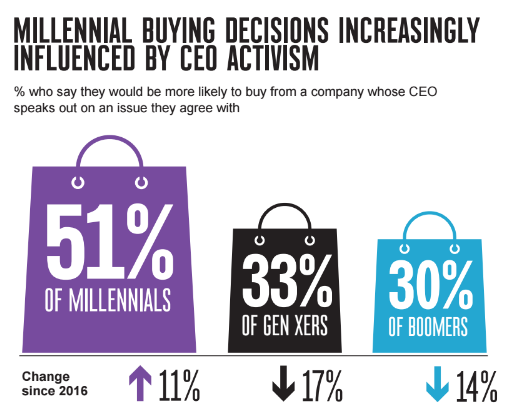 The risk of silence

This survey also asked consumers what they think the risks are of not speaking out. Half of Americans (47%) believe the biggest risk of a CEO not speaking out on a hotly debated issue is some form of criticism, whether it comes from the media (30%), customers (26%), employees (21%) or the government (9%). Top perceived risks do not differ by generation.

“For companies looking to increase sales, recruitment, innovation and word of mouth, millennials’ bias toward CEO activism should not be overlooked. This generation is heavily purpose-driven and is already changing the game when it comes to how we work and where people want to work,” said Leslie Gaines-Ross, chief reputation strategist of Weber Shandwick.