DDB Group Hong Kong's CEO Andreas Krasser started off as a research assistant at Innocean's brand strategy team, where he garnered experience with proprietary tools and frameworks to define and measure brand equity for clients. Over the years, as he rose the ranks, Krasser harnessed the belief that communication and openness is key in management.

With this view in mind, he has been implementing initiatives specifically aimed at transparency and management accountability - especially when he took over the CEO title at DDB three years ago. The measures taken include monthly town hall gatherings to update the entire agency about current happenings, as well as an open-door policy, enabling any staff member to drop by his or any other management team member’s room for a chat at any given time.

When asked what he'd be doing, if not in advertising, Krasser says he'd be in academia where he’d probably still be writing his doctoral thesis. He is also a published author in the field of cross-cultural consumer research.

More here on what drives Krasser.

MARKETING-INTERACTIVE: What was your first job?

Both my parents worked blue collar jobs and wanted me to appreciate the value of money at an early age. So, from the age of 16 I began to work various odd jobs, some of which included: baggage handler at the airport, administrative help for the state government of my home state in Austria, shift worker at the post office, student counselor, hidden camera reporter, and even guinea pig for a pollen allergy drug (I was a student and urgently had to pay the rent). While none of the above specifically prepared me for a career in advertising, all of it shaped my work ethic and my perception of what it means to work for a living.

MARKETING-INTERACTIVE: What was your first role in advertising?

My first real advertising job was during my graduate school days in Korea, when I joined the brand strategy team at Innocean, as research assistant. Our team was working on developing proprietary tools and frameworks to define and measure brand equity for our clients. This was the beginning of my obsession with strategy tools.

MARKETING-INTERACTIVE: What was your first impression of advertising?

For as long as I can remember, I have always wanted to work in advertising. As a small kid I would sit in front of my parents’ TV, anticipating the ad breaks on cable television because I loved playing speed-guess the brands. Moreover, I was fascinated by how you could tell engaging stories in such a short timeframe.

When I finally did end up in advertising, it was like a dream come true – as cheesy as this might sound.

MARKETING-INTERACTIVE: Who was the mentor who influenced you the most and how?

It’s really difficult to boil it down to just one person - I was lucky enough to have had (and still have) many mentors around me, who all had a significant, yet different sort of influence on me and my career. Back in Korea, Peta Bellamy took a chance on me, and people like David Meister and Craig Lonnee took me under their wing. Later, Peter Rodenbeck not only helped me to make the move to Hong Kong, but also always offered great professional and personal advice (he still does).

Randy Lai of McDonald’s, more than a client, has also become a mentor in regard to leadership, and my boss, David Tang has shaped my view on the essence of running an agency.

Last, but certainly not the least, there is Tony Harris, not only a dear friend, but also my go-to counsel whenever I’m stuck or once again feel like an imposter.

MARKETING-INTERACTIVE: What's the harshest criticism you've received and how did you cope with it?

Ray Kroc once said that taking care of your people means that business will take care of itself. While I wholeheartedly believe in this principle, it is not easy to always practice – especially during financially taxing times. And I had to learn this the hard way: given the pressures of the pandemic, I had pushed our people way too hard, while being understaffed, to meet with new wins and client demands. And that’s exactly what our people told me about a year and a half ago when they gave us the lowest employee engagement score in over ten years (at DDB, we conduct employee engagement surveys on a bi-annual basis, which allows us to track how satisfied our people are with the agency’s working environment.)

After a few sleepless nights, I started to look at the survey result as a much-needed wake-up call, and collaboratively with my management team, implemented a three-legged turnaround plan focused on (1) fixing the basics, (2) optimising structures and processes, and (3) creating a mindset change.

Within a year, we managed to increase our engagement score by 15%, one of our best results ever.

MARKETING-INTERACTIVE: Describe your own management style now as a leader

When it comes to management, I believe in communication and openness.

So, taking over as agency head three years ago, it was very important for me to implement initiatives specifically aimed at transparency and management accountability. Monthly town hall gatherings, for example, were already a way to update the entire agency about current happenings, but I tried to give them a more transparent spin: instead of only sharing good news, we now also share the more difficult news, such as lost pitches, turning them into learning experiences for the wider group, or financial performance of the company, providing everyone with an earnest assessment about what shape the agency is in.

We also have an open-door policy, enabling any staff member to drop by my or any other management team member’s room for a chat at any given time. And under the premise that it’s better to tell someone something they already know rather than not telling them something they needed to hear, I further send out a regular ‘Reply All’ mail to the entire agency, sometimes containing more serious agency news, and sometimes lighter reading, such as case studies, or other ramblings of mine. MARKETING-INTERACTIVE: What's one thing you wished employees understood about being a leader?

When I attended Omnicom University back in 2017, I read an extremely simple, yet highly meaningful quote by TBWA New York Group’s Rob Schwartz that stuck with me until now: “It’s how you show up.” When sitting in the proverbial big seat, people will not only look for your leadership, but they will also always interpret your actions as well as inactions in a certain way.

Every encounter, every facial expression sends a signal that can be over or misinterpreted. As a naturally optimistic person, this message resonated with me, so I also decided to do my best, every single day, to show up positive and hopeful, which is probably even more important during times of crisis. However, even the most optimistic person can have a bad day once in a while, and I’d like my people to know that sometimes, when my enthusiasm for the work isn’t at its usual level, I am probably just having one of those days.

MARKETING-INTERACTIVE: What do you do during your free time?

I try to stay as fit as possible doing CrossFit and a little bit of Olympic Weightlifting. When travelling in and out of Hong Kong was still a thing, I’d also go snowboarding and skiing as often as I could. Most importantly though, I do my best to spend as much time as possible with my daughter – soon enough, she’ll probably be too old, or me not cool enough for that. In other respects, I have many side projects that I’d like to pursue but are mostly on hold because I usually just fall asleep on the couch most nights, watching Netflix with a glass of Negroni in my hand. MARKETING-INTERACTIVE: Where do you find your inspiration?

Given everything that went down the past couple of years, I personally found it quite challenging to find inspiration at times. The one person however, that always has and is able to give me a boost is my daughter.

For example, at the onset of the pandemic, we started a series of arts & crafts YouTube videos which allowed me to witness how much joy she gets from creating things and figuring stuff out. So, in the spirit of Picasso’s quote that every child is an artist and the problem being to remain one once we grow up, I turn to my seven-year-old for inspiration. 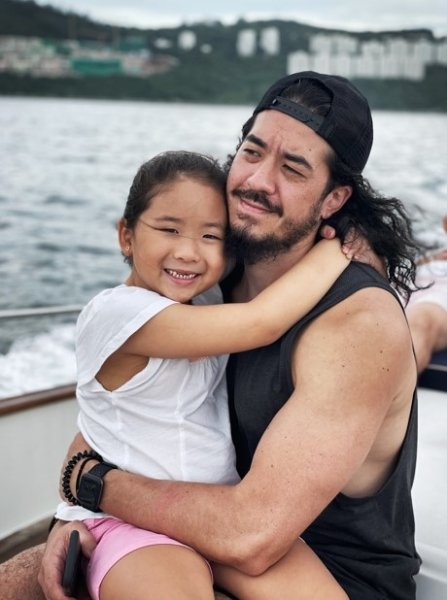 MARKETING-INTERACTIVE: If not in advertising, where would you be?

Like I mentioned before, working in advertising was always my dream job. However, I did consider a career in journalism early on (I majored in journalism during my undergraduate studies), which after a short stint at a local newspaper in Austria, turned out to not really be my thing. After finishing my Master’s though, I seriously thought of enrolling in a PhD program, ultimately pursuing a future in academia. So, if not in advertising, I’d probably still be writing my doctoral thesis.

MARKETING-INTERACTIVE: What advice do you have for someone looking to start a career in the industry?

Don’t compare yourself to others. I know that many juniors in Hong Kong agencies are openly discussing and sharing their salaries with their peers. I’m assuming it’s a way to get a benchmark, but ultimately, I believe it leads to unhealthy comparison. While job titles and even job descriptions might be the same, it does not mean that each individual’s contribution to their respective agencies’ businesses is the same.

Unhealthy comparison can also happen in regard to career trajectory. Generally speaking, I’d say have a plan, stick to it, and focus on your own shit. You never know what other circumstances might have led to someone else’s promotion, and most probably it’s out of your control anyways.

So, rather than wasting precious energy on envying someone else’s path, spend it on something you can actually control: yourself and your work.

MARKETING-INTERACTIVE: What issue would you like to see the industry change in 2022?

I sincerely hope the industry at large can come together to address our talent issue. Rather than taking the time to properly mentor our people, we too often go for the quick fix with salary or title inflations. Rather than helping our people to see the value of a long-term career path within our industry, we try to sway them with short-term perks. So, in order to resolve this crisis, I believe we have to shift our focus to dedicated mentorship, proper growth planning, and most importantly, creating environments that don’t interfere with our people’s wellbeing.

We don’t need to try so hard to be more like the Googles of this world, no, instead we need to be more confident in who we are and what we do, while radically reappraising the basics.

This needs to happen for each agency individually, but also requires a coordinated effort across agencies, as well as our clients.