A DDB stalwart, and chairman and CEO of DDB Group Asia Pacific, John Zeigler tells Rayana Pandey how he got into the industry, and rants about the one question clients need to ask their agencies, but never do.

Tell us about your first job.

My first job was at a manufacturing company called Nicholas Kiwi and they made boot polish, and Kitten car polishes, and bleaches. I was a trainee and the traineeship was for three years. Yes, I was the only person ever to finish the traineeship.

How did advertising happen?

From Nicholas Kiwi, I went to a company called Carnation which made cat and dog food, among other products. It was a great marketing experience because you had to think through a third person (the pet owner).

Later I worked at Campbell’s Soup, where we made canned soups and frozen foods and fried chicken. I then joined another pet food brand Nabisco Brands and realised I had learnt just about everything about packaged goods in the client world. I was then doing a bit of part-time work for some people, helping a plumber fix some of the problems in his business. I came up with some really interesting ideas to help him build his business, which he did very successfully. In fact, he invented the sensor tap, which was the first tap where you don’t have to touch the tap, and we took that into hand dryers and similar products almost 30 years ago.

That made me interested in doing my own thing, so I concluded with another friend that maybe we should start our own agency.

Tell us more about the agency.

It was called Kuchinsky and Ziegler. We knew, of course, that nobody would be able to remember those names, so we had a great little logo with two owls, and everyone always said: “Why are there two owls? They look really kind of wise and smart and intelligent.” We said: “Exactly”.

Our logo communicated that we were a much more sophisticated business than we were as two young marketers. We started the business with A$2000 and built it up over six years to have over 70 full-time people, and 360-odd contractors.

In the process of solving clients’ problems, we built the country’s first ever national merchandising and field force, which is now a huge business through most agencies and groups, so we were the first to do that, and we did a lot of work for our first client, Unilever, who was trying to get soup into the mouths of the masses.

Six years later, we really wanted to grow the business, so we started talking to two agencies, DDB and BBDO, because we’d used both of those agencies as clients, and we liked them.

The agency eventually was bought out by DDB.

Well it’s interesting because I thought about that and it sort of depends in which way. One of them could have been John – can you stop standing on your head to win business. Because I remember once we were pitching for M1 here in the early days and we thought we had to do something because we’re very small and it was going to be very hard, so we had to do things that made us stand out. So when we did the presentation on video for the pitch I got up, stood on my head on the boardroom table and I finished the presentation by saying: “You can see that we will do anything, including stand on our heads, to win this business.”

The other craziest thing my people have ever said to me is, you’re too patient, you’re too forgiving, and you could be more direct and aggressive.

Did you ever think you would become a CEO of an agency?

No. You know, and this might seem a bit odd, but I don’t actually see myself as a CEO now. I know I am, but I suppose at heart, the one thing I love is people proving me wrong.

I’m probably more of a conciliatory supporter than I am a traditional CEO. If anyone needs any boxes packed, I’m there – more hands are better.

And I think I’ve got that from my upbringing. There’s never been a pretentiousness or an ego that I’ve had to live up to, so no I never thought about becoming a CEO, it just kind of happened when I hung on longer than everyone else.

I’m an inventor, so I’m always looking at what isn’t being done more than what is being done. I always look to create, I see things as they could be, not as they are. And that leads to my hobbies too.

Well, I do up old cars, so I find cars that no one else wants and I turn them into things that are beautiful or could be very different. At the last count, I had 13, but I’ve sold a couple so I think I’ve got 11. 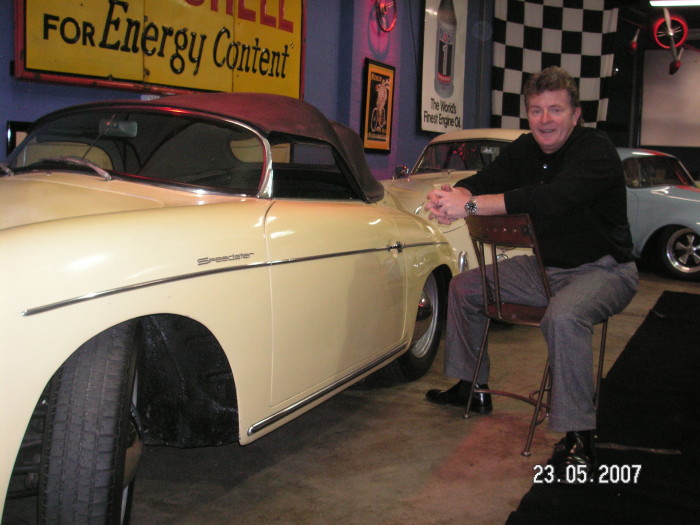 What’s the one thing you absolutely hate about this industry?

The fact that we have existed for so long and allowed our valued contribution to clients to demise because we have not built a value equation which relates to the way that business can evaluate what we do.

And I think if you look at the evolution of the industry, that is, before the industrial revolution, you had very few products and services so the world was a different place.

After the industrial revolution, all of a sudden, you started to have a huge array of choices. In the past, creativity was important to get noticed; today it’s important to make a differentiated decision. I think it’s unfortunate that as clients are entering that area where the biggest single impact on their demand is going to be driven by the creative, they should at least able to understand what creatives can do for their business.

Also, the one question that clients should ask, but they never do.

How much time from the senior management and the most skilled people in the agency will I get when I choose my agency? I’ve never been asked that.

Some of that used to happen, but now the question has moved because of the influence of procurement and cost being the driver. Now clients think we don’t pay for senior management, they’re considered overheads. So it’s a double-edged sword.

If I was back on the client side and I was looking for an agency, I would come in and say OK, I know who’s most creative because I can see who they are and which clients they have, so I know the short-list of who I want to talk to. I can get an idea of the personality of those people with a one-hour call or a meeting with them. And then my third question would be how much of your time is going to be focused on working on my business. On helping me strategically invent and make my business more successful.

How StarHub broke its ‘cold and robotic’ image on social media

Yuen said the telco "let go" of its social media agency and built an in-house social team as part of the plan...

The nation’s leading employability solutions company hired the agency for its media duties...

Yeung adds some fun to Kiehl’s

With marketing increasingly driving sales, it is vital that marketing departments learn to speak the languages sales is speaking. ..