McDonald’s sees rise in brand perception for bringing back McGriddles

Fast food giant McDonald’s has seen a rise in public perception of the brand since it unveiled the return of McGriddles last month. To tease consumers before the official launch of McGriddles, McDonaldŌĆÖs created a marketing campaign with Leo Burnett Singapore, which┬Āit recently partnered.

In a statement to┬ĀMarketing┬Āpreviously, a McDonaldŌĆÖs spokesperson said the seasonal breakfast item┬Āwas requested by customers since its removal from the menu and that the campaign will be┬Āmarketed via┬ĀATL, OOH, in-store, digital and social platforms and executions. The sale of McGriddles was also in limited quantity, as the fast food giant also sold┬Āexclusive merchandise.

Despite the limited availability, McDonaldŌĆÖs satisfaction score, which measures whether people were satisfied customers of a brand, rose from a 41.9 on the day of the announcement to 49.2 on 17 March, a jump of +7.3 points in three weeks. 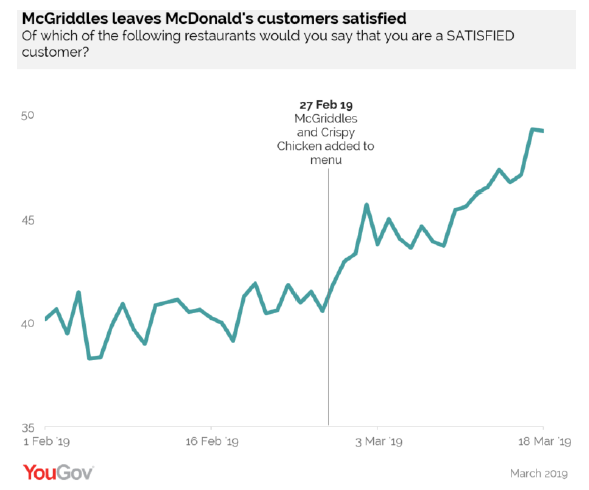 Alongside the McGriddles, McDonaldŌĆÖs also recently introduced crispy chicken to its menu for a limited time only. The introduction of the limited edition fried chicken followed an increase of customers at McDonaldŌĆÖs, according to YouGov’s statistics. On the day of the announcement, McDonaldŌĆÖs current customer score was at 53.9. As of today, it sits at 58.5, indicating an increase of +4.6 points. 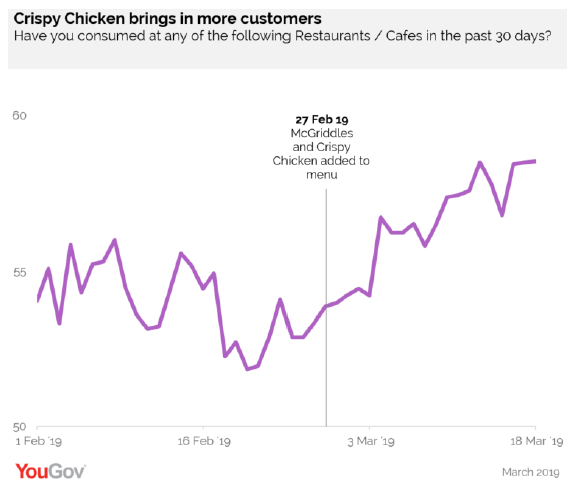 Other metrics have also performed well since the new editions to the menu. The brandŌĆÖs buzz score (which measures whether people have heard anything positive or negative about the brand over the past two weeks) have risen from 21.5 to 33.1 (an increase of +11.6 points). McDonaldŌĆÖs recommend score (which measure how many people would recommend the brand) also rose from 23.5 to 32.7, indicating a rise of 9.2 points.

Ervin Ha, YouGov APAC head of data products said for a brand that generally enjoys stable brand metric scores, itŌĆÖs “interesting” to see such a spike. “The introduction of these two new items to the menu appears to have Singaporean consumers hungry for more, and the novelty doesnŌĆÖt seem to be wearing off. Other QSR brands should take note, of how something as simple as a menu addition could sway brand health,” he added.

Early this year,┬ĀMcDonaldŌĆÖs launched┬Āa year-long campaign┬Āto celebrate its 40th anniversary since the restaurant chain opened its first location at Liat Towers in 1979. With over 130 restaurants across the country, the campaign titled┬ĀŌĆśCome home to McDonaldŌĆÖsŌĆÖ, reflects on four decades of creating memories in Singapore. The campaign is centred around a 60-second spot featured on FTA, cable, cinema and digital platforms. Launched on 1 January, the film is supported in print with other activation planned throughout the year.

Cultural stereotypes, implicit biases and representation in media work together to further this issue, said the makers of Barbie. ..

Following in the footsteps of LinkedIn and Facebook, Google is selling user endorsements to marketers with its new ad feature. ..

Mars product recall: When your trust is at stake

Moving fast is the surest way to tackle a crisis and when it concerns your product, recall is one of the first things brands resor..