A CCTV footage published on YouTube on 10 November 2013 has amassed an avalanche of comments from the public, commending the starring female of her brave deed.

“Starring” is the key word.

The video sees white gates open in a pretty prestige neighbourhood and a black Toyota pull in. As the gates are closing, two people on motorcycles pull a quick U-turn; one alights and slips into the driveway of the private property before the gate full closes. He grabs hold of the female bag and she struggles against his pull, holding onto her bag for dear life.

Then in a quick turn of events, she sends her knee straight into his stomach – twice – before flinging him to the ground, proceeding to pounce on him with high-levelled punches. After the third hit, the other guy on the motorcycle runs into the drive way with a parang – one can only assume the culprit to be screaming threats her way – before she quickly runs off and take shelter behind the covered barbeque grill.

The attempt bandits skip off the property, without so much as picking up the bag they were after and rides off. The video ends after a full minute with the victim entering her house.

Commenters also took to the MCAC’s Facebook to share props and applause of the girl’s bravery – insomuch as asking the girl’s hand in marriage for being a ‘bad ass’. 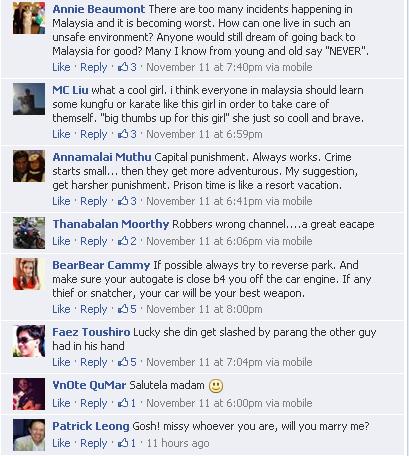 After 24 hours, spectators started to question the authenticity of the video to which the MCAC diverted from answering. 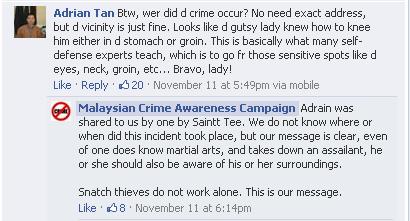 This morning, the Malaysian Crime Awareness Campaign announced that the video is, in fact, a “re-enactment for educational purposes,” with an added footnote statement:

This video is for learning purposes only. It is a reenactment of a scenario where a woman may get robbed as she parks and get out of her car.

Quickly following, MCAC redirected the objective for supporting the video as to remind residents to close their auto-gate before exiting their vehicles.

However, MCAC’s negligence of checking the video’s origin and authenticity has reflected poorly of its credibility as a direct source to crime awareness. 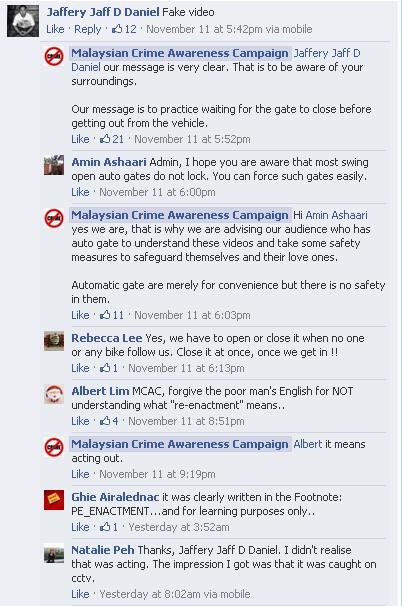 Prior to the exposure, MCAC applauded the starring female for her defence, stating:

Kudos to the gutsy lady who fought off the snatch thieves. It really took guts to bring down one suspect, however, please do take note snatch theft always works in pairs. Our message is to be aware of your surroundings. Also take note that these thieves can be armed either with knives or machetes.

Just hours ago, it released another stance via a new boost post of the same video on its Facebook:

The rising crime rate has been main concern for Malaysians and tourists on holiday in the country. These events happen in real life and a faux video encouraging average females who don’t know the different between a left hook and a kick in the groin will only influence them to put themselves in a position of danger.

The girl was commended for her bravery; the snatch thieves were punished by shame.

Criminals do not ask for permission or assess an environment to be ‘safe’ for crime.

The MCAC’s good intent on delivering up-to-date and relevant criminal news has backfired in this instance; first for not checking its sources and second for switching objectives from championing face-to-face combat in a dangerous situation to closing auto-gate and finally to discouraging self-defence.

The viral video, credited to MaxMan.tv, first published from the Malaysia Chronicle (an online news portal) that later found its way to the Malaysian Crime Awareness Campaign to garner over a quarter of a million views with over 4,200 shares on Facebook after the MCAC shared it on its Facebook.

“No TV Day” plans for second wave of action

Off the tracks, Mercedes and Ferrari still win big in Netflix’s F1 series

Industry players weigh in on the X factor that Ferrari and Mercedes possess that allows them to retain top share of voice...

New Zealand - Christchurch and Canterbury Tourism has launched a campaign to lure back tourists from Australia. ..

He will oversee the creative core of client partnerships. More here. ..

Sam Holt has been promoted to Vice President of Performics China with immediate effect...