Small businesses were badly impacted by the Movement Control Order (MCO) implemented last year. Having worked with multiple SMEs on its platform, Grab knew it had to play an important role in helping these businesses stay afloat. However, not all of them might be familiar with advertising and digital marketing. Knowing the challenges SMEs faced, Grab took matters into its own hands and worked with Kingdom Digital to create an automatic ad builder for SMEs so they would not have to worry about being able to write effective copy.

As a result, the team won gold for Most Effective Use – Specific Audience at A+M's MARKies Awards Malaysia 2021 for its Enterprise-level Ad-Tech for the Smallest of Small Businesses campaign. Find out how Grab did it.

The MCO resulted in the temporary closure of non-essential businesses and prohibited mass movements nationwide. Within a week, 70% of SMEs reported a 50% drop in business. According to the Entrepreneurship Development and Cooperation Ministry, more than 30,000 Malaysian businesses have folded since MCO was first imposed last March. The majority of the casualties were small single-outlet retailers, restaurants, and other micro-enterprises who struggled to make the transition from physical to online selling.

As a marketplace app that would not exist without its small business partners, Grab had a business motive and a moral duty to help the smaller companies survive and thrive. It wanted to target businesses that earn below RM30,000 a month and were granted tax exemption by the Ministry of Finance. The problem it faced was that small businesses are too small to have an agency or a marketing person. They were also too busy to understand apps, ads, and websites. Most of them also lacked the knowledge and resources to move their business from offline to online.

Grab sought to create a campaign that ensured no small business was left behind. Its goal was to help the littlest of businesses overcome the many hurdles to digitise, survive and thrive. To do so, it sought the help of Kingdom Digital.

Objective one: Digitalisation shortcut designed with the littlest guys in mind

Grab performance marketing had already been tested successfully by a handful of big brands such as McDonald's, Wonda Coffee, Lazada and Maybank, and their ad agencies. But up until June last year, Grab said no small businesses had ever even thought about the Grab app as a marketing awareness and sales channel. The key metric for Grab and Kingdom Digital were to go from zero SMEs in the first 100 SME clients of Grab performance marketing by 31 December 2020.

This resulted in the creation of the Grab Loves local: Enterprise-level adtech for the Smallest of Small Businesses campaign which ran from 15 August to 18 September last year.

Many big companies are donating ad credits to small businesses but how will a 65-year-old wet market stall owner or a one-man shop making nyona kueh, for example, spend those Google and Facebook ad credits if there is no one to explain how digital ads work? Other questions small SMEs face also include how they should write a copy, what size should the banner be and what photo should they use if they don't even have a logo.

According to Grab, these are all legitimate questions faced by the small, local merchants as they tried to pivot their business operations from brick and mortar shops to eCommerce during the MCO.

To genuinely move the needle and impact the livelihoods of these small businesses, Grab knows it had to offer more than free ad credits and instead, an easy digital shortcut for these businesses. This involves an end-to-end performance marketing solution that even the smallest, least savvy of businesses could actually use - media space, custom radius targeting, tailored creative (in all the correct sizes for the different spaces), and ruthlessly simplified analytics.

1. Solve for diversity: There are a variety of products on Grab, from laksa and nasi lemak, pet toys, Chinese herbal medicine, nail salons and boutiques. While some small businesses have websites or an Instagram presence, others only have a Whatsapp number. Meanwhile, others have tasty photos of menu items while others don't even have a logo.

2. Solve for scale: How can Grab solve end-to-end performance marketing for hundreds of businesses and not just a handful?

Grab wanted to leverage its app as the medium to provide small businesses with free ad space. At the same time, it planned to utilise Grab's social media channels such as Facebook, Instagram, and YouTube as well as their website to drive awareness and share heartwarming stories about the local heroes.

With National Day and Malaysia Day taking place, it wanted to appeal to the spirit of patriotism among Malaysians and get them to support these small businesses, whether it's by ordering from them via the Grab app or helping to generate more buzz by sharing the inspirational stories that it will be curating.

To solve for diversity, Grab and Kingdom Digital created a bespoke automated ad builder that required no ad-building effort from the small businesses, regardless of what they made or sold. The ad builder automatically pulled whatever information the small businesses had already submitted to Grab, including merchant name, address, opening and closing times, phone numbers, and any other information including store description, logos and menu items.

On the creative automation front, instead of having static templates, its automated ad builder worked more like legos. It would build ads with whatever bricks of information was available and where information was missing, there were layouts for that too.

The ad builder also had dynamic radius targeting, serving ads to Grab users within a 12km radius from the registered store address and automatically turned on or off only during the stores' operating hours.

To solve for scale, emails describing the Grab Loves Local Heroes programme were sent to all eligible GrabFood, GrabMart, and GrabPay small businesses. Enrolled small businesses received personalised performance marketing creative as well as daily ad exposure on the home screen of the Grab app. For the five-week period leading up to Malaysia Day 2020, the space reserved for big brands such as McDonald's was now used to drive exposure for small businesses to five million Malaysian Grab app users - at no cost to the local heroes. At the same time, Grab also designed nine new gift cards so that the Malaysian public could also do their bid to support local small businesses by sending gift cards to their friends and family.

Some of the most interesting stories Grab and Kingdom Digital received were also featured on Grab's social media platforms as part of the Grab Loves Local Heroes campaign for Malaysia Day. 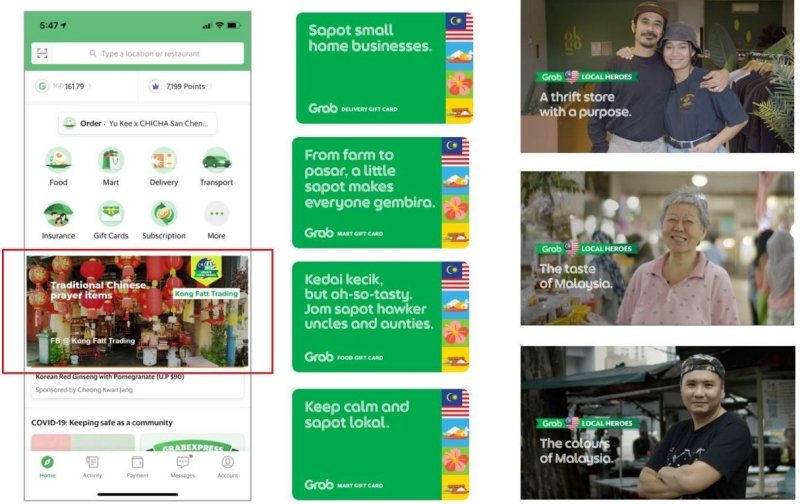 Grab had aimed to go from zero SME clients in the first six months of 2020 to its first 100 SME clients of Grab performance marketing by 31 December 2020. During the campaign, it exceeded this target by five times. It also maxed out available ad inventory on the platform with 500 SME ad campaigns over five weeks. These included 263 GrabFood restaurants, 137 small grocers and kedai runcits, and 100 GrabPay small retailers, 30% of which came from smaller towns outside Klang Valley.