Instead of emoticons and emojis, consumers seem to be leaning towards GIFs and animated stickers to jazz up their daily conversations on messaging platforms or social media posts. They are not only a fun way to remain top of consumers' minds, but also help brands be cheeky and quirky at a low cost. Jumping on this trend was the children education platform, Pants Bear, which turned into a sticker sensation and captured the hearts of judges during MARKETING-INTERACTIVE's MARKies Awards 2021. The brand brought home the gold award for Most Effective Use - Digital and earned finalist positions for both Most Creative and Most Effective social media categories.

According to the new start-up, its vision is to become the new global standard in early childhood content and a brand dedicated to children’s happiness and well-being. Pants Bear was set to premiere its online debut on YouTube in early 2020 after over a year of planning and preparation.

However, the pandemic led to the small budget being cut by half, and the change in YouTube’s COPPA regulation made it a tough start for the new children’s entertainment and education brand.

According to Pants Bear, even with a fraction of the budget left, it managed to gain a following of approximately a million views and 3,000 subscribers on YouTube, in countries such as Singapore, Japan, Malaysia, US, UK and Australia. Even so, the brand said that this was not enough to break the brand through the clutter and new brand boundaries. Pants Bear therefore decided it had to pivot its brand, using social creativity to bring the brand to phones, where consumers spend most of their time.

The brand said that its underlying strategy throughout the initiative was to pivot and expand the brand to encapsulate stickers and GIFs while tapping into the growing mobile messenger use. The brand wanted to reach out to its audiences in new ways and discovered that mobile and messenger use had been steadily increasing, with the pandemic driving more interaction on the messenger platforms.

According to Facebook Analytics, approximately 100 billion messages are sent every day on messenger platforms, with about 63% of people across generations preferring to message over having to email or call. Recent statistics have shown that two out of three shoppers prefer to buy from businesses they can message. The brand said that the increasing mobile and messenger use on top of social media consumption provided key insights that were used to pivot the brand. This hoped to reach not only the Singaporean marketplace but also international audiences.

The brand said that it knew that Pants Bear had a global resonance in entertainment, with global net sentiment of about 80% positive across audience groups through a study it had done.

The brand also added that its characters had the cute factor that broke beyond the parent and child segment and was favoured by teenagers in Japan and the U.S.. According to Pants Bear, it tapped on the insight of increasing chat and messenger use due to the pandemic in order to maximize Pants Bear’s visibility. The brand also said that with the existing limitations on the usual channels, it needed to think outside the box and use a social platform that allowed Pants Bear to gain presence in as many mobile devices as possible.

Pants Bear also said it saw GIPHY and Tenor, online GIF search engines, as leaders in visual expression and creation that make everyday conversations entertaining and give people meaningful and creative ways to express themselves. The brand saw the positivity in how people use GIPHY and Tenor on various social media portals and wanted Pants Bear to share the joy. 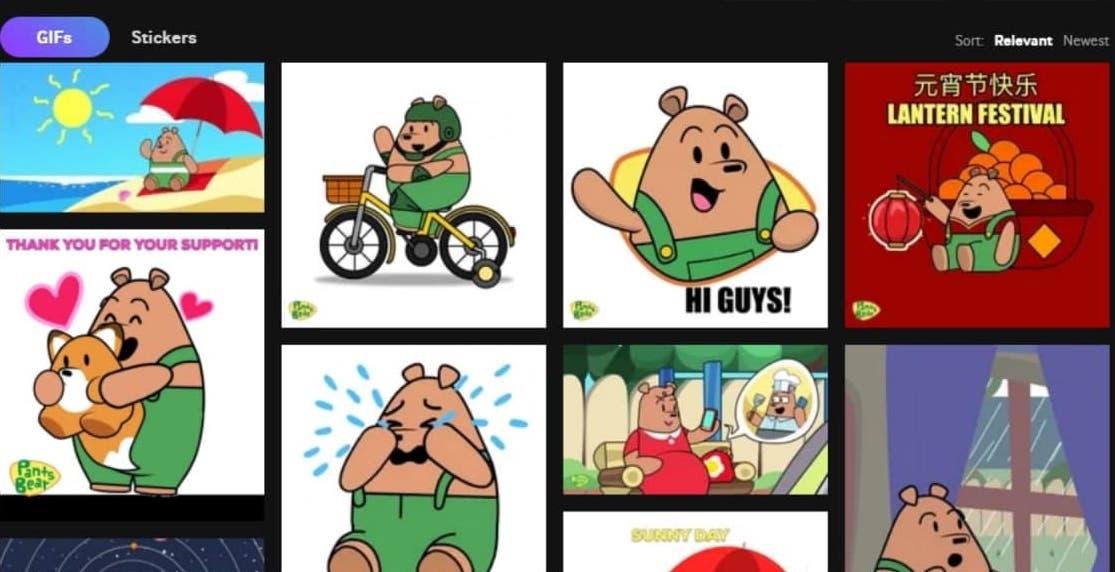 Pants Bear also said that it made every unique sticker and GIF available on messenger platforms and social media. The stickers were then tagged with trending keywords used by the global GIF user base from GIPHY. The stickers were contextualised based on the different reactions and moments the brand wanted to capture.

According to the brand, keyword optimisation and tagging were used to get GIFs trending and relevant stickers in the hands of the people who wanted to use them the most. The brand also conducted daily research on current trends and popular GIFs to ensure Pants Bear would be within the first five results for any given situation, "incepting" their communications.

The brand said that one of its stickers garnered approximately 30 million views in less than a day and another trending from Singapore to Stockholm within two days. The brand also added that Pants Bear GIFs were trending on GIPHY for days, with about 64 million views.

According to the brand, in less than two weeks, its GIPHY channel had about 160 million views, crossing local and global brand accounts in visibility with more GIPHY views than the official Pokemon channel. The brand said that even the slow Christmas months worked in favour of Pants Bear, with Pants Bear’s Christmas and New Year’s wish GIFs garnering about 10 million views combined. The brand also added that in around early January, it garnered about 310 million views with seven stickers making it into the global top five in GIPHY and Instagram Stories filters as well, where Pants Bear stickers were actively used to enhance Instagram Stories.

The brand said that Pants Bear’s Christmas special on YouTube garnered about 30,000 views, which its watch time increasing by approximately 130%, its subscriber base by 4%. Between Christmas and New Year, Pants Bear also received two broadcasting offers from the US.

According to the brand, by the end of February and leading into March 2021, Pants Bear’s official GIPHY account had about 800 million views and Tenor hitting about 400,000 confirmed shares. Pants Bear also said that going from a children education platform to a sticker sensation was “meteoric”. It has also started work on a fully-fledged mobile sticker application for iOS, which is due to be released this year.