With most of the world issued a lockdown order, brands have had to find new ways to reach and continue to engage their customers at home by turning digital. Together with DSTNCT and its more than a decade-long partner Ogilvy, insurer AIA Singapore not only moved its usual football matches and wellness events online, it also moved judges’ hearts at the recent MARKies Awards, which saw it bring home a gold for the Most Effective Use of Influencers/KOLs. Here's a look at how AIA created a successful campaign that turned heads.

According to AIA, Singaporeans and the world’s everyday routines, lifestyles and consumption habits were changed and affected due to the pandemic. This "new normal" - the term pertaining to the sweeping shifts in the status quo - became something to be feared as anxiety about financial futures and job security increased due to the economic downturn, said AIA.

In light of this, AIA saw a need to reimagine other ways it could deliver its brand promise, enabling healthier, longer, and better lives among Singaporeans through its network of ambassadors. The insurer decided it had to come up with a creative solution to do so amid heightened social distancing rules and the restrictions, which prevented community activities as its regular football engagements and wellness events had to be put on hold.

The brand said that it has been providing care for its consumer’s holistic well-being and has to go beyond providing peace of mind to its customers. AIA added that it has to continue to put its customers first and offer genuine and integrated support that will help its users through this transition. This would help the brand to continue living up to its promise despite the pandemic, according to AIA.

Thus, AIA adapted its strategy to suit the environment and ensure the delivery of its commitment. The brand tapped into its existing channels, ideated relevant content across multiple platforms and explored the multifaceted ways it could achieve its promise.

According to the brand, it had to leverage its family of ambassadors and key opinion leaders (KOLs) to crystallise its role in the minds of customers and energise the AIA community, engage them in entertaining ways, and closely connect with them in ways that would resonate, even in virtual spaces.

The insurance company, therefore, landed on its campaign #EmbracingNewNorms, an integrated campaign that sought to educate, uplift, and empower Singaporeans to live their best and healthiest now and in the long term. This was bolstered by its international ambassadors. AIA said that the campaign is about making its brand matter by addressing and predicting the changing needs of its stakeholders, namely being able to adapt to and adopt new norms more easily, staying productive by achieving new goals and learning more about new opportunities for growth.

The company added that to generate real results, it had to encourage embracing new norms across its entire ecosystem. This was done by ensuring that its brand campaign initiatives, activities, and content were effectively amplified by its global and local influencers. By creating a community united behind authentic and holistic messaging that resonated deeply with its stakeholders, AIA said that this kept AIA top of mind as the industry leader that stood by customers through it all.

AIA launched a PR-led year-long campaign to help Singaporeans make sense of and embrace the new normal every step of the way. The insurer mobilised its local and global ambassadors to front key activities that reinvigorated interest in the brand, and assured Singaporeans that they were in good company during challenging times. It used its community of KOLs to establish a strong support network for embracing new norm across media outlets and social media platforms. The brand also said that it harnessed its PR capabilities to reach its audiences remotely to increase the sense of an international community.

As part of the #EmbracingNewNorms Challenge, AIA engaged its audiences through a social media contest to share the most creative ways to stay active using ordinary house supplies during the circuit breaker.

One of its global ambassadors, David Beckham, tried out a suggestion coming from AIA’s audiences and created a makeshift table tennis game. According to AIA, this stirred excitement around other ambassadors’ and its followers own takes on the challenge. The challenge was covered by The Straits Times. The brand also hosted an online regional health and wellness event, AIA Live, spanning 15 markets in August 2020. The company said that this included about 30 unique sessions on health and wellness led by its KOLs, and was designed to appeal across all age groups and multiple markets by celebrating the cultural diversity of the region while bringing people closer together by living healthier in fun and engaging ways. 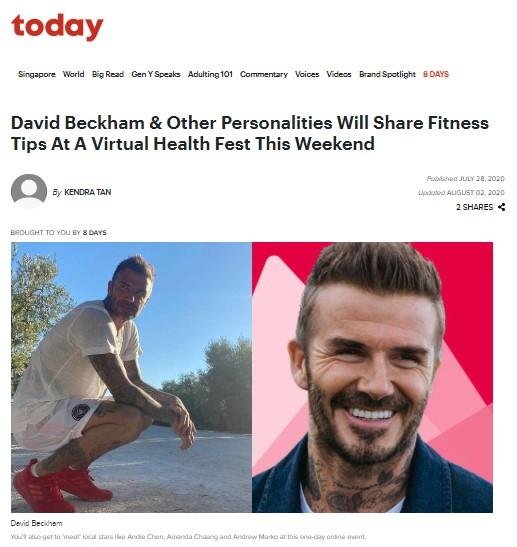 Beckham opened and closed the event and was supported by about 20 other regional influencers and keynote guests. The event garnered positive coverage from local and regional key dailies, trade titles, and consumer publications before, during, and weeks after it was held online, according to AIA.

The insurer also provided consumers actionable tips and tricks through a content series that educated approximately 1.2 million followers on how to embrace the new norm. This ran on AIA’s social media channels such as Facebook, Instagram, and Linkedln.

The brand also said that on top of COVID-19 updates, stay-home webinars, and useful information about its products and services, it leveraged the influence and skillset of its global ambassadors such as easy-to-follow healthy recipes from the founder of School of Wok Chef Jeremy Pang. AIA said this proved particularly relevant to our customers amid COVID-19, as it conducted a study in mid-June 2020 that showed that customers had prioritised making healthier choices. The brand said that it saw an improvement in Singaporeans’ lifestyles and mindsets amidst COVID-19. In a study done by AIA in mid-June, the results showed that 93% prioritised staying healthy over other pursuits to get through the circuit-breaker. Majority of respondents (75%) recorded an improvement in at least one aspect of their well-being within eight weeks from the start of the circuit breaker. Almost half reported better eating habits, experienced better physical health, recorded a more optimal sleeping pattern, and 30% had improved mental health.

AIA said it understood that to help Singaporeans fully adapt to the times, it had to maintain a holistic approach to protecting their wellbeing across their financial, physical, and mental health - an approach championed by its integrated #EmbracingNewNorms campaign.

The insurer added that equipping its audiences with the support they need and strengthening its presence as their partner— not payor—in life. The brand also added that it remained well-positioned to keep enabling Singaporeans to live healthier, longer, and better lives with the help of its robust network of ambassadors.