Dairy Farm's Market Place by Jasons will today unveil its biggest brand push this year, with a story-led campaign themed around four core components of life: self, family, friends and love.

Created by independent creative firm Serif, the campaign - Joy on a Plate - taps into the popularity of food sharing on social media and asks social media users to show their personal stories by using ingredients from the supermarket to build on the four themes.

The campaign is hosted by local actor Jason Chan (陳智燊) and actress Sharon Chan (陳敏之). Both share their personal stories according to each theme in four weeks on the brand's Facebook page. The ‘joyful plates’ are created with a mix of fruit and vegetables chosen by the celebrities themselves.

"The idea is to get our ambassadors engaged in this campaign to enhance the authenticity of the video," Elman Lee, group marketing and online business manager at The Dairy Farm, told Marketing.

Joy, the theme born from last year's branding push ‘Moments of Joy’, is designed to add value to the supermarket of which positioned as a "lifestyle supermarket", bedsides telling differentiation from the four other brands under The Dairy Farm umbrella.

"Happiness is an intangible asset that we believe is best represented by food, and food itself is an effective means to tugs people's emotions. We help to spread the message of 'add a little joy' via this interactive food art campaign."

"The soul of the campaign is the real life stories not only from the celebrities but also from consumers. This sense of personal touch helps craft a strong brand character for Market Place by Jasons beyond solely promoting happiness," said Kwan.

The campaign, Lee added, is the first attempt for the brand to "boldly embrace" a content-driven approach.

To boost engagement with consumers, social media users are invited to ‘Like’ the two ambassadors' stories on the company's Facebook page and to submit their personal stories of joy each week by creating their own ‘Joy on a Plate’.

Rachel Wong, strategic planning director of UM, the media agency behind the campaign, added although Facebook is the top portal to communicate the brand to consumers supplemented by television, corresponding in-store decorations and activities are equally important so as to reach consistency of a brand campaign.

For example, in order to cooperate Jason Chan's biscuit-made plate creations telling the story of how he earned a medal from his childhood, selective biscuit items in the store will response with a promotion period throughout the week.

"The campaign is an extension phase rides on the previous branding push last year. This story-led communication marks a big step in the brand building process and paves the way for future brand development."

"We feel like we are creating a story more than advertising."

The campaign marks the second time The Dairy Farm works with Serif, an independent creative agency established in 2011, after handling the launch project for Jasons Food & Living at Hysan Place two years ago.

Lee said this second collaboration is built on the previous success of the Jasons Food & Living project, and added a thorough understanding of the brand's background and assets is top priority when picking agencies.

Alongside the campaign is a charity move in which customers can collect four limited edition ‘joyful plate’ premiums at HK$15 each from which HK$2 contributes to Orbis. 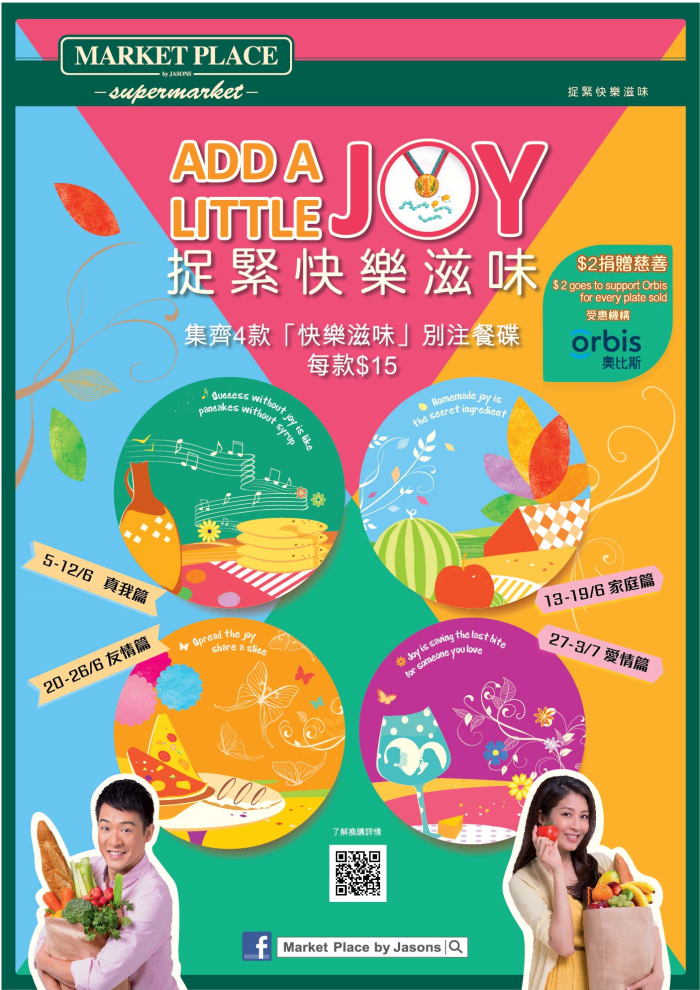