Manulife Singapore has launched a critical illness campaign that seeks to honour the unbreakable spirit of critical illness patients and their caregivers. Called #Unbroken, the campaign centres around a short film that looks to highlight the strength of Singaporeans in the face of an unexpected critical illness.

Conceptualised by Tribal Worldwide Singapore, the spot titled "The Unbroken", tells an emotional story of a family of five, and their unbreakable spirit in the face of adversity. Set in both the 1960s and present day, the film also touches on familial responsibility, which is a priority for many Singaporean families. The themes that the film seeks to bring to life include family bonds and filial piety clashing against the unpredictability of life.

An integral part of the film is its soundtrack, featuring the classic Hokkien ballad 爱拼才会赢. According to Manulife Singapore, the song was chosen to uplift the film’s impactful story.

The song was re-scored and sung by local Getai legend, Wang Lei for the film.

In a statement to Marketing, Cheryl Lim, VP and head of brand, communications and sponsorships at Manulife Singapore said that the film particularly aims to target those aged 35 to 50. Hence, the film was shot in Hokkien and included a song from the 1960s, sung by a Getai singer. The film will be launched on Manulife’s YouTube channel and social media platforms, and will air in cinemas from 26 March to 16 April 2020. While the creatives were by Tribal Worldwide Singapore, media was done in-house.

The campaign was a result of a study on critical illness revealed that close to 40% of respondents have spent all or most of their savings battling illness. Commissioned by Manulife Singapore, the report stated that financial concerns are among the biggest challenges faced by critically ill, and prolonged period of illness could lead to permanent reduction in one's income. The study was done on 500 critically ill patients and caregivers to shed light into the real experiences, challenges and fears they face. According to Manulife, the main takeaway was that critical illness does not just impact the patient, but those closest to the patient as well, particularly the caregivers.

Benson Toh, Tribal Worldwide’s creative director said that the story hits a nerve because it affects many families at different points of their lives. “As we bring out the unbroken spirit of people against adversity, we are also creating a space for the viewers to ponder: when we encounter sudden setbacks, how can we continue to fight for ourselves and for our family?” he added.

Prior to the official campaign roll-out, outdoor advertising was kicked off on taxis. The creative “duct tape” concept on the taxi’s jewel top and body wrap was inspired by Manulife’s critical illness product which has a unique selling point of “Cover Me Again and Again” benefit. The creatives of the taxi were done as a standalone from the video, yet synced through the campaign’s tagline on the bumper.

In addition, the campaign is currently also supported by a dedicated interactive microsite. Through a personality quiz, visitors are encouraged to zoom into each campaign element and product feature, and relate back to each individual’s needs and priorities and gain a better understanding of the best coverage most suitable for them.

According to Lim, the Manulife Singapore team needed a connecting bridge from the film and getting consumers to understand the critical illness better. As such, the microsite and interactive quiz was initiated. The personality quiz will include questions such as age range, if he/she has experienced any health issues, and how he/she would tackle a problem. The answers will be tied to the three different types of critical illness benefits under Manulife, as well as various types of chocolates. This may include pure chocolate, chocolate wafer or even a mix of different chocolates. 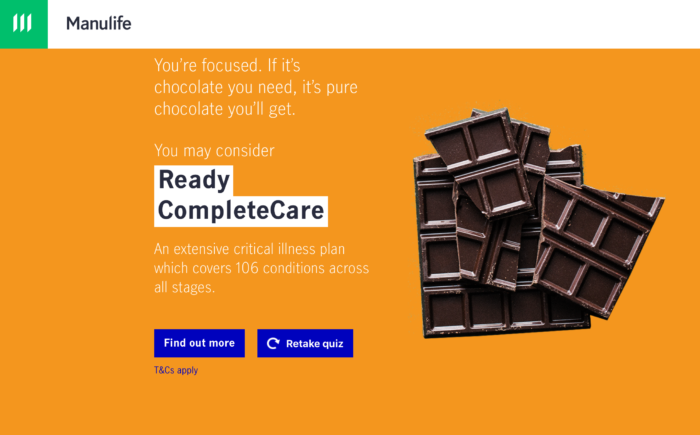 “We were inspired by the unwavering spirit and grit of patients with critical illness and their caregivers. The sad truth is that patients and their loved ones are all impacted when illness strikes. This is especially grave if the patient is the breadwinner of the family. With #Unbroken campaign, we hope more Singaporeans recognize the realities of being sick and think about critical illness protection more seriously, rather than an afterthought,” Lim added.