Coca-Cola gets personal in the Philippines by dropping its iconic logo on some of its bottles to start calling their Filipino customers by name.

A number of regular 250 ml, 300 ml, and 500 ml PET bottles of Coke will be personalized with popular names and endearments as part of the “Share a Coke” campaign. Launched in Australia in 2012, it has since rolled out in 50 countries and is coming to the island nation for the first time.

“We brought Share A Coke to the Philippines with one goal: to share happiness. Sharing a Coke is a simple yet fun and exciting way for us Filipinos to be able to show our appreciation to those who make us happy,” Coca-Cola Philippines marketing director Jasmin Vinculado, said in a statement posted in the Star.

Share a Coke will initially feature 250 of the most popular names in the Philippines but Coca-Cola has let locals to vote online for the next 50 names to be added on the list via the #ShareACoke Philippines official Facebook page. Marketing understands that McCann Worldwide is their agency locally.

And for those who can’t find their names on store shelves, Coca-Cola will be setting up special electronic kiosks in select supermarkets in Manila and key provinces to let shoppers customize their bottles for themselves. Schedules for the Share a Coke tour are announced on its Facebook fanpage.

Below is a list of the 250 initial names that will be featured on the Share a Coke campaign for the Philippines from 9Gag. 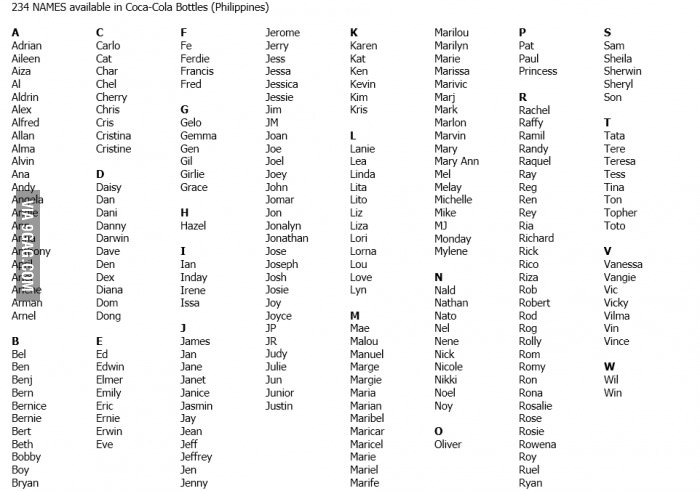