Seems like the Singapore Civil Defence Force has a wicked sense of humor.

SGAG then tweeted: ‘The @SCDF just followed SGAG on Twitter. Well, umm, thank you? I’ll call u when my cat gets stuck on the tree?’

This was met with a response by SCDF saying: “Cats are too adorable. You know our number @SGAG_SG: #995”

SCDF then compiled the conversation posting on its Facebook page with the caption:

SCDF could not get back with a response at the time of writing. 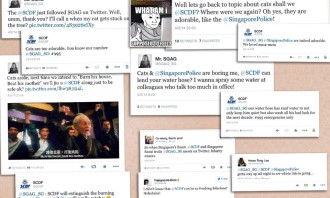 This is not the first brand to try and leverage off of SGAG’s social media following. Budget airline Scoot is also often seen interacting with the site.

Deleting texts on FB Messenger is now possible, but should brands do it?

Conversations with overly-deleted messages just means that the integrity of the conversation was compromised. ..

"His action is a serious failure of duty."..